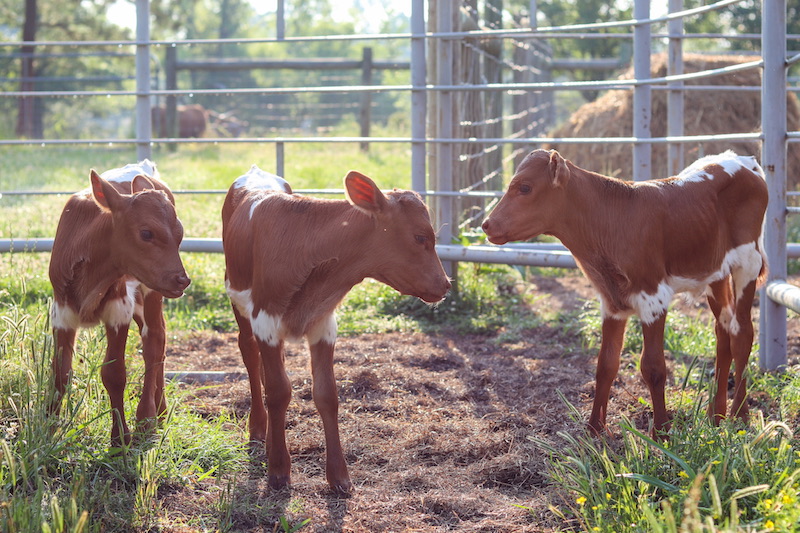 Barbwire Farms in Wilsonville is home to the first-recorded longhorn triplets born after the mom gave birth in May. (For the Reporter/Kristi Johnston)

WILSONVILLE – Rounding the corner of the barn on his Wilsonville farm, his jaw dropped and his eyes popped out of his head in disbelief.

W.B. Stewart thought his mind was playing tricks on him when he saw three longhorn calves feeding around adult longhorn and mother cocoa fudge.

“I couldn’t even speak. It took me forever to wrap my mind around how that was possible,” Stewart said. “I was trying to figure out where they came from because none of our other longhorns were due to give birth and all three were nursing off of her.”

The reason for his confusion was due to the historical nature of the moment.

According to Stewart, longhorns rarely give birth to twins and when they do, it’s very dangerous with either the mother or one of the calves not surviving.

But Stewart began to wrap his mind around the fact that Cocoa Fudge, the first longhorn he ever purchased five years ago, had just given birth to triplets and did so unassisted and naturally.

“We knew she was going to give birth anytime and kept checking on her every day,” he said.

But the day she gave birth, torrential rain hit the Wilsonville farm, which kept Stewart and his wife from being able to see the calves. He noticed she had given birth that morning when he went to feed them and one teet was smaller than the other due to nursing.

The rain, however, kept him from seeing even one of the calves that day.

The following afternoon, Stewart got his first glimpse of a calf longhorn he and his wife named Mu. At the time, he thought that was the only one born. Little did he know then; Mu was actually the second of three birthed by Cocoa Fudge.

One day later and two days after the rain storm, Stewart was headed back out to feed and check on the longhorns when he rounded the barn and saw three calves that looked identical feeding off of their mother.

“The first thing I did was question whether anyone else around us had longhorns, and if they could be in my pasture,” he said with a laugh. “That’s when I realized they were all identical and the same color as to previous calves she had given birth to. I was in shock.”

At the time, Stewart didn’t realize the historic moment he witnessed, but come to find out, there have been no other recorded births of longhorns according to the Texas Longhorn Breeders Association. 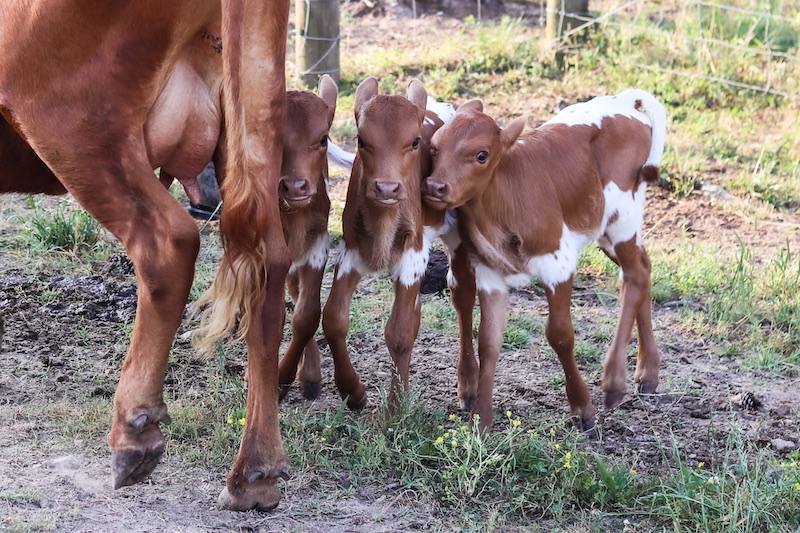 All three calves, named Alpha, Mu and Omega, are healthy and being cared for by mother Cocoa Fudge and the farm’s owners. (For the Reporter/Kristi Johnston)

The first action of Stewart after that was to send a picture to his wife at work saying “Surprise.” She responded with a shocked, “What is that?”

He then called his father, who managed a cattle ranch in Florida, and that’s when he started to realize just how rare what he just witnessed was.

“Multiple births, such as twins, the chances are one in 100,000,” Stewart said. “Longhorns have an even lower rate of multiple births. We don’t really have a good number, but even after more than 2 million people have seen our post about the birth and sharing it with official organizations, nobody has seen triplets before. The association seemed surprised and shocked.”

The three calves have since been named Alpha, Mu and Omega after the Greek alphabet and can only be told apart by a slight difference in the amount of white on their front shoulder blades.

Now, the focus has shifted from amazement to keeping them all safe and healthy.

“The good thing is the calves seem to be healthy,” Stewart said. “Mom isn’t typically able to make enough mil for three at once, so on certain days, we send her out with a certain calf and bottle feed the others, then some days we let all three go out with her. We try to keep a good eye on their health and mom’s ability with each three.”

Most times with multiple births, Stewart said the mother tends to cut off one of the calves, leaving it to the owner to take care of, but Cocoa Fudge has been accepting of all three of her calves.

Omega was the hardest to bottle feed, which meant she had to go out with mom more often, but now she and the other two all seem to be developing at a normal rate.

Alpha also had a scare with a lump under the chin, but it turned out to be a nick from a horn and nothing serious.

“We continue to check on their health and progression every day. It’s truly a remarkable situation,” Stewart said.

Since their story has made waves across the internet, Stewart said he has gotten messages from cattle producers across the country raising thousands every year who are just as amazed as he and his wife were at the sight.

What started as a dream of following in his grandparents’ footsteps of raising cattle seven years ago with the purchase Cocoa Fudge has now turned into history.

To follow the story of the first recorded longhorn triplets, visit Facebook.com/barbwirefarms and Shelbycountyreporter.com.