CHELSEA—Joscelyn Butler, a 9-year-old Chelsea resident, will compete on the national stage in July as a contestant in the 2021 USA National Miss.

Butler qualified for Nationals after being named Alabama’s 2021 USA National Miss Princess in the state’s annual pageant earlier this year.

Next month, however, she will travel to Orlando to compete against 39 other girls for the opportunity of winning $100,000 and a prestigious national title.

The pageant will span July 4-10 and encompasses a variety of challenges including a fashion show, an evening gown session and an interview with judges. 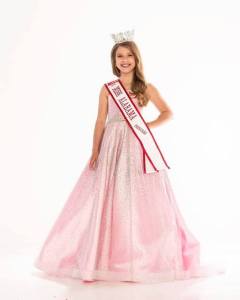 Despite the fierce competition, Butler said she is not deterred, and has been participating in pageants since she was a toddler. Butler and her family have lived in Chelsea for the past 15 years, where she first discovered her passion for pageantry after competing in several local competitions.

“We put her on the stage and she has just loved it. It really helped her build confidence, and she has never wanted to quit since, even after we offered several times,” said Christie Butler, Joscelyn’s mother. “She loves being able to use her platform to bring awareness to issues that are important to us.”

The young Butler has dedicated much of her platform to championing community causes, whether anti-bullying initiatives, elder care or the empowerment of at-risk youth.

Most recently, Butler raised money to provide several graduation presents to the foster children of King’s Home in Chelsea. Her mother works at the organization and said they learned of a graduation ceremony being planned for the home’s graduating senior class.

“We noticed that they weren’t getting a ton of gifts like graduates usually do, and I was like what if we give them a Bible to help them with their next steps,” Christie said.  “So, I talked to Jocelyn about it, and just how important this was, and she said let’s see if we can do it.”

So, the two began requesting money from neighbors in order to create several engraved Bibles. However, they were shocked when they received over $2,000.

The two set out to create 12 Bibles as well as additional gifts for the graduates. With the extra money raised, Butler and her mother purchased toiletry bags as well as $50 gift cards for each graduate as many are going off to college this fall.

“The community really stepped up and wanted to be a part of that, and we were also super excited to be able to provide them with something they could take into that next step of adulthood,” Christie said. “It was just important to us. I felt like we had to give them  something to help lead them.”

Lew Burdette, president of King’s Home, said Butler’s act of kindness was a huge blessing for the home’s children as they enter a new phase of life.

“We could not be more appreciative of Joscelyn. She never imagined the outpouring of support for her fundraising idea and her passion to serve is a blessing to the graduates and a gift to us all. She is a special young lady,” Burdette said.

Butler and her family have also worked to bring light to other issues such as invisible disabilities, specifically traumatic brain injuries.

Much of this activism stems from the family’s own experience as Butler’s brother suffered a traumatic brain injury in 2014. Following her brother’s accident, Butler joined pageantry as a way to help her brother and raise awareness about this issue.

Over the past several years, Butler and her family have raised over $2,000 for Children’s of Alabama in order to help those with this condition.

She recently helped raise awareness about this issue at her school after her brother was bullied. As a result, Butler launched the initiative ‘Crown C.A.R.E.S: Creating a Respectful Environment in Schools.’

As part of the initiative, Joscelyn created several bracelets with messages promoting kindness for her fourth grade class at Forest Oaks Elementary School.

“She knows how important it is not to judge anyone, and to always be kind, and I appreciate that about her because I wish there were more kids like that, and that knew the importance of that trait because she has seen the power of it firsthand,” Christie said.

Every year, Joscelyn and her family also participate in the University of Alabama Dance Marathon, which exists to raise funds for children being treated at Children’s of Alabama.

As Alabama’s most recently crowned National Miss Princess, Joscelyn and her family said with that title comes a responsibility to care for the community.

“We just talked about if we are going to do these pageants and have this title then we should also be confident and comfortable within ourselves to speak about these important issues, like promoting kindness, and it really sparked something within her,” Christie said. “She’s not afraid to talk about it, and to tell people to straighten up or to step up for somebody. It’s really created a strength within her that has made me really proud.”

With nationals approaching, Butler said she has been practicing every day and is specifically excited for the interview portion of the competition, during which she will discuss her platform and community service.

“I enjoy doing that the most, and I am excited. There is a lot of practice going into this, and I just can’t wait until it’s here,” Butler said.