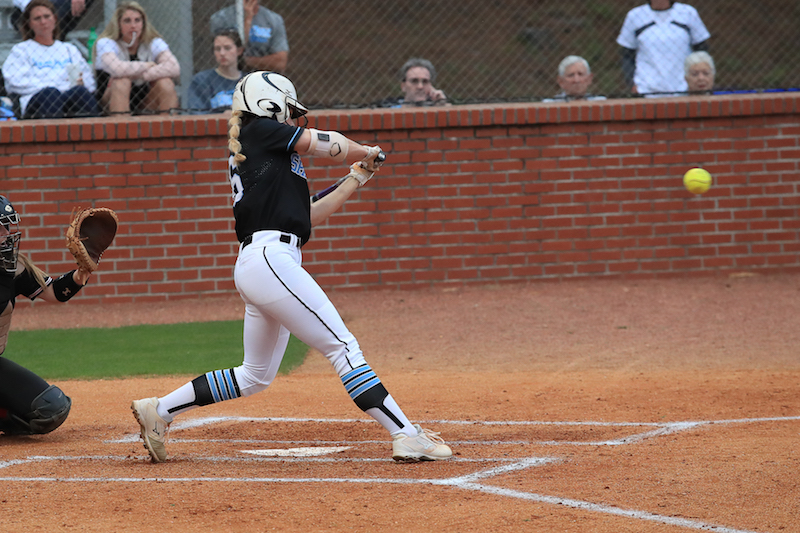 Annabelle Widra has been named this year's Gatorade Player of the Year for softball in Alabama after a remarkable year in the circle and at the plate. (For the Reporter/Dawn Harrison)

HOOVER – Spain Park standout Annabelle Widra has now won both of the state’s top awards following her senior season and a remarkable six years as a starter.

The pitcher and infielder for the Jaguars was recently named the state’s Miss Softball winner by the Alabama Sports Writers Association, and on Friday, June 18, she was named the state’s Gatorade Player of the Year winner for softball.

With that, Widra becomes the fourth athlete form the county to win the prestigious award, which honors the state’s top athlete from six boys and six girls sports each year.

It continues a special run of postseason awards for Widra, who spent six years as a starter for Spain Park and has left her mark as one of the state’s best high school softball players in history before heading off to the University of Michigan.

During her senior season with the Jags, Widra was dominant in the circle, as she was all six years, by finishing with an ERA of 1.20 and a record of 20-5.

That earned her the Pitcher of the Year award in Shelby County, while she also totaled 236 strikeouts and gave up just 63 hits, which was half of what the next closest pitcher in the county was able to do.

But her versatility is what makes her one of the top softball players in the country as an All-American.

In addition to baffling batters with her arm, she pressured defenses with her bat.

In the batter’s box this season, Widra put together a .490 batting average and tied for the most home runs in Shelby County with 15. She totaled 49 hits and 47 RBIs and drew a county-high 30 walks because of her dangerous bat.

Once on base, she also racked up 32 stolen bases, which was the third-highest mark in the county.

Widra is also the first Gatorade Alabama Softball Player of the Year to be chosen from Spain Park High School, which is an impressive feat considering the successful talent the Jags have produced under head coach C.J. Hawkins.

It put a fitting cap on a career that featured more than 1,200 strikeouts.

The award, which recognizes not only outstanding athletic excellence, but also high standards of academic achievement and exemplary character demonstrated on and off the field, distinguishes Widra as Alabama’s best high school softball player.

It also makes her a finalist for the prestigious Gatorade National Softball Player of the Year award to be announced in June.

A Premier Girls Fastpitch All-American, Widra is a five-time All-State honoree and has been named to the All-County first team since her seventh grade year, earning at least a share of the Player of the Year award each year since the eighth grade.

In addition to excelling on the field, she has served as a special education student aide at Spain Park and held a GPA of 3.80.

Through Gatorade’s cause marketing platform “Play it Forward,” Widra has the opportunity to award a $1,000 grant to a local or national youth sports organization of her choosing.

Widra is also eligible to submit a 30-second video explaining why the organization they chose is deserving of one of 12 $10,000 spotlight grants, which will be announced throughout the year.

To date, Gatorade Player of the Year winners’ grants have totaled more than $2.7 million across 1,117 organizations. Since the program’s inception in 1985, Gatorade Player of the Year award recipients have won hundreds of professional and college championships, and many have also turned into pillars in their communities, becoming coaches, business owners and educators.