Vincent ready for full slate of games in 2021 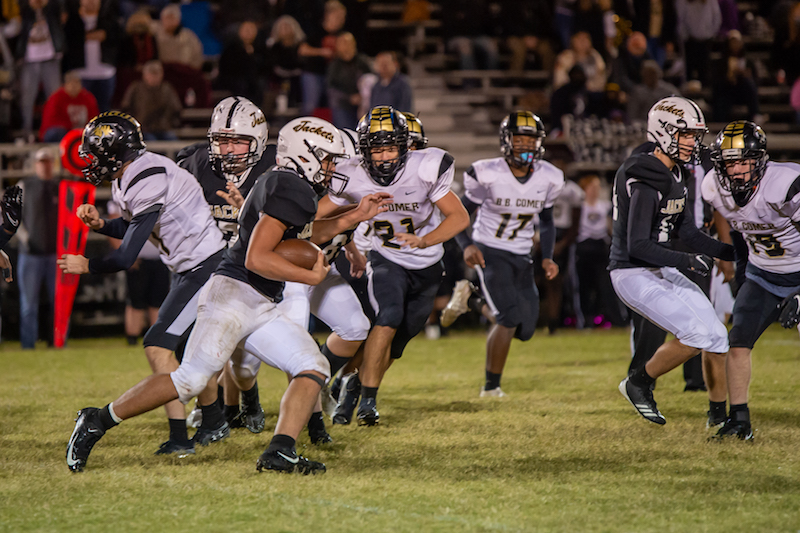 The Vincent Yellow Jackets will look to improve on last year's 3-7 record with a full slate of games this season after forfeiting three due to COVID-19 a year ago. (For the Reporter/Larry Dancy)

Possibly no team in Shelby County was impacted more by COVID-19 than the Vincent Yellow Jackets a season ago.

Forced to cancel their first three games of the season due to the virus, the Jackets started 0-3 out of the gate, including 0-1 in area play.

Vincent bounced back with two wins in a row after that, but went on to narrowly miss the playoffs under third-year head coach Lucas Weatherford.

Heading into the 2021 season, the Yellow Jackets continue to grow momentum in the program under Weatherford and are more than looking forward to a full schedule this season after last year’s 3-7 record featured three forfeits.

Vincent will open the season at home against Winterboro in a Thursday night matchup on Aug. 19, making them one of the first teams to kickoff this season.

A 1A team, Winterboro picked up a forfeit win against the Jackets a season ago and went on to finish 9-2 overall last year with a berth in the second round of the playoffs.

That will be followed by two consecutive road trips to Billingsley and Ranburne on Aug. 27 and Sept. 3, respectively.

Both Billingsley and Ranburne finished under .500 a season ago, making them two important early games this season.

Billingsley finished the season 5-6 in Class 1A last year with three of those wins coming via forfeit, including the one against Vincent, while Ranburne closed the season with a 4-6 record.

Ranburne will mark the area opener for Vincent, making it an important early-season game.

The Bulldogs finished 3-4 in region play last season with Vincent’s forfeit counting as one. Following that, however, they lost five in a row, while the Jackets won two in a row.

Following their two road games, the Jackets will return home on Sept. 10 for a matchup with Horseshoe Bend.

It marks another great opportunity for a region win, as the Generals finished last season 1-9, including a 39-32 loss to Vincent, which became the Jackets’ first game of the season.

Vincent will then hit the road again a week later on Sept. 17 for a matchup with Fayetteville. The Jackets picked up a 41-34 win against the Wolves last year and will look to pick up another region win this season heading into a bye week.

Following a bye week on Sept. 24, Vincent will hit the road again for the fourth time in five games when the Yellow Jackets travel to Lanett on Oct. 1.

Lanett, who made the quarterfinals of the Class 2A playoffs last year, beat Vincent 50-7 a season ago and finished with a 10-3 record.

The Panthers lost just three games and all came by seven points or less and will be the favorite to win the region title once again this season.

Vincent will get a welcome sight as the Jackets return home after that difficult matchup to take on region foe Randolph County on Oct. 8.

The game marked Vincent’s closest loss a season ago in a 56-38 game, meaning the Jackets will be hoping to flip the script this season in a bid for the postseason.

That will be followed by a trip to region runner-up B.B. Comer, who finished the 2020 season 9-2, including a 51-0 shutout victory against the Jackets.

Vincent will then play its final region game and final home game of the regular season on Oct. 22 when the Jackets host LaFayette, who they lost to 39-19 last season. The Bulldogs finished 5-5 overall a year ago, and this year’s game between the two could become key in playoff seeding or earning a spot in the postseason altogether.

The Yellow Jackets will then put a cap on their regular season on Friday, Oct. 29 with a road trip to 3A Prattville Christian.

Vincent will look to not only win that game again this year, but use it as a confidence builder for the playoffs.

Going into the season, the Jackets will be looking for their first playoff berth since 2018, which was Weatherford’s first season.