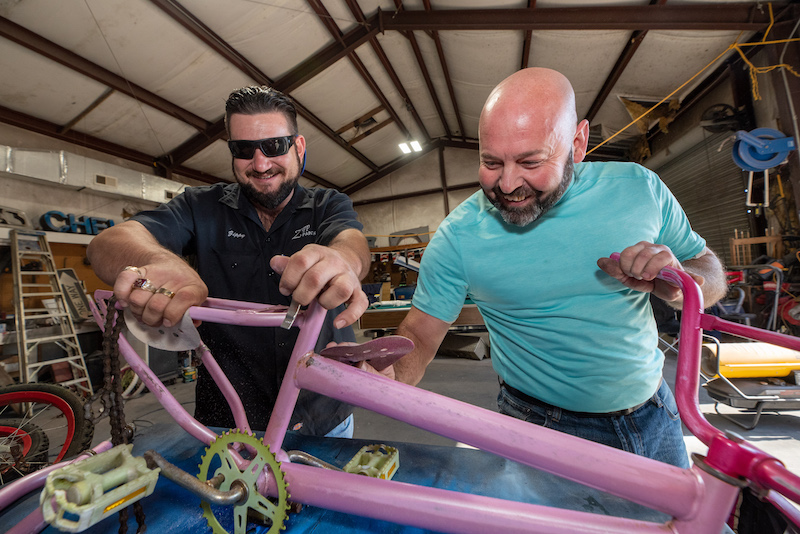 SHELBY – Chelsea’s Charlie Bradford answers questions frequently about an organization he founded last year to provide bikes for children who do not have them.

On Sunday, June 27, Bradford will be available to answer people’s questions—and to accept bikes, bike parts or money they want to donate to the cause—at a fundraising event for Bikes 4 Kids Inc. at Shelby Iron Works Park.

The family-oriented event is free to attend and will feature bike giveaways, free helmets, raffles for gift cards from local businesses, bounce houses and food trucks.

“We will give away some really nice bikes,” Bradford said, adding the park offers plenty of space to ride.

The event starts at 1 p.m. and will serve as an opportunity not only for Bradford and his volunteers to give away more bikes, but also to spotlight the organization’s mission and how residents can contribute to it.

The idea for Bikes 4 Kids came to Bradford in November 2020, after he offered to repair a friend’s son’s broken bike pedal and went a step further, adding new details to the bike.

When he returned the bike to the child, Bradford said his reaction was priceless. Bradford realized he could bring the same happiness to other children simply by restoring and customizing old bikes.

He teamed up with Zac Ingram, owner of Z.I.P.P. Painting in Chelsea, to begin the process of collecting and restoring bikes for kids at Christmas.

Bradford created a public group on Facebook called “Bikes 4 Kids Inc. (nonprofit organization).” By the fourth day, Bradford had received 30 recommendations of children who needed bikes, and by the end of the week, his Facebook group had nearly 300 members and countless messages.

The group currently has 1,600 members.

“We furnished bikes for almost 200 kids at Christmas,” Bradford said, noting many of the bikes were also customized according to the children’s personalities and interests. “We’d like to double what we did last year. It all depends on the participation we get from everybody else.”

The bikes are given to children at no cost to their families.

Bikes 4 Kids also provides food and clothing for children in need and contributes to the Shelby County Foster Parent Association.

“It’s been great to do this and help our community like this,” Bradford said. “It’s worked out really well.”

Bradford said those who donate bikes at Saturday’s event will receive a discount on their next meal at VJ’s Restaurant and Bar in Shelby.