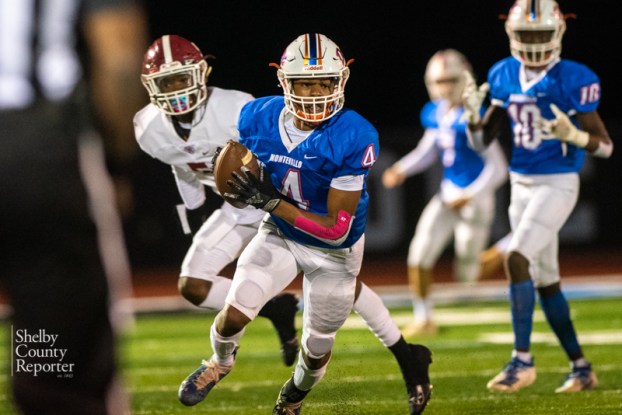 The Montevallo Football team will look to build off of last year's successful first season under Blake Boren when they take the field this season. (File)

The Montevallo Bulldogs capitalized on their 2020 football schedule by exceeding expectations during head coach Blake Boren’s first year at the helm.

Now, heading into the 2021 season, they’re looking to build even more on a schedule that is again filled with opportunity for a special run.

Last year, the Bulldogs opened 0-4 after forfeiting their opener against Marbury and then losing to Shelby County, American Christian and Bibb County.

Montevallo, however, bounced back with six wins in a row to end the regular season and pulled off a week-one upset against St. James in the opening round of the playoffs before falling to Handley in the second round.
Albeit three wins were due to forfeits, it was an impressive finish to the season for Montevallo, who finished 7-5 overall last year and earned a trip to the second round of the playoffs for the first time since 2016.

With young players now experienced, the Bulldogs hope to take it a step further this year.

It will have to come in a region that features top teams American Christian and Bibb County, but Montevallo finished third behind those two powerhouse teams a season ago, and will now hope to battle for one of those top two spots.

The Bulldogs will take on both early in the season once again, but not before two non-region games to open the year.

Montevallo will open the season on Friday, Aug. 20 against Marbury at home, which should be an entertaining matchup after the Bulldogs were forced to forfeit last year’s opener against Marbury.

It will mark a matchup against a 5A team that finished 6-5 a season ago for 4A Montevallo early in the season, making it a tough test to start the season.

A win, however, would set the tone going into a week-two battle against Shelby County on Aug. 27.

The Bulldogs will be battling for redemption against a second 5A classification team in a row to start the season after losing to the Wildcats 20-18 in a thriller last year.

Shelby County will also be under first-year head coach Zeb Ellison, which should add even more intrigue to the rivalry battle, as two former players will be leading each team.

That will lead into the difficult stretch of back-to-back road games against last year’s region champion and region runner-up.

Montevallo will start with American Christian on Sept. 3—a game the Bulldogs lost 63-31 last year.

But Montevallo hung around in that game, while the Patriots went on to advance to the semifinals of the Class 4A playoffs.

A week later, the Bulldogs will take on Bibb County, who finished last season 10-3 and made the quarterfinals of the playoffs. Montevallo lost that matchup 37-7, and will look to bounce back with an upset early this season.

Montevallo will play a third game in a row on the road against Wilcox Central on Sept. 17 before a bye week.

Last year’s game against Wilcox was canceled due to the Jaguars forfeiting the entire season.

The Bulldogs beat West Blocton by one point, picked up a forfeit win against Sumter Central and beat Holt by seven during that three-game stretch on the road last year.

That marks possibly the most important stretch of the season for the Bulldogs with all three being region games and impacting playoff seeding.

Montevallo will then hit the road again for the final two games of the season, taking on Dallas County on Oct. 22 and Maplesville on Oct. 28 to close out the regular season.

The Bulldogs beat Dallas County 27-29 last year and got a forfeit win against Maplesville before beating St. James to open the playoffs and falling to Handley 42-13 in the second round to end the season.

A brutal start to the schedule sets up nicely for the Bulldogs down the stretch to earn a spot in the playoffs once again, while an upset early in the schedule could create opportunity to battle for a top-two spot out of the region.

Vincent ready for full slate of games in 2021

By ALEC ETHEREDGE | Managing Editor Possibly no team in Shelby County was impacted more by COVID-19 than the Vincent... read more