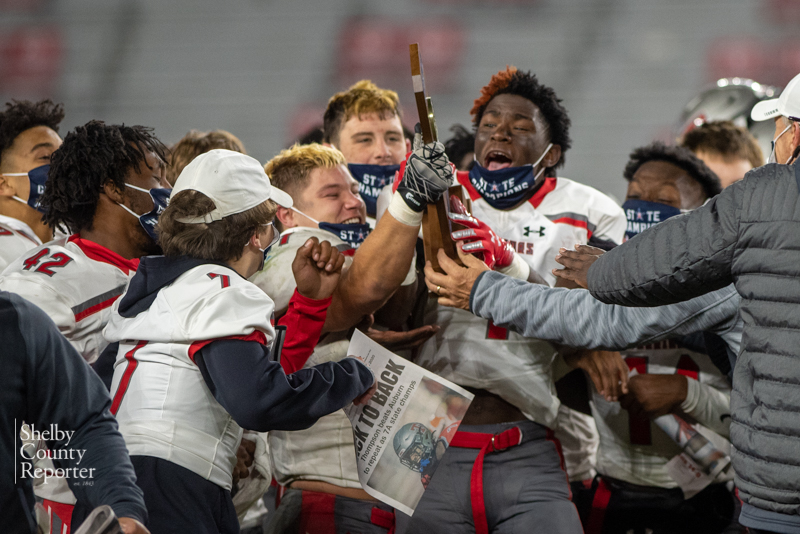 The Thompson Warriors have been ranked No. 5 in the country by MaxPreps heading into the 2021 football season. (Reporter photo/Keith McCoy)

ALABASTER – Heading into the 2021 football season, the Thompson Warriors will do so not only looking for their third state championship in a row but a possible national championship.

A team that has quickly risen the ranks the last six years, Thompson will enter this season ranked No. 5 in the country by MaxPreps, making them one of the country’s top teams.

Loaded with returning players, including several four-star athletes, the Warriors are the hands down favorite to win this year’s 7A title once again, but also have the chip of proving they are one of the best teams in the country on their shoulders.

Thompson finished last year as the top team in Alabama after taking down Auburn in miraculous state championship and finished the season ranked sixth nationally by MaxPreps and as high as second by High School Football America.

During that span, the Warriors failed to have a single season of .500 or higher.

But after back-to-back .500 seasons in Freeman’s first two years, Thompson has gone a combined 49-4 the previous four seasons, making Freeman 59-14 in his six seasons at the helm.

In that time, the Warriors have gained state and national attention for their stellar play, beating rival and state powerhouse Hoover for the first time in school history in 2017 and five other times since, making the semifinals of the playoffs each of the last four years, making the state championship game the last three years and winning the last two titles.

Now, they are ranked as a top five team in the country heading into the 2021 football season.

The Warriors have a right to be ranked as highly as they are nationally with several returning starters on both sides of the ball.

Offensively, the Warriors will return a quarterback who was named the Gatorade Player of the Year after throwing for more than 3,000 yards as a junior, a star at receiver in Ryan Peppins, running back Brandon Franklin and several other elite names.

That doesn’t include new additions such as Jaylen Ward, Justin Pegues and David Moultry, who all should help make the offense even more dynamic.

And that’s just on the offensive side.

Defensively, the Warriors could be one of the best in the country with the return of four-star recruits Jeremiah Alexander, Peter Woods and Tony Mitchell, who are all ranked inside the top 15 for either the class of 2022 or 2023.

In addition to those names, Jax Van Zandt and Nate Riddle will both be back. Talented national recruit Anquon Fegans has also joined the team, while A’mon Lane is expected to make a splash as a sophomore.

There will be a few holes to fill in up front on both sides of the ball and a few other positions, while depth will be key against the schedule they play;  but on paper, they are the best team in the state and one of the best in the country.

If Freeman and the coaching staff get them to work together toward the goal of another championship, Thompson should continue the 18-game win streak it has going into the season and prove its worth at the top of the national rankings.