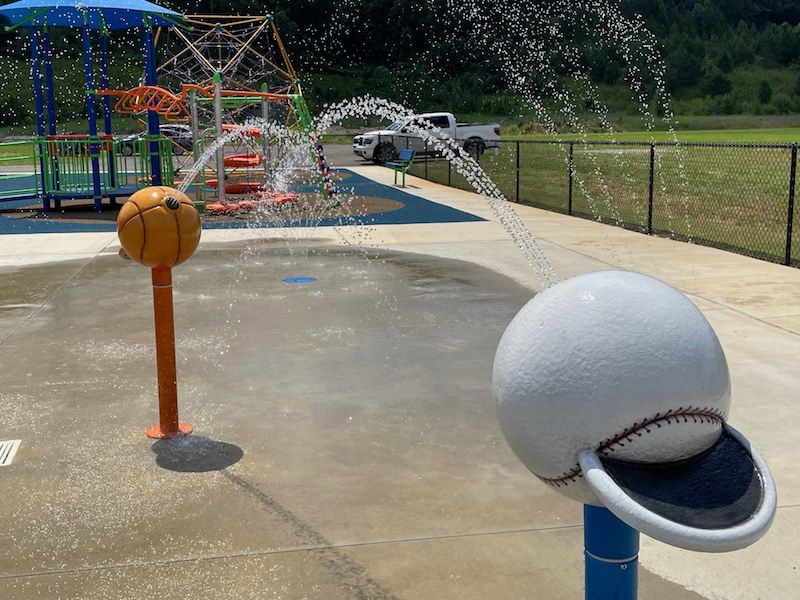 The Splash Pad at Melrose Park behind the Chelsea Community Center is expected to open next week, according to city officials. Above is an example of a splash pad in Clay that recently opened. (Contributed)

CHELSEA – The Splash Pad at Melrose Park behind the Chelsea Community Center is expected to open next week, according to city officials.

Mayor Tony Picklesimer said the city will officially debut the waterpark on Thursday, July 1. The city had initially planned to open the park to the public on Memorial Day, but the date was postponed due to construction and weather delays.

According to Picklesimer, a water recreational facility has been one of the most common requests from residents since he moved to Chelsea 15 years ago.

Now on the verge of completion, Picklesimer said interest has only increased and expects attendance to be high going into the grand opening and for the remainder of summer.

“Adding a splash pad to our city amenities is something that we’ve been wanting to do for a long time. I think it will be a real benefit to our citizens to have a waterpark right here at Melrose Park that will be available for people to use, and I’m sure it will be a very popular spot for our citizens this summer,” he said.

Admission will cost $2 per person and will revolve around a colored bracelet system, with different color bracelets alternating each day. Bracelets will guarantee all-day access, and attendees may come and go from the facility as long as they are able to produce a bracelet upon reentry.

Anyone 1 and older will be required to have a bracelet to be inside the facility and some variety of race will take place with an additional $2 fee entry fee to participate.

According to Picklesimer, the proximity to both Melrose Park and the community center was a driving factor in the facility’s location and said that ease of accessibility at that location was a major consideration during construction.

The waterpark will also complement the greater surrounding area near the community center and Melrose Park. Picklesimer added that the waterpark is part of a larger development project and effort to consolidate the area into a city center.

Even as with ongoing construction at the waterpark, Picklesimer said the city is also planning the development of an amphitheater near the facility.

“We hope that this area will eventually be like a city center, a place where our citizens can go and gather and enjoy those facilities,” he said.