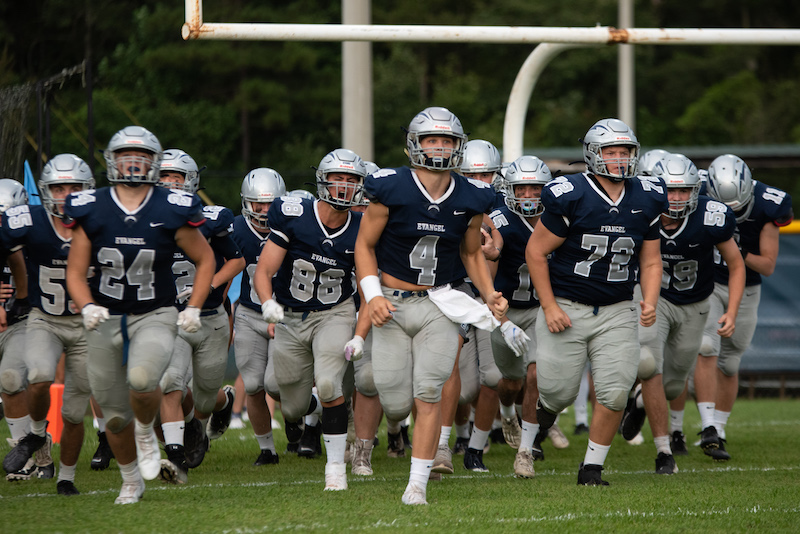 The Evangel Lightning will look to battle through a difficult schedule featuring some of the top 8-man football teams in the country thi season. (File)

ALABASTER – The Evangel Lightning’s path to repeating as 8-man national champions won’t be an easy one with several of the best teams in the country on this year’s schedule.

The Lightning, who missed out on a state championship for the first time under head coach Tim Smith last year, were able to get redemption in the national championship game by beating rival Ezekiel.

With that win, ECS won its second straight national title and will now hope to not only win its third this year but also regain its claim of the ACSC with a state championship this season as well.

The trek to get there, however, will be a long one.

Evangel will take on the top two 8-man football teams from Tennessee this season, while the Lightning also have matchups against Grace Baptist from Tennessee, who has previously played 11-man football, while battling traditional in-state foes in the ACSC such as Ezekiel.

ECS will open the season as the first teams to play football in Shelby County with a matchup against Franklin Christian Academy on Friday, Aug. 13.

Franklin won last year’s state championship in Tennessee with an 8-0 record, meaning the Lightning will get a tough test out of the gate on their home field.

The Lightning will then hit the road on Aug. 20 to take on AISA foe Meadowview, who finished last season 0-10, including a 40-6 loss to Evangel in the season opener.

Evangel will return home for three games following that road trip, and will start the home stand with a difficult matchup against Grace Baptist from Tennessee.

The Golden Eagles finished 2-10 last year, but won two of its last three games and competed in the 11-man level. This will mark their first year in 8-man football, which should make the matchup intriguing.

The Lightning will get two in-state 8-man opponents after that with a matchup against North River at home on Sept. 10 and Freedom on the road on Sept. 17.

It will mark the first matchup between ECS and North River since 2015, but the Lightning are 6-0 all-time against the Chargers, winning by a combined 303-50.

Freedom tested Evangel in two games last year, but the Lightning were able to pull off wins of 43-20 and 49-32 and should have similar success this season.

Evangel will then return home on Sept. 24 for an ACSC matchup against Lighthouse, before hitting the road on Oct. 1 for a rivalry battle against Ezekiel.

That two-game stretch marked a difficult one for the Lightning last year, edging out Lighthouse 49-34 before losing to Ezekiel 65-34 a week later.

That, however, motivated Evangel to finish the season with five wins in a row. That should be another important stretch this season, and the Lightning will continue to use last year as motivation.

Following a bye week on Oct. 8, Evangel will hit the road again to take on the Tennessee Heat, who have previously won state championships in Tennessee and even battled for national titles.

Evangel beat the Heat twice last year, winning 67-53 in the regular season and 42-13 in the semifinals of the national tournament. Those two losses for Tennessee marked two of the team’s three on the season.

The Lightning will add one more stop a week later on Oct. 22 against East Central, before returning home to close out the regular season on Oct. 29.

Evangel beat East Central 69-6 last year and will take on Southern Prep for the first time since 2018.

The Lightning will hope to compete in the ACSC state championship on Nov. 5 and then the 8-man national tournament starting on Nov. 12.