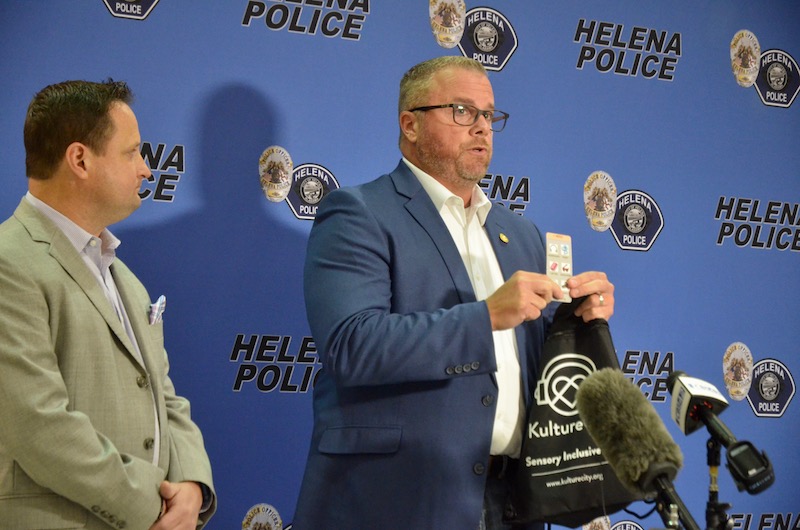 HELENA – The Helena Police Department recently utilized sensory training it received through a partnership with KultureCity to deescalate a volatile situation and save the life of someone experiencing crisis.

KultureCity is a Birmingham-based nonprofit organization dedicated to sensory awareness and inclusion for people with invisible disabilities like Autism or PTSD.

On June 12, HPD responded to a situation where a person appearing to be experiencing a psychiatric episode was in the middle of a highway. Using the training they received from KultureCity, the responding officers were able to deescalate the situation and save the individual from what could have been a fatal incident.

“We responded to a call of an individual in one of our roadways that appeared to be having some kind of a psychiatric issue. The officers immediately identified that this was not caused by alcohol, this was not caused by drugs. He was having some sensory issues, some mental issues,” HPD Chief Brad Flynn explained. “Our officers immediately used their training from KultureCity and were able to communicate and safely deescalate that situation.”

This training has been provided to all 34 of Helena’s officers and over 90 employees throughout the city. Participants learn how to best deal with those who may be experiencing some kind of sensory issues related to autism, PTSD or conditions with similar symptoms.

“It is great training and easily accessible,” Flynn said. “Once they complete it and after they are certified, we issue one of the KultureCity sensory bags,” Flynn said. “Every police vehicle has them and they contain items such as noise-canceling headphones, fidget items like spinners and nonverbal communication cards.”

Those cards can be utilized to help people who are nonverbal to point to how they are feeling or point to things they might need so that officers can help to deescalate a situation and potentially save a life.

KultureCity’s Dr. Julian Maha said Helena was one of the first cities to receive this training. The program was developed after an incident in Salt Lake City, Utah.

“We worked with the city of Salt Lake and trained their fire, police and 911,” Baha said. “More than 9,000 of them were trained. We officially launched with their first responder units about two months ago. It has not only been a success in Helena for preventing negative situations, but in Salt Lake City where we prevented four potential police-related shootings.”

Flynn said Helena is the first city in the United States to have 100-percent sensory-inclusive training, but the department wants to continue to do more to improve its capabilities.

The sensory bags are already in all police vehicles and city hall, and Flynn said the plan was to get them into all public spaces so that more people could be helped through this service.

“An average of one in six individuals have some type of sensory condition, so it is only a matter of time where we will come into contact with them,” Flynn said. “We want to be able to be effectively trained and be able to recognize their needs and accommodate them in a safe way.”

Maha said that other cities have already been contacting KultureCity for this kind of training, and that he would like to refer anyone interested to their website for more information: Kulturecity.org.