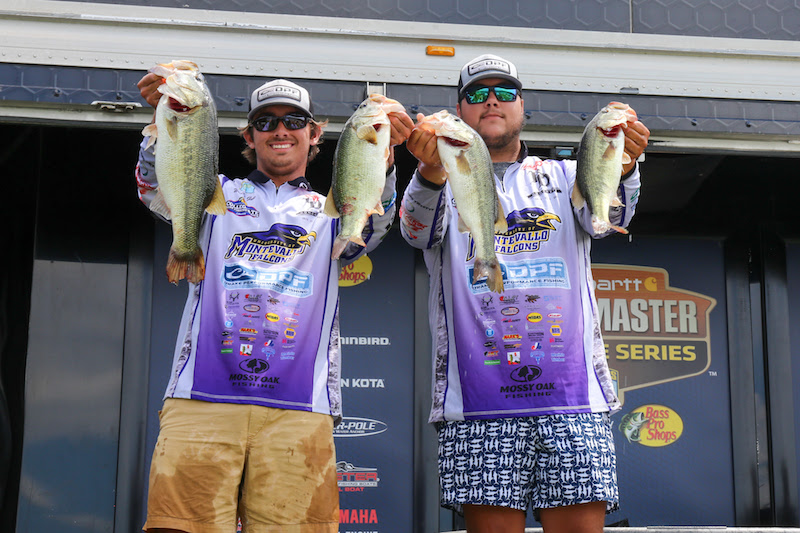 The University of Montevallo took the lead after the first day of the 2021 Bassmaster College Series Wild Card held on Lay Lake. (Contributed)

Despite a long fog delay, the University of Montevallo team of Weston Hollar and Wesley Gore capitalized on what was left of the morning bite and caught five largemouth weighing 17 pounds, 10 ounces to take the day one lead at the Carhartt Bassmaster College Series Wild Card presented by Bass Pro Shops on Lay Lake.

Hollar and Gore hold a 12-ounce lead over their Montevallo teammates Aaron Cherry and Chandler Holt and a 2-pound advantage over Trevor McKinney and Blake Jackson from McKendree University in Illinois.

“To be honest, we didn’t practice really hard,” Hollar said. “We have a lot of experience here and we kind of know what the fish have been doing and figured out the range of fish we were around. We went with it and grinded it out.”

Heavy rainfall from Tropical Storm Claudette drenched much of Alabama over the weekend and water levels on Lay Lake rose as a result. The higher water levels throughout the year have kept the bigger fish shallow, according to Gore, who fishes the system more than half the year.

“It is a river fishery. So, the fish prefer to be shallow, and the mud and current have kept them shallow for a long time,” he said. “I fish here 200 days out of the year. The fish haven’t made it offshore and there are a lot of big ones still shallow.”

With the higher river levels and cooler overnight temperatures, fog settled in overnight and takeoff was delayed more than an hour. Gore said he was worried the morning bite would be over by the time they reached their first spot.

“We thought it was going to hurt us. We were on fish really early in the morning and we ended up running to them and got three good bites as soon as we sat down,” he said. “We grinded it out up shallow, and in the last 30 minutes, we caught two good ones that gave us 17 at the end of the day. We caught all our fish on topwater and we caught one good one flipping.”

The duo mostly targeted largemouth bass rather than spotted bass, fishing isolated patches of grass with topwater and flipping baits, Hollar said. Gore added that they used almost an entire tank of gas running up and down the lake.

“We are trying to catch active fish,” Gore said. “We aren’t trying to sit down and fish an area really thoroughly. The fish we are chasing are bluegill eaters.”

Holding the lead with a spot in the National Championship on the line, Gore said he and Hollar are going all in tomorrow.

“It is either hero or zero,” Gore said. “We are going to get the five biggest bites we can get. It may take all day but we are going to do it. We are going to be Boat 5 in the morning, and I think that will be in our favor.”

Cherry and Holt fished shallow and deep on Day 1 to catch a limit weighing 16-14 and enter the final day in second.

“We had a pretty good day,” Cherry said. “It started off pretty slow. Caught two really early and then went without a bite until 10:30 or 11. We caught our last three really quickly, culled one more time and went prefishing a little bit trying to figure something out for tomorrow. Today we got lucky and had all largemouth.”

Holt said that three of their bigger fish were caught shallow-water before filling their limit in a deeper section of the lake.

“The quality fish aren’t out deep yet,” he added. “The shallow fish are definitely the bigger ones.”

Capitalizing on the shallow morning bite will likely be the key to success for Holt and Cherry, who are hoping they can get the bigger fish to fire before making a move offshore.

“We are going to try to hit as many shallow places as we possibly can in the morning and try and catch as many big ones as possible,” Holt said. “Once that first hour is over, it seems all the bigger fish are starting to slow down. It will be the same strategy, but I think we are going to run to a couple of different spots in the morning.”

McKinney and Jackson’s morning got off to a slow start, but the McKendree duo found a pattern midmorning that helped them fill a 15-11 limit and enter the final day in third place.

“We had one fish at like 9:30,” McKinney said. “We caught our fish in three or four different areas, but mostly doing the same thing. We were fishing shallow and fishing current.”

Both anglers reached the final day of the College Classic Bracket at Lay Lake last season, with McKinney taking the victory and earning the Classic berth. He finished 31st in the Academy Sports + Outdoors Bassmaster Classic presented by Huk at Lake Ray Roberts in Texas earlier this month.

Finding better than average bites has been the key, Jackson said.

“Our practice was fairly good. We found a lot of areas that had fish, but look at how many limits have crossed the stage,” Jackson said. “It is just a matter of getting those two or three big bites.”

Matthew Cummings and Joseph Wood from Bethel University caught a 7-4 largemouth to take the lead in the Carhartt Big Bass of the Tournament standings.

The full field will take off from Beeswax Creek Park at 5:30 a.m. CT Thursday and return at 1:30 p.m. for the weigh-in. The Top 12 teams will punch their ticket to the 2021 Carhartt Bassmaster College Series National Championship presented by Bass Pro Shops at the St. Lawrence River Aug. 12-14.

Calera native serves as a member of U.S. Navy’s…