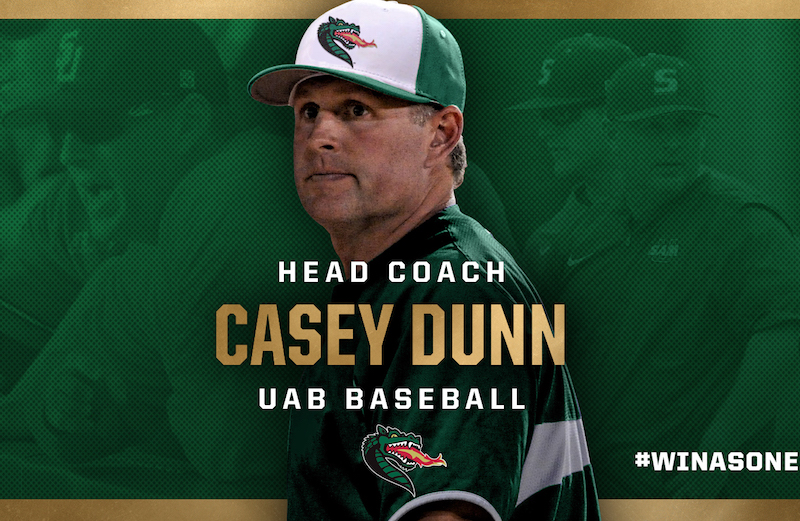 Dunn, who got began his head coaching career by starting Spain Park High School’s program, joins the Blazers after a very successful coaching stint at the helm of the Samford University program for the past 17 seasons. This past season, the Bulldogs made their third NCAA Tournament appearance in program history.

“We are thrilled to welcome Casey Dunn into our UAB family,” Ingram said. “His relationships in Birmingham and around the country, along with his track record of success made him an ideal choice. I am confident that UAB can be a dominant force in baseball if we provide the resources necessary for success. We have plans to invest in our facilities in a way that puts our coaches and student-athletes in a position to win championships.”

Dunn is Samford’s all-time winningest head coach, posting a record of 530-422 (.557). The team has played in the Southern Conference Tournament title game six of the last eight years, winning the title three times, including most recently in 2021.

“I am excited about the opportunity to be the next head baseball coach at UAB,” Dunn said. Samford has and will always hold a special place in my heart. I look forward to the challenge of building a championship team in Conference USA. The vision that Mark has for baseball is one that excites me, and I look forward to working beside him to bring it to reality. To all the former players and supporters, it’s time to get on board and help take UAB to new heights.”

Under Dunn’s guidance, the Bulldogs have posted seven-straight 30+ win seasons, including 13 of the last 15 full seasons overall. Dunn has coached 51 All-Conference student-athletes and four SoCon Freshman of the Year honorees.

The 2019 season saw the program’s first regular-season conference title and tied the program record with 41 wins. Dunn was named the Southern Conference Coach of the Year following that season.

In 2020, the Bulldogs got off to a 13-2 start before the cancelation of the season due to the COVID-19 pandemic.

The Bulldogs’ baseball program saw a program-record seven players selected in 2012 Major League Baseball Draft, with nine players signing with major league teams. During Dunn’s tenure at Samford, the Bulldogs have seen three players drafted in the first round of the MLB Draft.

Prior to Samford, Dunn started the baseball program at Spain Park High School in Hoover. In three years at Spain Park, he posted a record of 53-41. Dunn’s teams also won two Jefferson County titles, a co-region championship and made two state playoff appearances.

Dunn played four seasons at Auburn (1996-99). As a senior, he earned All-American honors as a catcher after batting .379 with a Southeastern Conference-leading 81 RBI.

Dunn graduated from Auburn in 1999 with a degree in social science secondary education. He is married to the former Marty Goldthorp and the couple has a son, Sam, and daughter, Linlee.

Shelby County hopes for similar success from this year’s…