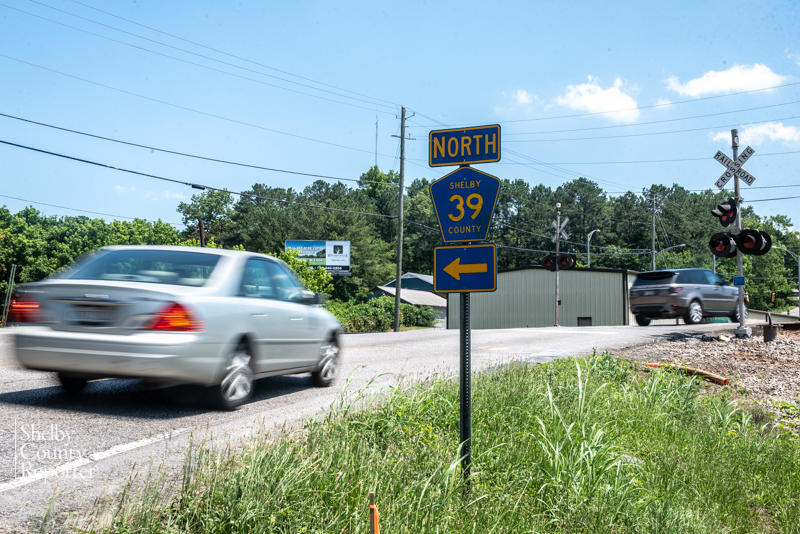 The busy intersection of County Roads 39 and 47 in Chelsea will be upgraded over the next few months with an expected completion date of October. (Reporter photo/Keith McCoy)

CHELSEA – A multi-year infrastructure project along County Roads 39 and 47 is expected to be complete this fall, according to Chelsea city officials.

The realignment of the 39/47 intersection in front of City Hall will be complete by late October, Mayor Tony Picklesimer said.

The goal project, which is a development partnership with the city and Shelby County, is to adjust both roads by straightening 39 and realign 47, which the city in turn hopes will help alleviate congestion in the area due to a railroad crossing also cutting through both roads.

One particular reason for the concern is that there is congestion frequently at the intersection on school days, making it difficult for parents to transport their children to and from school.

“We’re hopeful that this will alleviate that problem, and will be easier for getting kids to school and picking them up in the afternoon,” he said.

In addition to that, 47 is the main road linking Chelsea to Columbiana.

According to Picklesimer, this is a project that the city has been working on for the past several years and has been anxiously waiting on construction to begin.

Now that it is underway, Picklesimer expects the project to go smoothly moving forward, with construction being complete by the end of October.

The magic of connecting