Trucking around: Food trucks see an increase in popularity over the last year

Many restaurant doors closed during the COVID-19 pandemic, but where one door closes another one opens, and in the case of many, that new door was on wheels.

During a period of time where many restaurants could not remain open due to restrictions caused by the pandemic, many families have turned to a new way of serving customers by taking their food to them through food trucks.

While they are not a new concept, the popularity of mobile food services exploded during 2020 due to a number of factors, including brick and mortar restaurants being forced to close due to COVID-19 restrictions.

According to an analysis by the U.S. Bureau of Economic Analysis, Americans get food away from home nearly six times a week—a statistic many restaurant entrepreneurs knew they still needed to capitalize on during the pandemic.

Mobile food truck growth had also been outpacing that of traditional commercial food service, with an estimated 7.5-percent growth rate between 2016-2021, according to a study by IBISWorld.

That same study found that there were more than 26,000 mobile food service operations throughout the country, which is up from an approximate 8,000 a decade ago in 2011.

Though they had seen an impressive growth rate, food trucks were still not a first choice among Americans.

That, however, has changed drastically with trucks making their way to neighborhoods, breweries, hospitals, schools, church events and many other locations each day of the week and sometimes multiple times a day.

Interstellar Ginger Beer Owner Shane Kelly noted that having food trucks has provided a valuable option for his customers that isn’t typically offered by a brewery.

“We do not really have the ability to have a full-time kitchen,” Kelly said. “Having food trucks come and park at the brewery helps attract more customers who might be seeking that out. We usually only have them on special occasions, but I have noticed a difference when we do.”

According to Kelly, having the trucks park there creates a “carnival-like” atmosphere where people can really enjoy themselves. The brewery has events where they will have around 10 trucks in attendance, which has typically been a success.

“Last time we did it, all of the trucks sold out. They were all very happy and plan to come back,” Kelly said. “During these food truck rallies, our bar line is continuously moving, and I could not be happier about that. It is mutually beneficial.”

Even though most restaurants that survived the pandemic have been able to reopen their doors, the prevalence of the food truck industry has maintained its foothold in the minds of people throughout the community.

Helena Chef Joe Sciarrotta began his foray into the industry when he opened his food truck Hey Bebe earlier this year. Sciarrotta said even though he started recently, he is constantly booked and has found great success. 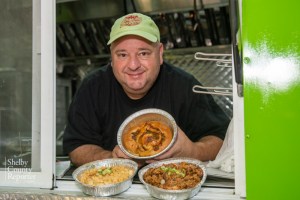 Hey Bebe was able to create a desire around its new endeavor by generating a unique experience for customers and developing relationships with them.

“When you have repeat customers, that is very flattering,” Sciarrotta said. “For me, it is about making money but also about giving a quality product that they can take to their family. We are developing a following. We have had people drive from Chelsea to see me in Pelham because of those relationships.”

While many people are looking to trucks as an alternative for their meals, they are most popular with a younger audience. With that in mind, many operators have chosen to create a landscape that uses innovative ideas to reach certain age groups.

“My secret weapon is text-ordering,” Sciarrotta said. “Most people don’t have the opportunity to do something like that. Imagine you could text me on your way home and literally make our window a drive-thru. I do that all of the time.”

He also said his menu caters to those younger crowds, who have helped the food truck scene take off.

“Younger age groups are always more willing to try a food truck, and older people will always be a little more hesitant,” he said. “My menu is designed to offer things that each group will find familiar and feel comfortable ordering. They also have the chance to try something new, so there is something for everyone.”

One of the biggest questions coming out of this surge is how to maintain the momentum gained over the last year. Sciarrotta said he sticks to a motto: “Inspect what you expect.”

“Anytime I get one of those text orders, I always follow up the next day,” he said. “I want them to know that I care, and it helps me get feedback on how to better myself.”

Chain restaurants have also taken note of the success, which has led to them rolling out their own truck.

Alabama-based chain Milo’s Hamburgers started taking its Burger Bus on the road just a few months before the pandemic.

“We started operating in January last year,” said Marketing Director Mary Duncan. “At that time, we were mostly operating at businesses and public or private events. Once COVID hit, neighborhoods really took on a lot of the business that food trucks had to offer.” 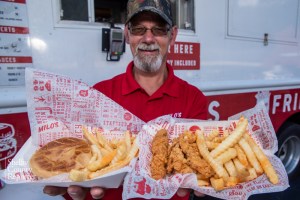 For Milo’s, operating a food truck has the added benefit of testing out new products and new markets that could be home to its next brick and mortar location.

“We launched nuggets earlier this year,” Duncan said. “We basically turned the Burger Bus into the Nug Bus. We did takeovers in different areas where we just passed out nuggets for free. We set up at churches, breweries and other places. That really paid off because we were able to determine if it was feasible to offer them in our stores, and we were.”

The Burger Bus can be just as busy as a store front for the restaurant chain. Duncan explained they usually have around eight employees running the show and go to seven events each week. To be sustainable, the bus has a target to meet at each stop.

“Ideally, to be profitable we would need to serve a little over 200 people if we are in a test market, or 100 for a business or private event,” Duncan explained. “To make it worthwhile, we usually need to bring in at least $1,500 per service.”

While there is a focus on those who switched or adapted their operations to the food truck model, it is also important to note the inspiration that many aspiring restaurateurs are adapting to this model instead of trying to open a brick and mortar location.

During the pandemic, Pelham resident George Gilliam discovered a love of cooking and baking. Like many, Gilliam began experimenting with different recipes while quarantining and found a love of pizza through the challenge of learning the process of creating the perfect pie.

Gilliam said that inspired him to venture out and start Uncle G’s Pizza, his own Detroit-style pizza truck.

“I have always had an entrepreneurial spirit. Getting to the point where I was selling pizza was always my goal early on while I was trying to learn how to do it,” Gilliam said. “I just kind of fell in love with the challenge of making pizza and then it turned into something bigger. I started working on it and made some really bad pizzas, and I just kept going and challenging myself.”

Uncle G’s Pizza debuted, without planning, on National Food Truck day on June 25, using lessons he had observed throughout the pandemic to adapt a unique model, even for food trucks.

“The whole concept is Detroit-style pizza, which no one is really doing in the Birmingham-metro area,” Gilliam explained. “To match that, we are also doing a more non-traditional service model as well. Everything is on preorder at the moment. They go to my online platform and pick a time-slot, and I have them set up in half-hour increments. On the day of their order, they will come to whatever central location I’m set up at and pickup their orders.” 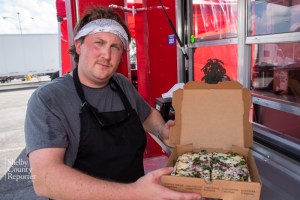 While most trucks are either made-to-order, or prepared ahead of time, Gilliam believes that not only adapting to the new food service landscape, but using technological advancements such as an ordering app will be the spark to a new-generation of food service.

While food is in the title, many trucks have begun to emerge offering other favorites. Now, you don’t even have to drive to your nearest coffee shop. There are often trucks offering a daily caffeine-fix in neighborhoods, businesses and parking lots.

A popular example of this trend is Beignets and Lattes, based at a brick and mortar location in Helena.

When the store opened in 2019, Owner Nathan O’Connor said the team there had always planned on having a second location. However, when the pandemic began they realized that a food truck might be a better option.

This actually ended up being a profitable move for the team, according to O’Connor, who said he was able to get the operation up and running quickly without the costs associated with opening a new location.

Not long after starting its mobile service, the company has become a popular staple at events, especially those held in the mornings. O’Connor said that this recognition has been great and allowed them to think outside of the box when it comes to service.

“The days are more fast-paced than the store, and it can get really crazy sometimes,” O’Connor said. “But, it has been very rewarding. The reception has also been pretty good so far. Everyone is enjoying it and allowing us to spread the word.”

As food trucks continue to roll out, there are currently 67 with registered health scores in Shelby County, making mobile food service in the area a popular venture.