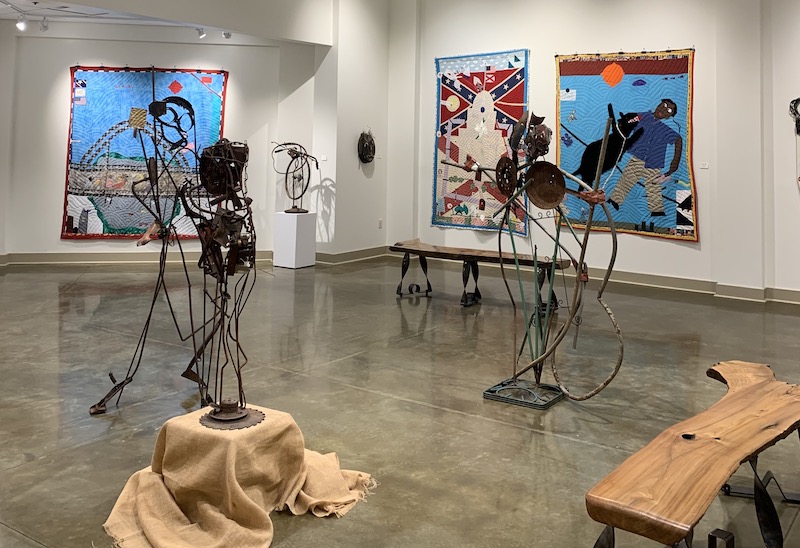 The story quilts of Yvonne Wells and the found materials sculptures of Charlie Lucas are powerful works of art and history. They can be viewed through July 22 at the EBSCO Fine Art Gallery at the SCAC building in Columbiana. (Contributed)

The EBSCO Fine Arts Gallery, housed in the Shelby County Arts building in Columbiana, is currently showing a powerful exhibit by artists Yvonne Wells and Charlie Lucas. Both Wells and Lucas are self-taught, African American folk artists who use found materials to not only create art, but to tell stories about their lived perspectives of faith, and living through changes brought on by the Civil Rights movement.

Paul Barrett, the curator of the exhibit, paired these two artists together for this show because aesthetically, both have created works that have so much to say through the stories they tell, but juxtaposed together, the impact of those stories is expanded.

Both artists began creating their art in the 1980s for different reasons. Wells, in her eighties and from Tuscaloosa, worked in education through the turmoil of desegregation during which she earned a Master’s degree in physical education. She began making “story” quilts in the ’80s and has been the recipient of many awards for her work. As you walk through the exhibit, you can see so much of the struggle for racial equality in Alabama as well as other events in her life. Each quilt not only shows her perspective through each stitch, but it also pays homage to her faith. The daughter of a minister, you can find a tribute to the trinity in each piece of art she’s made.

Lucas, who grew up in a rich family history of art as well as craft, put the skills he’d learned as a boy from family members, to work as art, after a work accident that changed the course of his life. A sculptor, Lucas welds and creates with all sorts of found items. His work too, is to tell the story of his life and perspective of the world he experienced. He lives in Selma and hosts camps for kids in the area that are interested in creating.

“Alabama has the richest history of self-taught artists in the union,” Barrett said. He explained that both of these artists, as well as others he has worked with, have displayed their work all over the country and even overseas, yet often, for these creators, “familiarity ends up breeding contempt in some ways. They are accomplished artists, but often don’t get the recognition they get in other places here at home in Alabama.”

Barrett, as an accomplished curator, recognizes that bringing this level and kind of art to smaller towns across the state celebrates not only the art, but the communities hosting them as well.

“These artists have all this fantastic talent that came from a desire to tell a story using what they had at hand. Hopefully it will inspire people to be creative, to celebrate tradition, and move them toward inspiration of their own,” Barrett said.

The “What I Knew How to Do” exhibit can be viewed Monday through Thursdays from 10 a.m. to 5 p.m. (Wednesdays starting at 11 a.m.) through July 22. The visit is free and more information about it can be found at the Shelby County Arts Council website at Shelbycountyartscouncil.com.