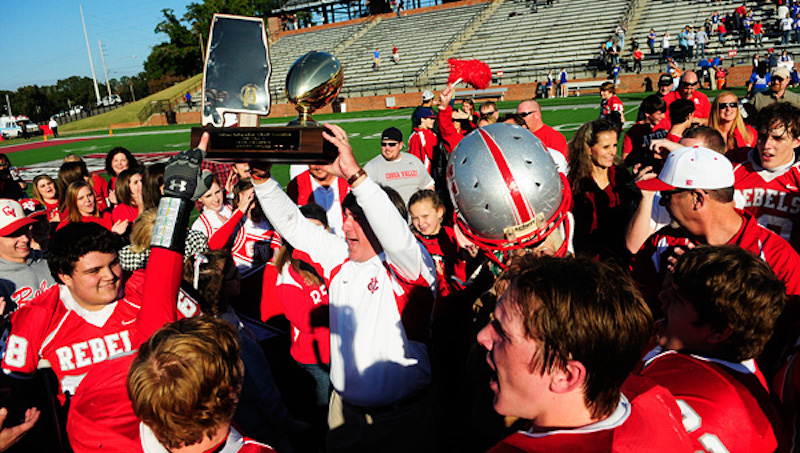 HARPERSVILLE – Coosa Valley Academy has turned to a familiar face with state championship experience to lead its football program heading into the 2021 season.

The school recently hired Vince DiLorenzo, who coached in the state for 26 years before moving to Georgia.

One of his three coaching stops during his career in Alabama included two years as a head coach of the Rebels between 2009 and 2010, leading them to their only state championship in school history in 2010.

DiLorenzo led the Rebels to an 11-2 record that season and a 35-20 win against Sumter Academy in the state championship game. Now, he’s back and ready to build the program back to a state championship contender after going a combined 23-77 since he left, including a record of 9-57 since 2014.

So when he showed interest in coming “home,” Coosa Valley Headmaster Pam Lovelady knew he was the right man for the job.

“I always kept Coosa Valley in the back of my mind,” DiLorenzo said. “I felt I owed it to Mrs. Lovelady to come back. The more I talked with her, the more I felt I needed to come back and show gratitude to her and this school for saving me.”

He also won two Class 5A State Championships at Gadsden and made it to the semifinals of the playoffs two other times, while also going on to lead Spain Park to its first playoff appearance in 2003 and first playoff win in 2004.

DiLorenzo then retired and started looking for private school jobs, but couldn’t find anybody interested, which made him start second guessing his skillset as a coach.

“It got to late June, and I remember still searching for a job,” he said. “That’s when I heard about this job. I called coach (Stephen) Mackin and talked to him about the opening.”

DiLorenzo was honest in saying he didn’t know if it was going to be the right fit as he pulled into the school for the first time.

“I got here and drove down the drive and saw a K-12 school the size of a football field. Keep in mind, I had just left Spain Park,” he said. “My first thought was I didn’t know if I could do it.”

But it turned out to become one of the biggest blessings in his life.

That’s when Mackin decided to enter the military, leaving the job open heading into the 2009 season.

Lovelady knew immediately she wanted to give DiLorenzo a shot at being the next head coach, and he didn’t disappoint.

Just like he had done everywhere else, DiLorenzo stepped in and led the Rebels to an 8-4 record in year one and a playoff win. Then, a year later, he helped the team produce an 11-2 record en route to the 2010 AISA-A State Championship.

“Everything just aligned that year to help us win the championship,” he said. “We had the talent and kids who wanted to work hard.”

After that season, DiLorenzo got the head coaching job at Woodland High School in Cartersville, Georgia and spent the next 10 years coaching out of the state.

He knew, however, that he didn’t want to get stuck in a rut, so the move back to Coosa Valley became an obvious one.

Now, he’s hopeful he can lead the Rebels back to prominence in the AISA, which always has its challenges due to the inconsistent rise and decline in student numbers.

“It will be a challenge,” Dilorenzo said. “This is a school that was in 8-man football two years ago. It’s a tough storm to weather in the AISA, and a lot of our success will boil down to numbers, talent and luck.”

DiLorenzo said he didn’t take the job because he had anything to prove, but because he has an intense desire to be successful and help the student-athletes grow.

“I want to continue making a difference in the kids’ lives, the lives of the parents and continue to be a contributor to the staff,” he said. “Those are the most important aspects of the job.”

The Rebels haven’t won a game since Oct. 19, 2018, going a combined 0-14 the previous two years, but DiLorenzo is building his staff and getting a feel for his players so he can help turn those losses into wins.

He said it may take the rest of the summer to get everything where it needs to be, but he feels confident in himself and his players to help rebuild Coosa Valley’s program.