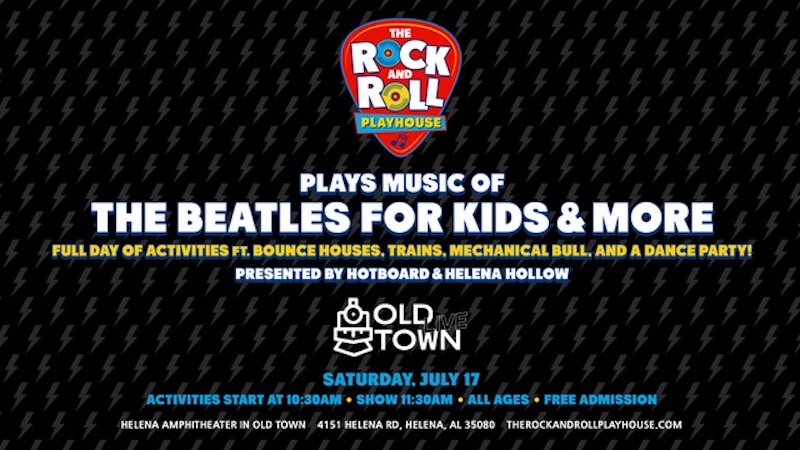 Rock and Roll Playhouse is set to entertain kids with the sounds of The Beatles during the third Old Town Live concert event on July 17. (Contributed)

HELENA – The Helena Old Town Board (HOTboard) will host its third concert event on July 17 featuring Rock and Roll Playhouse.

This concert is designed for a core audience of families with children aged ten and under.

Rock and Roll Playhouse is a family-friendly band combining classic rock music with interactive games, movement and stories to appeal to a younger audience.

For this show, the band will be performing songs from The Beatles starting at 11:30 a.m. at the Helena Amphitheater.

“Founded in 2013 in New York City, the Rock & Roll Playhouse has expanded to over thirty venues and cities across the United States. The Playhouse shows follow a similar format for activities that pair with the music, including a hello song followed by a rock and roll jump, rainbow streamers, a giant parachute and other activities such as call and response songs and freeze dance,” according to a press release from the HOTboard.

The HOTboard has planned more fun after the concert. There will be a kid’s zone featuring bounce houses, slides, the Helena Hollow “train” ride, game activities and a live DJ.

Old Town’s restaurants will be out at the event offering dining for people of all ages. Adults will also have an opportunity to try different alcoholic beverages and take them to-go with a special entertainment district branded cup.

Since its inception, the HOTboard has been looking at different ways to cater to specific audiences. Since Helena has a lot of young families, its members decided this would be a great way to engage the community.

“This Old Town Live event will be outstanding due to the focus on children and the family. Old Town will be filled with joy, laughter and excitement. We are excited to see what is possible,” HOTboard member Brian Hayes said.

Sponsors for the event include Helena Hollow, Old Town’s merchants, the Helena Business Association and the city of Helena.

The event is free to attend and more information can be found on the Helena Old Town Facebook page.