Briarwood faces another difficult slate of games in 2021 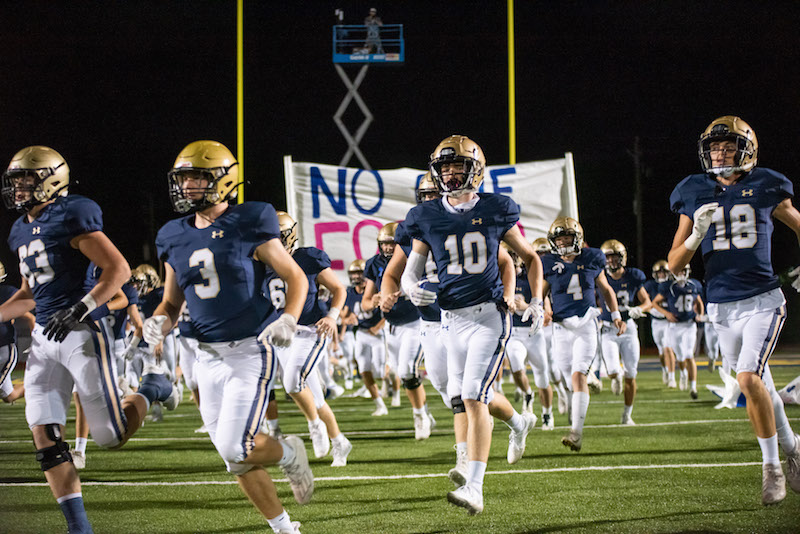 The Briarwood Lions will look to follow last year's success with another strong season in 2021, but the Lions will battle against one of the more difficult schedules in the state. (File)

It’s safe to say the transition to Class 6A was a smooth one for the Briarwood Lions during the 2020 football season despite obstacles such as COVID-19 and a challenging schedule.

The Lions were able to put together a 7-2 regular season and earn a spot in the second round of the playoffs after a big 31-17 win against Hartselle in the first round.

The season came to an end in a 35-12 loss against a top-five Oxford team in the second round, but Briarwood’s 8-3 record against one of the toughest 6A schedules in the state was one of the more impressive storylines of the season.

Now, they are a year wiser in the 6A classification and seem ready to tackle similar challenges on this year’s schedule.

There won’t be any easing into the schedule either with three difficult matchups right out of the gate.

Briarwood will open the season on Friday, Aug. 20 with a home game against Madison Academy.

Though the two teams are separated by two classifications with Madison Academy in Class 4A, the two teams have met four times and have split each of the matchups.

The Mustangs are also coming off a solid 2020 season that saw them go 9-0 in the regular season before then punching a ticket to the second round of the playoffs. They fell to Northside 28-21 in the second round, but finished the season 10-1 overall and will enter this season confident.

It will give the Lions a good chance, however, to gain some confidence with what should be a potent offense, while the defense will have a chance to get experience for young players looking to fill big shoes.

Briarwood will need that week to fine tune any leftover learning curves from the summer with a matchup against Spain Park looming on the road a week later.

Last year, the Lions challenged Spain Park after taking a 14-0 lead, but the Jags answered back with 21-unanswered to pull off a comeback win.

This year, Briarwood will have more experience back offensively, meaning they should be able to make plays late in the game to have a chance yet again, but the defense will have to be ready for a new look from the Jags this season.

That will lead into the region opener against rival Chelsea on Friday, Sept. 3.

Briarwood holds a 23-9-1 record against the Hornets and has won the last four games in a row, one of which was a forfeited win they received in in 2019 following a 17-14 loss.

This year, however, should be interesting with both teams returning the majority of their talent on offense and losing several key defenders. Whichever one claims a victory will get an early leg up in region play.

Briarwood will then hit the road for back-to-back region games the next two weeks for matchups against Woodlawn on Sept. 10 and Huffman on Sept. 17.

The Lions beat Woodlawn 43-0 last year and followed that with an impressive 28-16 win against Huffman.

That will be a key two-week stretch if Briarwood hopes to start 3-0 in region play for the second year in a row, which could make the Lions a front runner for a region championship.

Following those two road games, the Lions will return home for two straight against Mortimer Jordan on Sept. 24 and Shades Valley on Oct. 1.

The first of those two games against the Blue Devils will mark a break from region play. The two teams have met four times on the field with Briarwood winning all four matchups, while last year’s game was forfeited by Mortimer Jordan due to COVID-19.

A week later, Briarwood will jump back into region play against Shades Valley.

Last season, the Lions picked up a 42-19 win in that game, matching their best offensive performance of the season in the first-ever meeting between the two teams.

Then, on Oct. 8, Briarwood will square off with Mountain Brook on the road in what has become a quick rivalry battle in Class 6A.

Mountain Brook ended up edging out the Lions in a 17-7 game last year and holds a 2-1 series lead with last year’s matchup marking the first since 1993.

Like last year, that game should play a major role in determining the region champion.

Following a bye week, Briarwood will close region play on Oct. 22 with a home matchup against Homewood.

The Lions won last year’s battle 28-6 to earn the two seed in the region and should be motivated once again with it marking the final home game this year.

The regular season will come to an end a week later against 5A Corner on Oct. 29.

Briarwood won last year’s game 42-7 and hopes to see similar success this year ahead of a potential playoff matchup one week later.