Calera set for 6 home games on this year’s schedule 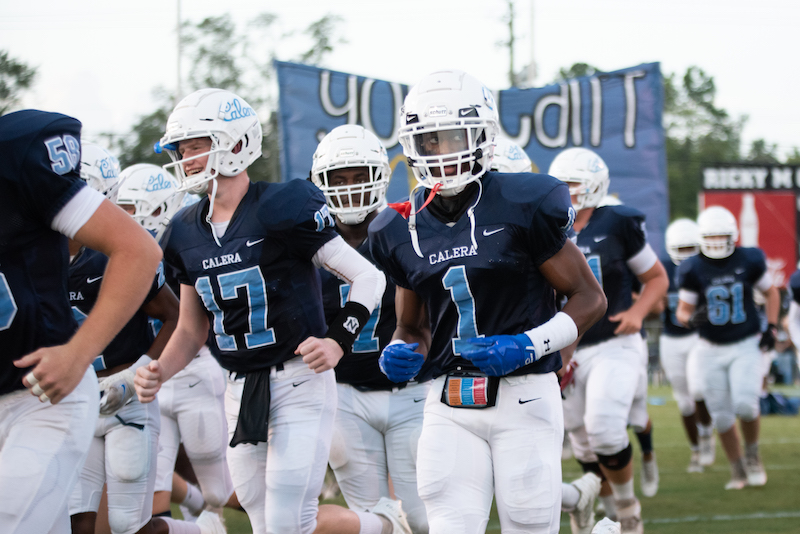 The Calera Eagles will face difficult obstacles on this year’s schedule, but hope to overcome them under first-year head coach Jason Hamlin. (File)

It will be a new era for Calera football when the Eagles take the field for the 2021 football season thanks to the hire of new head coach Jason Hamlin.

Hamlin will step in for Trey Simpson, who spent the last two seasons leading the Eagles and starting the process of turning the program around.

In 2018 and 2019, the Eagles won one game each season in their first two years in the 6A classification; but last year, they were able to finish 3-7 overall.

While two of those wins were forfeit wins against Jackson-Olin and Pell City, Calera did grab a head-to-head win against Chilton County by a final of 24-21. In addition to that, four of the team’s seven losses were by eight points or less against solid teams.

That was a massive step in the right direction, and is something the Eagles will hope to continue under Hamlin with some of the area’s best athletes waiting to be developed.

That said, they will have several young players and will still lack depth at some positions, but the athleticism and finding a way to come together as a team could make up for that with an exciting new coaching staff.

The schedule won’t do them any favors, but early success could translate into opportunities down the road for a possible push to the playoffs.

The good news for the Eagles is they’ll get six home games this season, including three in a row to end the season, which could come in handy should they be battling for a spot in the postseason.

The challenging schedule will kick off on Friday, Aug. 20 with a home game against Demopolis.

Demopolis always presents a tough test as a 5A title contender every year and will be coming off an 11-1 season last year with the only loss to Faith Academy in the second round of the playoffs.

The Eagles will then hit the road for the first time on Aug. 27 when they travel to Jackson-Olin.

The Mustangs forfeited last year’s matchup, but will mark another tough matchup early in the season.

Calera will then kick off region play against county foe Pelham on Sept. 3 in a rematch of what was a tight finish last year.

The Eagles came back and had a chance to tie late, but ultimately lost 49-41 a season ago.

Pelham will be the more experienced team this year, but Calera will be gaining experience at that point and should have several athletes ready to prove they can hang with the Panthers once again.

Calera will return home a week later on Sept. 10 for a battle with Chilton County. Last year, the Eagles’ only head-to-head win came against the Tigers in a 24-21 win.

They’ll look for similar success this year to start region play 1-1 at the worst heading into a bye week.

Following the bye week, Calera will host Pell City in a non-region game on Sept. 24. It marks a matchup the Eagles won due to forfeit from the Panthers last year, which should make it intriguing this year as they square off on the field.

The game should provide good insight to where the Eagles are midway through the season. A win would be big for confidence heading into a tough slate to end region play, while a loss will send them into four consecutive region games searching for confidence.

Coming out of that matchup, the Eagles will take on Helena in a Thursday night matchup on Oct. 7 for their final road game of the season.

The Huskies won last year’s matchup 14-13 and are 4-1 all-time against the Eagles. But if last year’s game is any sign of what to expect this year, it should be a tight battle for two teams hoping to punch a ticket to the playoffs.

Calera will then end the regular season with three consecutive home games, including back-to-back region games against Wetumpka on Oct. 15 and Benjamin Russell on Oct. 22.

Finding a way to have the defense in a better position at that point in the season could be the determining factor in whether or not the Eagles can grab a playoff spot.

Calera will then end the regular season at home on Oct. 29 with a matchup against county foe Chelsea.

The Eagles actually lead the all-time series 20-12, but they have lost three in a row and nine of the last 10, including a 31-14 loss last year.

A non-region game, this year’s matchup likely won’t play any role in a playoff spot, but it’s one Calera needs to compete in to show the program is continuing to turn the corner.

Briarwood faces another difficult slate of games in 2021