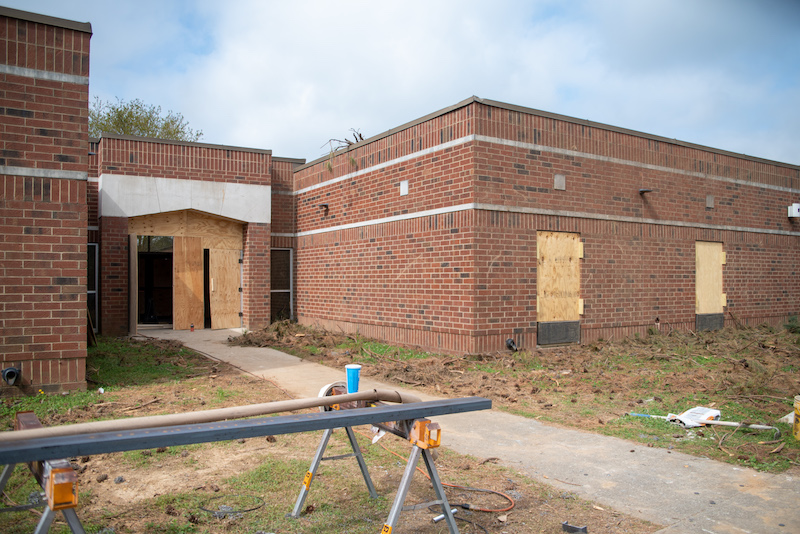 Oak Mountain Middle was one of the hardest hit schools by the March tornado. (File)

COLUMBIANA —  Shelby County Schools has begun final repairs at two of the school district’s facilities that were damaged during recent tornadoes, including a middle school and football stadium.

The Board of Education approved construction bids for the repairs during its monthly meeting on June 22, and repairs are now currently underway and expected to go through the summer. David Calhoun, the school district’s assistant superintendent of operation, is currently overseeing the construction projects, and said that the school district is making great progress on the repairs.

“We’ve had very good luck so far and have made fantastic progress at this point in time in the summer. Summers are generally the time that we will do any replacement of flooring or ceiling tiles as well as do any painting,” he said. “For kids, it is a slow down time because they go home, but in the world of school maintenance and operation, that’s really when things ramp up.”

The most pressing repairs pertain to the Oak Mountain High School Football Stadium at Heardmont Park, which suffered extensive damage due to an EF3 tornado on March 25 of this year.

The biggest restorations consist of roof replacements on several structures, including the football stadium’s press box, dressing room and concession stand. During the storm’s immediate aftermath, Calhoun said the state initially allowed the Shelby County Schools to forgo the repair bidding process in order to address any severe damage as well as restore vital facility functions.

“At the time, the state allowed us to go ahead and move expeditiously and make necessary repairs to prevent further damage, but they did not allow us to do a total makeover so we only addressed the things that needed immediate attention,” he said.

The total cost of stadium’s repairs are estimated at $96,000, according to the repair cost bid and will be conducted by the Birmingham-based David Acton Building Corporation.

Calhoun said the company was selected due to having a prior relationship with the school district, and that the company was previously contracted to renovate Pelham High School’s cafeteria when the school was still associated with Shelby County Schools.

At this point in the repair process, however, Calhoun said the school district is focused on returning facilities to peak operation by the fall school semester.

The school district is also using this time to make additional repairs to previous tornado damage that occurred at Chelsea Middle School.

Most notably among these repairs includes restorations to the gymnasium at the school, which suffered extensive water damage following a roof breach during the October storm.

Calhoun said the school district’s priority has been sealing the gymnasium’s roof in order to accommodate the school’s basketball season, which will resume in the fall.

“Obviously the roof was repaired right away, and if we really got involved with repairing the floor, that would have interfered with the middle school team’s being able to play,” he said. “Since the floor damage was not on the playing surface itself, we felt like it could wait, and so that’s what we did. That’s why we’re coming to this now.”

According to Calhoun, the water damage is located in the interior block wall of the building, near the gymnasium’s sideline and bleachers.

The construction bid has the project’s costs estimated at $46,000, with part of those expenses dedicated to the realignment of several buildings at Montevallo Middle School following the school’s foundation shifting in May.