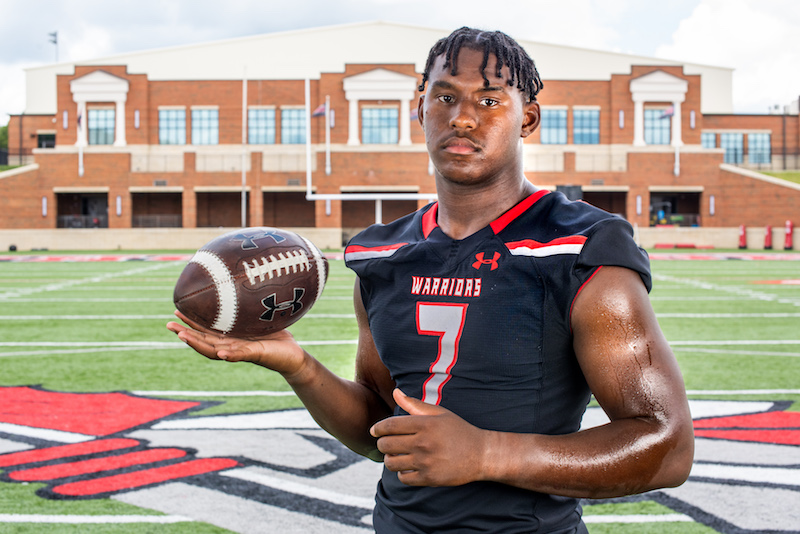 Thompson senior linebacker Jeremiah Alexander, the state's top recruit for the class of 2022, has committed to Alabama. (Reporter photo/Keith McCoy)

ALABASTER – The state’s top high school football prospect and the reigning county player of the year has announced his collegiate decision.

Choosing between Alabama, Clemson and a handful of others, Thompson linebacker Jeremiah Alexander has decided to play college football for the Alabama Crimson Tide and head coach Nick Saban.

Alexander originally committed to Alabama on Monday, March 9, 2020, but decommitted from the Crimson Tide a few months later on Tuesday, Oct. 20.

However, he did so to focus on his run to a state championship with the Warriors, while also keeping his options open. He admittedly kept the Tide at the top of his list and remained in constant contact with Saban.

“It’s so close to home and the atmosphere there is amazing. It just feels right,” he said after his original commitment. “I would always watch them and Nick Saban. Dont’a Hightower and others were guys I looked up to. There was a lot that went into that process, but the home atmosphere was key.”

That sentiment seemed to hold true despite opening his options at the end of last season.

Alexander, who visited Georgia, Clemson, UCF and others this summer in addition to Alabama, made the announcement in an Instagram post with the caption “cribbb,” alongside an elephant emoji.

Alexander is not only the state’s top prospect for the Class of 2022, but is considered a five-start by 247sports and the nation’s 16th best overall prospect.

A starter since his freshman year, the linebacker for the Warriors has helped lead the team to back-to-back state championships and three championship appearances in a row.

He has also been one of the most dangerous at getting into the backfield as a hybrid defensive end/linebacker who has racked up a combined 70 tackles for loss and 23 sacks in three seasons.

Alexander also has 298 tackles in that span and will be coming off a junior season that saw him shift from an end position back to a linebacker position.

Despite having to read more and drop into coverage at times, he remained one of the most dangerous defensive threats in the country.

He willed his way to 29 tackles for loss, eight sacks and 105 total tackles, with defensive lines having no answer for possibly the most physical player in the state.

Now standing close to 6-foot-2, 235 pounds, he is as quick and strong as he has been the last four years and will anchor a Thompson defense full of top recruits, including players such as Tony Mitchell and Peter Woods who are part of next year’s class.

Alexander will hope to lead Thompson, who is ranked fifth nationally heading into the season, to a third consecutive state championship this season.