White left behind a 104-year legacy

It’s a rare thing for a community to have one of its best members live to see more than a century of change, but that is what the small town of Shelby was blessed to see in the man of Mr. Charles White. White, who passed from this earth on June 29, lived to tell of all he’d seen for a total of 104 years, and his gentle and humble presence in his community lives on in the children he raised who have themselves gone on to spread love and hope for generations. 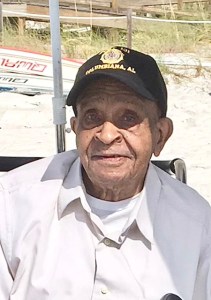 Mr. White was our last link to so many memories in the Shelby area. When I sat down to chat with him just before his birthday in 2019, I was fascinated by the stories he shared with me from the days he helped his mother who worked at the historic Shelby Inn, which he ultimately outlived when it burned down earlier that same year.

White shared with his grandson Maurice Whiting how he was part of history when he delivered mattresses to those in need during the Great Depression through FDR’s New Deal.

In 1943, he saw major changes in the military when he was among the first Black men drafted into the U.S. Navy. He served as a machine operator based in Corpus Christi, Texas until 1945.

Upon coming back home to Shelby after the war, White went to work for Vulcan materials in the ore mines, from which he eventually retired. Early on during his career he met the love of his life, Willie Love White, the woman who became his wife upon their marriage in 1948. They were married for an incredible 69 years when she preceded him in death in 2017.

Mr. White’s children and grandchildren lovingly called him Big Daddy and they describe a man who’s life set a remarkable example of what it was to be a leader. Daughter Tracy Sanders earnestly remembered, “Big Daddy lived a life that stressed the importance of being a loving husband and father to all of us. He was a man of character and he loved his queen.”

Daughter Teresa Whiting’s most prominent memories of her father involved his love of knowledge. “I remember daddy getting up and being dressed before everyone else on Sunday mornings. By the time we were up he was outside on the porch reading his Bible.” She and her other siblings went on to speak of his love of the news and educational shows. “It’s important to know what’s going on in the world, ” is a phrase even his grandchildren often heard as a reminder to keep learning.

Me. White was a pillar of his church, Providence Baptist, where he served as chairman of the board of deacons for years. The friendships he made there were lifelong friendships that he and his wife built a strong community with. In 2017, they were inducted into the Alabama Senior Citizens Hall of Fame for their 69-year marriage, and he for being a centenarian.

“When I came into the family, ” says son-in-law Leslie Whiting. “He welcomed me as a kind gentleman. I never saw him make anyone feel bad about themselves. He was always a gentleman in every situation and over the years he taught me how to be a husband and family man.”

Mr. White was a man who loved a good cigar. He always had a natural remedy to offer. His work ethic was legendary. He made flapjacks that no one could beat. He offered a safe place for kids all over the community to come and hang out at. All of these things and so much more than can be counted in this short telling of a life that spanned more than a century, and touched countless lives made up the personality of a character larger than life in this small community. Mr. Charles White, you sir, will be missed.