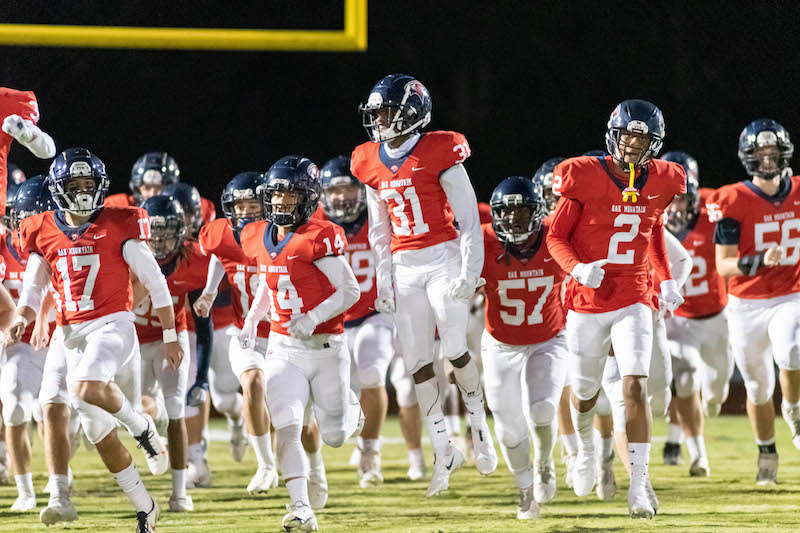 The Oak Mountain Eagles will look to build off a quarterfinal playoff run last year against some of the best teams in the state this season. (File)

Oak Mountain is headed in a new direction under head coach Tyler Crane. What direction is that? Only time will tell for the Eagles, who have been an option-style team for the last several years.

Crane, however, is putting a fresh spin on the program and is ready for the challenges ahead on a difficult schedule.

Entering his first year as a head coach, he’ll take over a team with talent back on both sides of the ball and gets a group of players who led the Eagles to the quarterfinals of the playoffs last year and within a few yards of advancing to the semifinals.

And despite one of the more challenging schedules in the state, the Eagles made school history with their first-ever 4-0 start and began the season 6-1.

They lost three in a row to close the regular season with a difficult stretch of games, but went on to win 41-28 in the opening round of the playoffs against Austin before falling 24-21 to Hoover in a controversial quarterfinal game.

This year, the schedule won’t do them any favors, meaning the Eagles will have to capitalize on any opportunities.

The season will begin with back-to-back road games against county opponents, starting with the traditional rivalry matchup against Chelsea on Aug. 20.

Oak Mountain has won eight of the nine matchups between the two teams, including the last four years in a row.

The Eagles have done so with strong defense, giving up a combined 21 points in that span, including a combined two points the previous two years.

It will be a Crane’s first game, and likely a style change offensively, while Chelsea also returns a lot of talent on the offensive side, which could lead to a more back-and-forth battle to open the season this year.

Oak Mountain will then travel to Pelham on Aug. 27 for another difficult test against a Panthers’ team that won last year’s Class 6A, Region 3 championship and returns a large portion of talent on both sides of the ball.

The Eagles squeaked out last year’s game after overcoming a deficit by outscoring Pelham 21-7 in the second half for a 28-21 win. With both teams returning some of their best players, this year’s game should be just as entertaining the week before region play.

Oak Mountain’s region opener will happen at home on Sept. 3 when the Eagles welcome Gadsden City to Heardmont Park.

The game ended up being surprisingly close last year with the Eagles holding off the Titans for a 38-23 win and a 3-0 start. With this year’s game marking the first home game and the region opener, they’ll likely be motivated in an early must-win game with more difficult matchups down the line.

A week later on Sept. 10, Oak Mountain will hit the road again for a battle of first-year head coaches.

The Eagles will look to build off a 35-28 win last year that made the difference in them earning the fourth-and-final playoff spot from the region, while Vestavia Hills will look for redemption under Sean Calhoun, who replaces Buddy Anderson after 43 years.

That will lead to an intriguing matchup with Hoover back at home on Sept. 17.

Oak Mountain lost to the Bucs 42-7 in the regular season last year, but almost took them down in the quarterfinals of the Class 7A playoffs.

The Eagles came up a foot shy of a first down deep inside Hoover territory that would have given them a strong chance to win. Now, they’ll be looking to use that as motivation heading into this year’s battle with what will likely be a top-five team.

Oak Mountain will get a bye week after that before hitting the road on Oct. 1 to take on rival Spain Park.

The Eagles beat the Jaguars 48-17 last year to improve to 5-1 overall and will hope for similar fortune this year.

Spain Park has held the upper hand in the series, but Oak Mountain will have confidence after last year and also has the more experienced team back this season.

That will begin a key two-week stretch for the Eagles, who will then return home for a matchup with Tuscaloosa County on Oct. 8.

Another winnable game, Oak Mountain beat the Wildcats 42-21 last year and knows how important that matchup will be with what looms the next two weeks.

On Oct. 15, the Eagles will hit the road to take on Class 7A favorite Thompson, before then coming home to take on Hewitt-Trussville on Oct. 22 to end region play.

Both teams were in the top three of the 7A standings a season ago and will be top contenders for the championship this season.

Thompson returns one of the best teams in the country after winning the last two titles, and will enter this year’s game with the Eagles off a 49-21win last year.

Hewitt actually beat that by two points with a 51-21 win against Oak Mountain a season ago.

Those two games, along with the Hoover battle, will be the toughest on the schedule, showing how important other toss-up games are to earn a spot in the playoffs.

If the Eagles want a shot at upsetting either of those top teams, the defense will have to show improvement after giving up a combined 100 points last year.

It won’t get any easier the final week when Oak Mountain closes the regular season with a home game against Clay-Chalkville on Thursday, Oct. 28.

The Eagles lost last year’s matchup 21-14 after failing to convert on several offensive opportunities. The Cougars went on to advance to the quarterfinals of the 6A playoffs, and will continue to be a talented group this year.

Should Oak Mountain make it through that gauntlet and earn a playoff spot, the Eagles will be as prepared as any team going into the postseason.

Spain Park looking to flip the script with this…