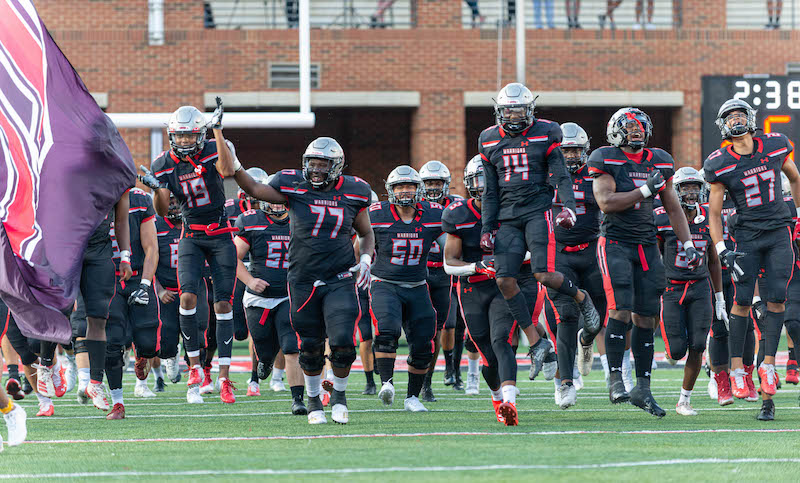 The Thompson Warriors will look to finish undefeated for the second year in a row against one of the most difficult schedules in the state this season. (File)

One question on the minds of many heading into the 2021 season is can the Thompson Warriors do it again?

Last year’s success stood out in a run of successful seasons for the Warriors after finishing 14-0 with an incredible state title win in the final seconds to repeat as champs.

The coaching staff is trying to keep the focus on one game at a time, while the players are as confident as ever with one of the most talented rosters in the country, but the question of can it happen again comes with the territory of becoming the state’s top dog.

Winning one state championship is rare enough, winning back-to-back is even more rare and winning three in a row is almost unheard of.

Throw in the mix of looking to finish undefeated for a second year in a row adds even more to the remarkable run.

However, in order to not only win the state championship again but also finish undefeated, head coach Mark Freeman knows the only option is to take it one week at a time with the best teams in the state on their schedule.

Entering the season as winners of 18 in a row and 26 of their last 27 games, the Warriors will take on a schedule that features three teams who had 11 or more wins last year, four who had nine or more and five who had seven or more.

In addition to that, they’ll square off against six teams who went to the playoffs last year and five who made it to at least the quarterfinals of the postseason.

It will all get under way on Friday, Aug. 20, when Thompson opens its path to a three-peat with a road trip to take on the Oxford Yellow Jackets.

Oxford will be under new head coach Sam Adams, who previously led Hillcrest-Tuscaloosa for seven years with five seasons of eight or more wins.

Adams will take over an Oxford team who won the state championship two years ago and finished last year 11-2 with the two losses coming to Thompson 56-34 in the opener and Pinson Valley 34-2 in the quarterfinals.

The Warriors will return the majority of last year’s team and have a classification advantage, while the Yellow Jackets will be replacing some key players.

That said, Oxford scored the second most points of any team against the Warriors last year and will hope catching them early helps them again.

Thompson will then come home for the first time in a final tune-up for region play when Sparkman comes to town on Aug. 27. The Warriors won the first-ever meeting between the two last year by a final of 39-7, while the Senators responded with six wins in their final eight games to earn a playoff spot.

The Warriors should once again have the upper hand to gain confidence heading into a region opener against Tuscaloosa County the next week.

Thompson will have to hit the road for the second time in the first three weeks to take on the Wildcats in the first region game, but it marks a game THS won 49-7 last year.

Tuscaloosa County is expected to be improved this year, but it’s tough to see the Wildcats being 42 points better, while the Warriors should be even better.

Thompson will then return home for back-to-back region games Sept. 10 and Sept. 17.

The Warriors will start with a matchup against Spain Park. Last year, that marked the closest battle for Thompson aside from the state championship game.

The Jaguars had a chance late to tie the game inside the 5-yard line, but a turnover ended their chances as Thompson went on to close out a 48-35 win.

Spain Park will be replacing a large portion of the talent from last year’s team, but the rivalry between the two should be alive and well.

Then comes the battle with Hewitt-Trussville, which has become a game of national prominence in recent years. The game has been televised twice on the ESPN family of networks in the last three seasons with Thompson winning both matchups.

The Huskies, however, were the only team to beat the Warriors in 2019, showing they aren’t scared of the challenge with plenty of talent themselves.

Last year, however, Thompson won 35-21 in the regular season and then 42-16 in the postseason to give them wins in four of the last five matchups between the two.

The Warriors will then get a break from region play, but they’ll still get a firm test when they travel to Mountain Brook on Sept. 24.

The Spartans are coming off a trip to the Class 6A semifinals a season ago where they lost to eventual state champion Pinson Valley. They also held Thompson to its lowest point total of the season last year aside from Auburn in the state championship game, giving up only 31 points to a team who averaged 43.1.

Mountain Brook will likely challenge Thompson with defense once again, but scoring could be an issue after last year’s shutout.

Thompson will remain on the road on Oct. 1 with a trip up the road to Vestavia Hills.

The Rebels will be under first-year head coach Sean Calhoun after Buddy Anderson retired following more than 40 years as the team’s head coach.

Vestavia normally marks another difficult defensive team to face for a potent Thompson offense, but Calhoun’s background is on the offensive side of the football, which could lead to some fireworks between two great offensive minds midway through region play.

The Warriors will then return home to take on Gadsden City Oct. 8 and Oak Mountain Oct. 15.

Gadsden City has won no more than three games since 2017, which should make the showdown with the Warriors a difficult matchup for the Titans.

Oak Mountain, however, will be under new head coach Tyler Crane, who will revamp the team’s look. The Eagles, who are coming off a trip to the quarterfinals of the playoffs last year, will return four-year starter Evan Smith at quarterback, while the defense will be deeper than it has been.

Then comes the showdown of the season on Oct. 22 when Thompson travels to take on the Hoover Buccaneers.

A matchup that has decided the region champion and a trip to the state championship each of the last four years, both teams know what a win in this game likely means.

Thompson had never beaten Hoover going into the 2017 season, but the Warriors have now won five in a row and six of the last eight in the series.