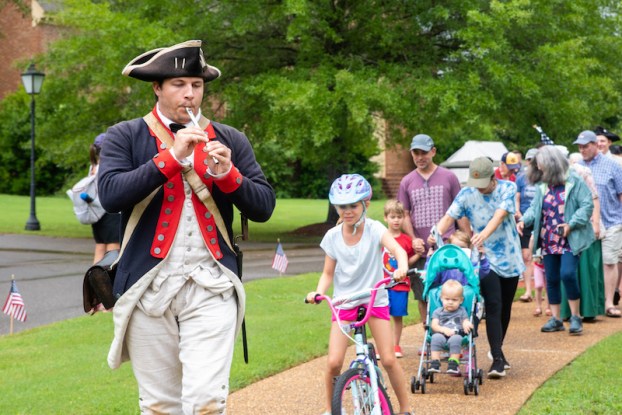 Children ride their tricycles and bicycles in the American Village’s patriotic parade on Friday, July 2. The weekly parade is a part of the venue’s Red, White and Blue Days this month. (Reporter Photo/Keith McCoy)

MONTEVALLO – Independence Day celebrations took place across the county earlier this month, but the American Village is not finished hosting patriotic activities for the summer.

In addition, a children’s parade is held every Friday morning.

“The idea for the children’s parade came from our founder and president, Tom Walker,” Poole said. “You do not have to dress up or bring anything to participate in the patriotic parade, but it sure is fun to wear red, white and blue, and decorate your bike, wagon or scooter for the parade.”

The parade begins in front of the National Veterans Shrine at 11 a.m.

“Our costumed historical interpreters join in the fun, and the parade is led by a piper singing and playing ‘Yankee Doodle Dandy,’” Poole said. “Guests may also stroll the grounds, visit the Randall Museum of miniature American history, see our replica Concord Bridge, experience the National Veterans Shrine and meet patriots of the past. Bring a picnic lunch and spend the day with us.”

Admission is $5. Veterans, active military members and children age 4 and under are free.

“Our summer program has been very well received. It is a good mix of both indoor and outdoor activities, and vignettes for all age groups,” Poole said. “We plan to have a summer season program again next year, even bigger and better.”