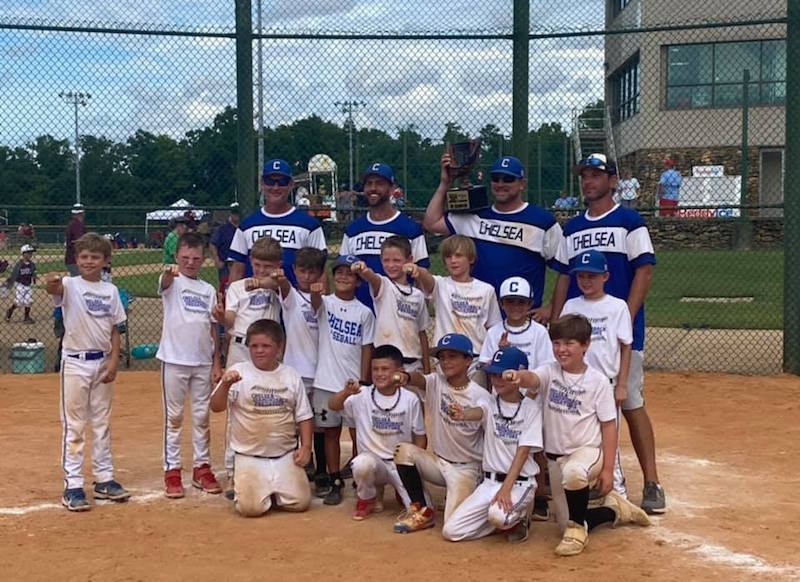 MONTGOMERY – Despite several close calls in games that could have gone either way, the Chelsea 9U baseball team earned a World Series title on Friday, July 9.

Known as the Chelsea Bronze Hornets, their clutch play was on display throughout the entirety of the two-day tournament.

After going 1-1 in pool play, the Hornets bounced back by winning three consecutive games by two runs or less to claim the title.

All three teams competing in the Tournament of Champions from across the state split their pool-play games with Chelsea beating Northport 7-6 and losing to Wetumpka 10-6. Northport then beat Wetumpka 14-3.

But when it came time to compete for the championship in double-elimination format, Chelsea didn’t flinch.

In game one on Friday, July 9, the Hornets kicked the day off with a game ag 9 a.m. against Wetumpka. This time around, Chelsea got redemption by scoring two more runs and giving up four less in an 8-6 victory to remain in the winner’s bracket.

That set up a matchup with Northport, who got a bye in the opening round.

The Hornets felt confident entering the matchup after their pool-play win, and once again, they pulled off a clutch one-run win by a final of 6-5 to advance to the championship game.

Wetumpka then took down Northport 13-2 in the loser’s bracket game to earn another chance at Chelsea in the championship.

With the two teams having split their first two matchups, the third would decide who would take home the title, and once again, it went down to the wire.

Chelsea, however, had already won three games by two runs or less and remained calm in big moments to pick up another two-run win, claiming the championship by a final score of 7-5.

The Hornets finished the tournament 4-1 between pool play and elimination play, winning their final four games in a row after losing 10-6 to Wetumpka in the first pool-play game.