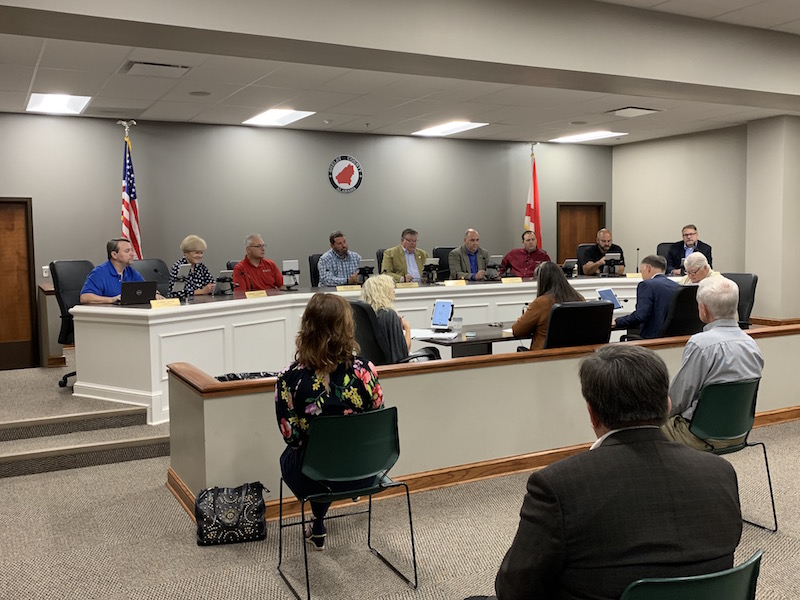 The Shelby County Commission on July 12 approved a bid for the installation of a traffic signal at a busy Alabaster intersection and a budget amendment for capital projects to be completed with American Rescue Plan Act funds. (Reporter Photo/Emily Sparacino)

COLUMBIANA – The Shelby County Commission took action on several significant items on its July 12 meeting agenda, including a traffic signal construction bid and a budget amendment for capital projects to be paid for with American Rescue Plan Act funds.

The Commission voted to award a bid of $152,157 to Stone and Sons Electrical for the installation of a traffic signal at the intersection of Shelby County 17 and Shelby County 26, also known as Kent Dairy Road, in Alabaster.

“This will be a very positive thing,” District 4 Commissioner Ward Williams said of the project.

In addition, the Commission voted to award a bid for road sign and traffic safety material to the only responsive bidder, Vulcan Sign, and acknowledged pricing varies by sign size and messaging as detailed in the bid documents.

The Commission also approved to revise the Fiscal Year 2021 operating budget to reflect the county’s use of roughly $21 million in funding from the Coronavirus State and Local Recovery Fund, established under the American Rescue Plan Act, on two infrastructure projects.

“The County Commission and staff have identified opportunities for significant long-term capital improvements in the areas of water services infrastructure to the Shelby County water system and its wholesale and residential users and emergency response communication system infrastructure that directly improves emergency response communication to serve all residents of Shelby County and the region,” the resolution reads in part.

County Manager Chad Scroggins said the county received the first half of ARP funding in May and wanted to utilize it for projects with a long-lasting impact.

The water services project calls for improvements to and expansion of a ductile iron water line on Shelby County 280 from U.S. 280 near the Narrows down to Shelby County 280 to Harpersville U.S. 280, totaling $9,400,000.

The communication system project will improve the P25 radio system infrastructure covering all 808 square miles of the county by increasing the number of channels for call volume and expanding the coverage area by eliminating holes in coverage in Pelham, Alabaster, the west side of the county and the east side in Dunnavant and Vandiver.

The system will utilize simulcasting to free up frequencies for neighboring counties, and Shelby County will own two of the three new towers without adding new lease obligations.

“Everybody in this county will benefit from this, plus the adjoining counties because we’re able to give back some frequencies,” Scroggins said.

Pelham City Manager Gretchen DiFante and Shelby County Sheriff John Samaniego thanked Scroggins and the Commission for seeing the value in the communication system project for the safety of residents and first responders.

“For us to be able to, as a county, come together and say we’re going to have some synergy in our communications, when you do move to this, I applaud you,” DiFante said. “Thank you very much for considering this.”