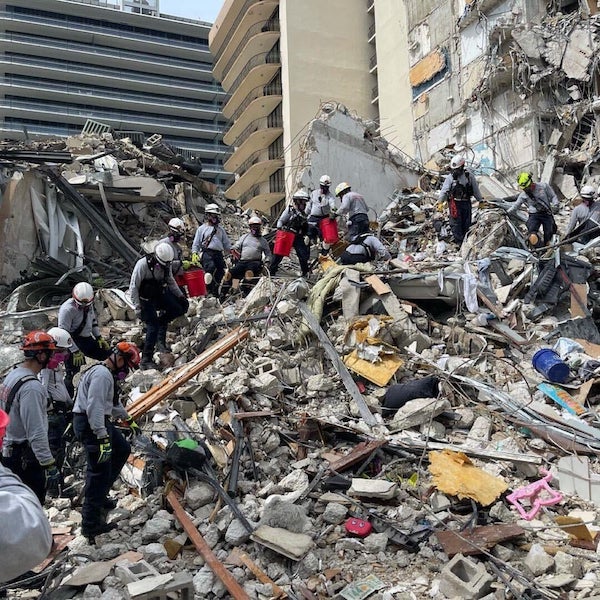 PELHAM – The city of Surfside, Florida has received much attention after the collapse of a condo building on June 24 left at least 95 people dead, 11 people injured and 22 still missing.

First responders have been diligently working in the city to make sure everyone is accounted for at the end of the day.

As can be expected, those first responders have been subject to things that many people would hope to never see. In an effort address their mental health, firefighters from the Pelham and Hoover Fire Departments went to Surfside to lend peer support.

This support involves lending a familiar ear to those working the scene so they don’t have to carry that trauma with them.

“With the peer support we are firefighters, first responders and medics that can talk to others and they are more apt to open up to us,” PFD Firefighter Jim Terrell said. “They can unlive some of these experiences and get them off their chests. We have therapists that are trauma-related specialists that can start out on their level and meet them where they are at. We have our own level of normal, and our therapists we have chosen can start there with them.”

The team was comprised of members from the Professional Firefighters of Alabama, who have been training in the area of peer support through a partnership with the Alabama Fire College and the International Association of Firefighters.

Terrell explained their trip to Surfside was not to act as first responder, but to provide peer support to those already down there working.

“They were digging in the rubble and just doing their jobs. We were going down to shadow a peer support team the IAFF already had in place,” Terrell said. “We ended up only shadowing them for an hour because we jumped right into being active. We broke up and talked to a lot of first responders that were there and let them talk and get things out.”

The job of those acting as peer support is to be a familiar face in a sea of devastation. Responders are well-equipped to deal with tragic situations, but sometimes having someone relatable to talk to can make a huge impact on their mental health.

“Everyone deals with it differently,” Terrell said. “There were folks there that worked 9/11 and the earthquakes in Haiti. For some it was just another Tuesday and for others it was different. They had our guys to lean on if they needed it. That is what peer support is all about. We are firefighters that understand.”

Terrell said the issue was close to his heart and he wants to use this program to address the growing problem of suicide among first responders.

“I have been a firefighter for 36 years and we see a lot. We try not to dwell on things, but that is the old school way of coping,” Terrell said. “With the peer support program, we are trying to change that. Suicide rates among first responders in the country has been higher than the line-of-duty deaths. PTSD is a real problem.”

He added his own personal experience: “I’ve got my ghosts. I’ve turned them into friendly ghosts and can deal with it. My family had to suffer through me being not so nice, but thank God they stuck with me. It really does help me to do this, to be able to help others. As first responders we are here to do that. “

While they were faced with devastation, there was a silver lining earned from the trip to Surfside. Terrell said this experience would help PFD be able to respond to situations as they arise back home in Alabama.

“We went to shadow the IAFF team to bring back those skills to the state for the next big disaster–and there will be one,” he explained. “It is going to happen and anything we can do to better the response is what we are after. The Fire College has been very gracious and they helped us get down to Miami, and we are bringing it back for our program.”

Addressing mental health was once considered a taboo subject, but Terrell said things like peer support will help to open up new discussions and hopefully create a culture of awareness.

“Things are going the right way,” he said. “It will take some time, but we will effectively change the culture to look out for each other’s mental health.”