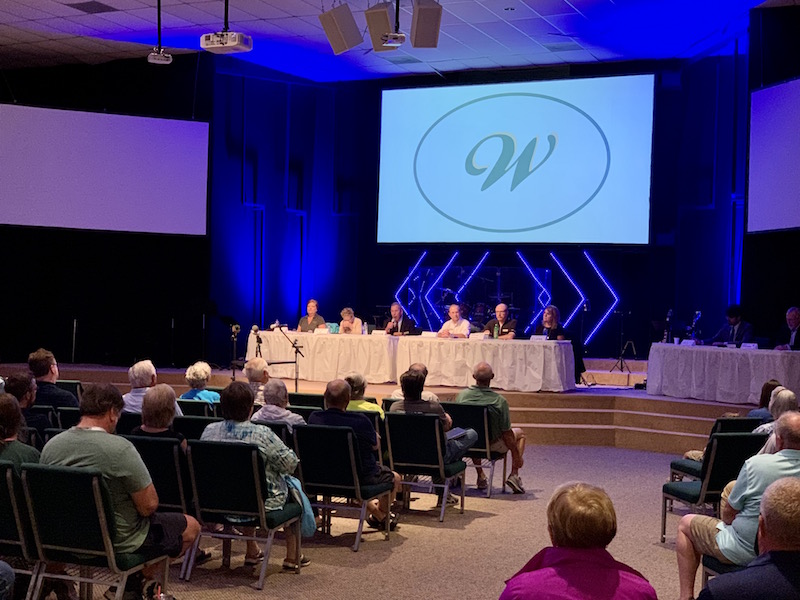 The Westover City Council held a special called meeting on July 13 to give residents an opportunity to share input regarding the city of Chelsea’s consideration of forming its own school system. (Reporter Photo/Emily Sparacino)

More than a dozen residents shared questions and comments on how Westover could be affected if Chelsea separates from Shelby County Schools and forms an independent city school system in the future.

City Council members listened to all of the speakers and wrote down their questions to address after the public hearing closed.

Westover’s meeting comes nearly a month after the Chelsea City Council voted to hire Criterion K12 Consulting LLC to perform a feasibility study on the possible formation of a city school system.

“The process for taking on a school system for Chelsea, if that were to happen, will be that they will first look at their feasibility study,” Westover Mayor Larry Riggins said. “They will then decide on whether to vote on whether or not they will proceed. It will take a vote of the people of the city of Chelsea to approve the taxes to support a school system.”

A significant component of the discussion is the potential for communities such as Westover, Highland Lakes, Dunnavant Valley and Mt Laurel to be annexed into Chelsea if the city moves forward with a school system.

Residents’ questions and comments about the proposed school system and annexation related to property tax increases; public safety funding; redistricting concerns, including whether students with special needs would still be able to attend Linda Nolen Learning Center; changing from county to city services if annexation occurs; and the timeline for the entire process if Chelsea decides to move forward with the school system formation.

Calhoun said a final decision has not been made about school reassignment in the event Westover is not annexed into Chelsea.

“If you listened to the city of Chelsea leadership, the mayor’s announcement a month ago, he said in the event that they push forward after the feasibility study, he said the earliest they would be looking to separate and form a city school system would be July of 2023,” he said. “That’s two whole school years from now. This is going to be a process over a period of time.”

Calhoun said any decision made about Shelby County Schools zoning or school reassignment would be disclosed to the parents of students in those areas, and the information would be posted on the school system’s website.

Riggins addressed one speaker’s mention of a possible school site in the Pine Mountain Preserve development, an Eddleman farm lot community under construction off U.S. 280.

“There are four school sites in the Pine Mountain Preserve project that have been designated, if the county so desires, to use for expansion of the current county schools where our children go now,” Riggins said. “That certainly would be available to the county anytime they feel like they can justify doing that. It’s going to all be dependent on how this feasibility study comes in and what amounts of money are going to be necessary for Chelsea to break off and take on their own school system.”

Regarding funding, Mayor Tony Picklesimer said previously that Chelsea’s school system’s initial revenue would come in the form of an ad valorem tax or property tax, which residents would vote for or against at the appropriate time.

The results of the feasibility study will be ready and made public in October, according to Chelsea officials.

Picklesimer said any annexations would have to be decided by a vote of the particular area’s residents.

“A lot of people are very adamant and very convicted (that) Westover incorporated in 2001 so it would not be swallowed up by Chelsea, and that Westover would maintain its own identity,” Riggins said. “Thanks to all of our support from our citizens, Westover is in much better financial condition to even think about opposition to this than we were four or five years ago. We need to get facts in people’s hands so that everybody can make an educated decision and stop believing everything that you see on social media.”

Riggins said he appreciated residents’ input, and he and other city leaders would do their best to address all questions as more information becomes available.

“I know that everybody has a deep conviction one way or the other, and it is our job to get these questions answered,” Riggins said. “There will not be anything done until that feasibility study comes in, in October, and the Chelsea Council makes their decision on how to move forward.”