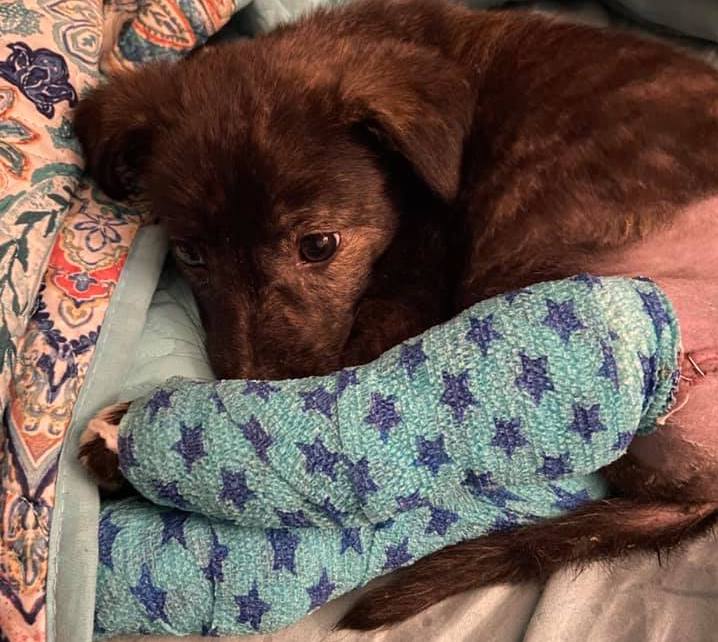 Ryder, a 6-week-old puppy, recovers at his new home in Calera after being thrown out of a vehicle. (Contributed)

Most of us have seen someone toss something out of a moving car—paper trash, food remnants, chewing gum, the dregs of a drink—or we have done it ourselves. But what we don’t expect to see is an animal thrown out of a vehicle.

That’s the horrifying sight a home health care nurse in Randolph County witnessed as she was driving down the road. When she realized the object thrown out of the vehicle in front of her was a puppy, she pulled over immediately.

She then called a woman named Tonya Thornton, who runs an animal rescue in Randolph County, and Thornton’s friend Lauriann Loveless with Loveless Animal Rescue in Calera offered to help.

The 6-week-old puppy had three broken bones in his back legs and was covered in road rash and fleas. He was visibly struggling and undoubtedly in a great deal of pain.

Loveless created a Facebook fundraiser to allow people to donate directly to Calera Animal Hospital, where Dr. Rhonda Ellison was treating little Ryder for his injuries.

Ryder started showing signs of progress shortly after his surgery, eating and drinking well and putting on weight.

A family who heard about Ryder through the fundraiser requested to adopt him and give him a loving home.

Ryder’s traumatic story has a favorable ending, but the same cannot be said for other animals subjected to similar circumstances.

It’s hard to fathom how a person could throw an animal out of a car. I’m sure the nurse in Randolph County will not be able to erase the memory of seeing what happened to Ryder, and that seems unfair.

Instead of trying to figure out why it happened, however, we can focus on the positives that came out of the situation: the willingness of the nurse, Thornton, Loveless and Ellison to facilitate Ryder’s rescue and treatment; the overwhelming response from the community to donate to his treatment fund; and his recovery and adoption.

I hope this never happens again, but if it or something else does, I have no doubt our community will show up in a big way, just like it did for Ryder. He survived because of the good in people, and we can take comfort in that as we cheer for Ryder in his ongoing recovery.