Riding for a reason 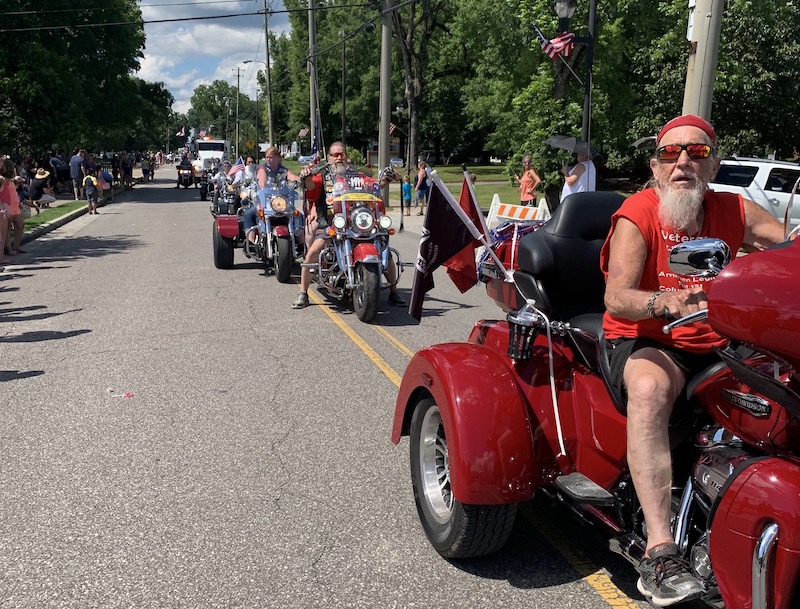 Members of the American Legion Riders, led by Veteran Tom Barnes, showed up and showed out in Columbiana’s Liberty Day Parade. They also participated in the festivities by manning a booth to recruit and support the local community. (Contributed)

The Columbiana American Legion has several branches that comprise Post 131. The American Legion Riders are Legion members that ride motorcycles and use them to bring attention to needs in the community in various ways. Lately, they’ve been very busy.

The Riders’ biggest project and ongoing commitment are to the vets that live at Cedar Ridge Veterans Facility in Clanton. The members of the club have a standing monthly appointment to serve dinner to and visit with the vets that live in this home, many of which have no living family to meet their needs. They bring birthday cakes for those celebrating each month and have provided the residents with toiletry needs and new pajamas at Christmas.

Later this month, VJ’s Bar and Grill of Shelby will be sponsoring a cookout for the vets of Cedar Ridge thanks to one of the Riders’ newest members, Jonathan England. England is also one of the first members of the Sons of American Legion that has become the most recent service branch of Post 131 to organize.

“Going to Cedar Ridge every month really is one of the highlights of our month. There aren’t many of the old fellas left anymore and it’s a special thing to spend time with these veterans,” chaplain and Legionnaire of the Year, Tom Barnes said.

But that’s not all they’ve been up to. In just the last few weeks, they have participated in parades in Columbiana and in Chilton County. The pay-to-ride participation in Chilton County’s parade help to refill the scholarship funds they just used to reward local students with for the first time during this last graduation season.

The Riders also recently had the honor of escorting the body of 105-year-old veteran, Mr. Charles White. Mr. White had been an honorary member of the Legion since 2019, when post 131 learned about their local brother in arms and was among the first Black men to serve in the Navy.

“It was truly an honor for us to perform the ride with Mr. White,” Barnes said.

They have performed countless smaller services to vets over the last year too. From providing flags for Eagle Scout projects, rescuing vets who have broken down on the highway, to making sure that vets have a ride to their doctors’ appointments, the men and women of the local branches of the chapter step up to make these things happen.

“We exist first for the vets, but also for the communities they served as well,” Barnes explained.

The Riders have dreams and plans for further involvement within the Columbiana area that they serve. For instance, they will be assisting their neighboring posts in Calera and Alabaster with ticket taking at American Legion Youth Baseball events, a program they hope to bring to Columbiana in the near future.