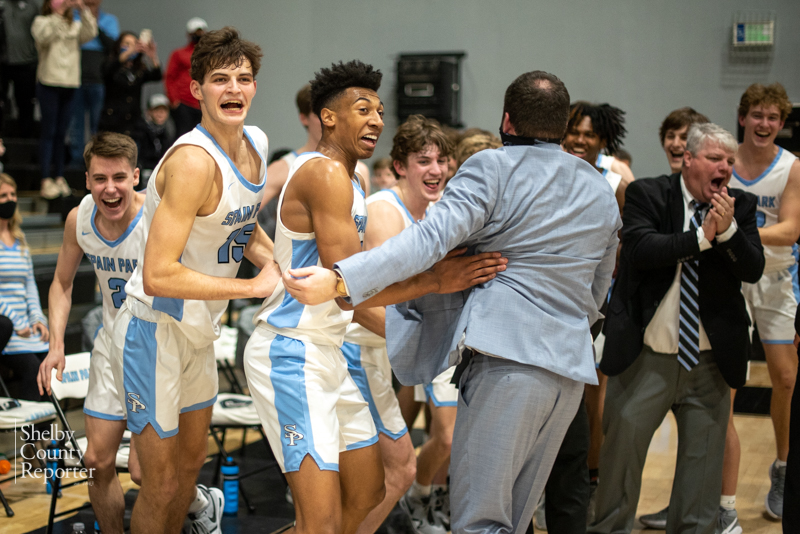 Tyler Blackwell celebrates with Spain Park players after earning a trip to the Elite Eight this past season. (Reporter photo/Keith McCoy)

MONTEVALLO – In a tight Sweet-16 battle with Sparkman, Spain Park assistant coach Tyler Blackwell noticed a trend throughout the game that would go on to make a difference in the final score.

In the final minutes, up by two, head coach Chris Laatsch listened to his advice of what play to run coming out of a timeout. Cam Crawford, the team’s star senior, proceeded to take the ball out. He quickly passed it in, then sprinted right by his defender for an easy dunk that cemented a win and a berth in the Elite Eight for the second year in a row.

Blackwell noticed how far up the defenders were playing on the inbound passes throughout and how there was no help defense going into the paint, which led to him drawing up the game-changing play.

Those are the kind of moments Montevallo High School basketball fans can now expect after Blackwell was recently named the next head coach of the Bulldogs following several years as an assistant under Laatsch at both Helena and Spain Park.

“I’m very excited, very honored and humbled to get this opportunity, especially when you have a place like Montevallo who has a very rich history in basketball,” Blackwell said. “I’m looking forward to getting the opportunity to be their head coach. I’m just eager to meet the guys and get in there now.” 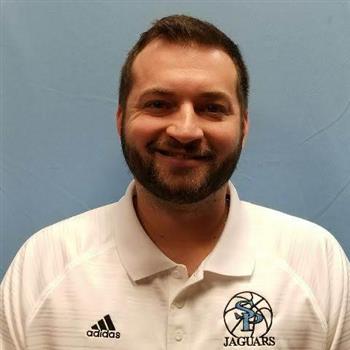 Blackwell is a graduate of Pleasant Grove High School where he played both baseball and basketball. He then went on to play college baseball at Huntingdon College before graduating and jumping into coaching.

After working his way up to becoming one of the top assistants in the state at a young age, he is now getting his first opportunity as a head coach thanks to everything falling into place.

“It’s something me and my wife have been talking about. It’s always been a goal of mine to be a head coach,” Blackwell said. “Talking with my wife and family, I knew this was the right fit. There were a lot of pieces that just fit for us to say this is the right job. We’re already part of the community, so it’s something that made sense.”

He also was friends with Montevallo’s former head baseball coach Chris Shelton, who is now at McAdory, and new baseball coach Josh Bennefield, who spent time at Huntingdon as well. That, along with knowing Montevallo principal Steve Bromley from their time together at Helena, made for the perfect mixture of people who have seen what he can do.

Blackwell knew between those connections and the community, Montevallo was the perfect place for him to start as a head coach.

“How much this community takes pride in their athletics is what makes me most excited. I’ve seen what has been done by coach Boren and the football team in one year and how much excitement that has created,” he said. “I think seeing what they are building as far as excitement goes athletically is what makes this a desirable job.”

He also said he thinks he has what it takes because of Laatsch, who has been a long-time coach in the county at Briarwood, Helena and Spain Park.

“It’s hard to put into words what all he means to me in the basketball realm of things and even outside of that. I talk with him a couple times a day whether it’s about basketball or other things going on,” Blackwell said. “When I had to let him know I was leaving, we both reminisced about our relationship and how we had no clue what it would form into over the years. I consider myself very lucky to call him a friend and to learn from him.”

Blackwell has been part of two schools with Laatsch, helping take Helena to the Sweet 16 for the first time before both moved to Spain Park to lead the Jaguars to the Elite Eight the last two seasons and the Final Four this past season.

“I’ve sat back and just watched what he’s able to do and now I’m hoping to do some similar things, especially building the relationship with these kids in Montevallo both on the court and off the court,” he said.

As he turns his attention to Montevallo and turning the Bulldogs into a contender for the Final Four, he knows what a powerful area he is in for sports and the possibilities that lie ahead.

“It’s going to take some time getting to know some of the guys, but I think we can have success at Montevallo,” he said. “We consider teams to be successful by being locked and loaded and pulling them in the right direction. If they’re all pulling in the right direction, which is to be successful, then that’s what we consider a good year. The goal is to get the team culture down, then wins will pretty much take care of themselves.”

Blackwell will take over a team that hovered around .500 last year, but has several talented athletes set to return this season.

He said he can’t wait to get to know the players and design a style of play that suits them best when the Bulldogs hit the court for the 2021-2022 season.