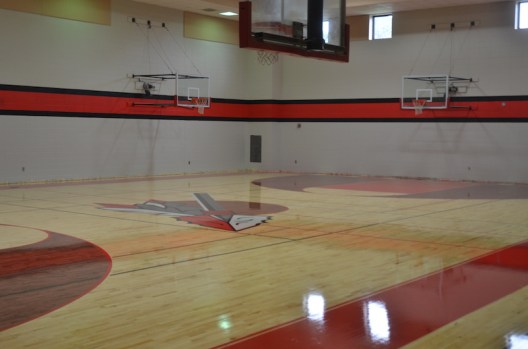 Alabaster City Schools is completing $5 million in improvements to its schools, through the use of state bond issue and bond refinance money. The improvements include two new roofs, new flooring, color scheme updates and facility improvements. (Reporter Photos/Nathan Howell) 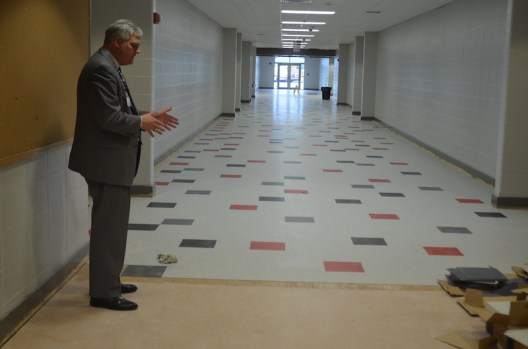 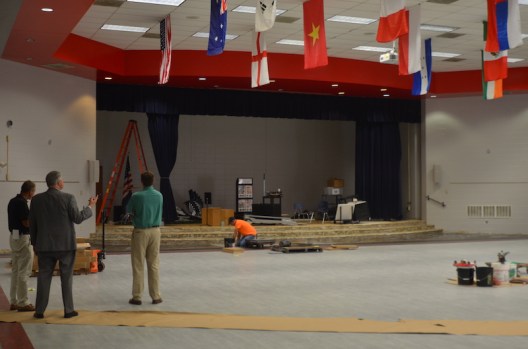 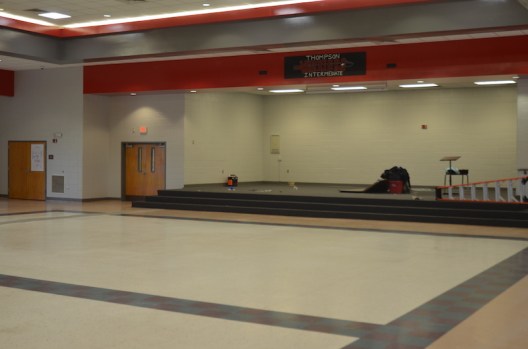 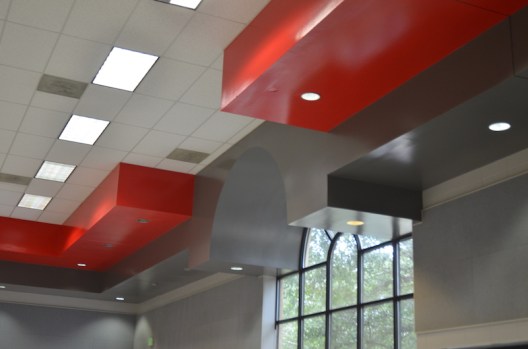 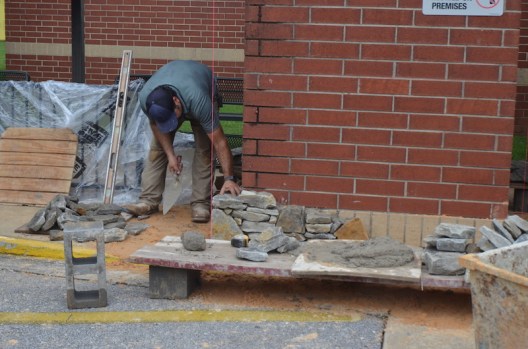 Stonework at the entrance of CVES. 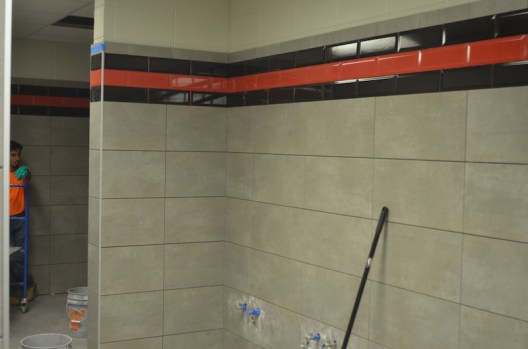 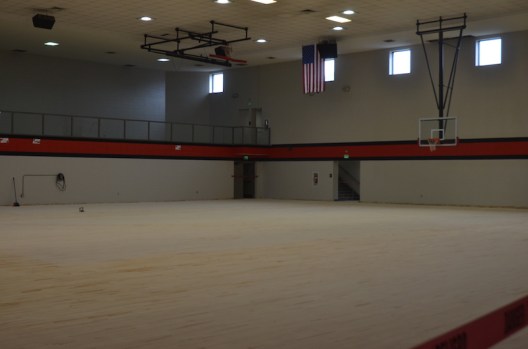 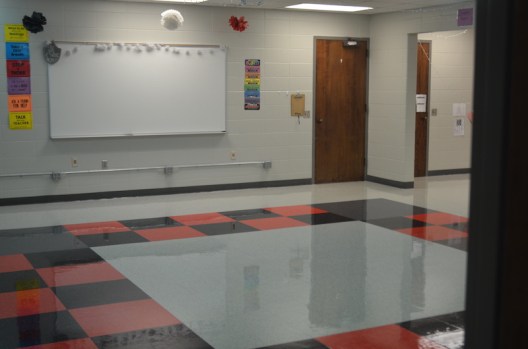 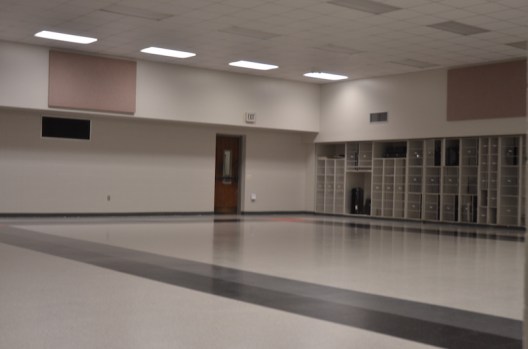 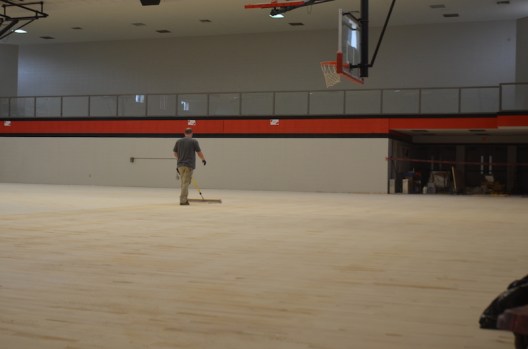 New flooring in the TMS gym. 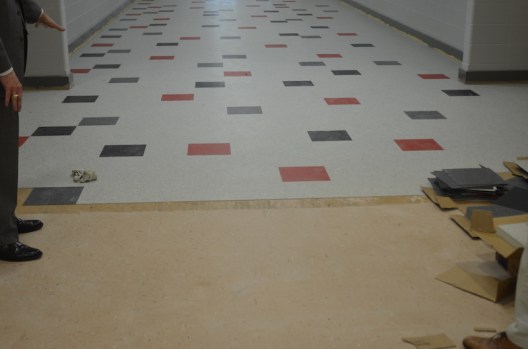 Difference between the "old" and the "new." 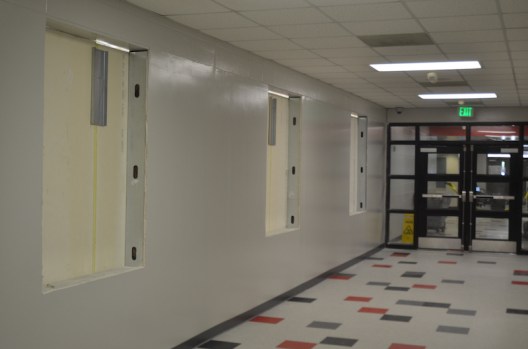 Replacement of glass hallways at CVES. 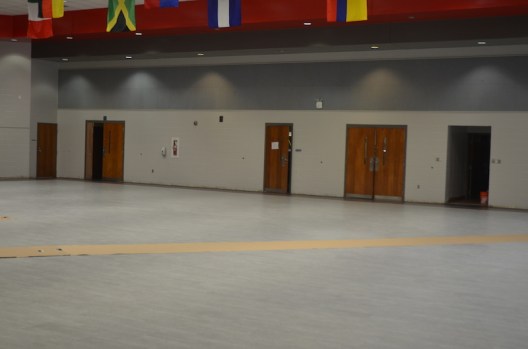 ALABASTER – Through the use of funds from state bond issue and bond refinance money, Alabaster City Schools has been hard at work renovating each of the schools in the system.

ACS Superintendent Dr. Wayne Vickers said these renovations will help to create some uniformity in color and design for students moving through the system, and would provide necessary improvements and repairs to some of the facilities that have been in use since the 1980s and ‘90s.”

“This is a very exciting time for us,” Vickers said. “We want every person in Alabaster to know we are using the state bond issue and bond refinance money to invest in all of our schools. They have all had improvements. TMS, TIS and CVES received the lion’s share of the work. We have projects at our high school and some work at MVES going on as well.”

Not long ago, Thompson Middle School moved to the former Thompson High School on Warrior Road. When that move occurred, there were a number of renovations to make it a suitable location for the school system’s sixth through eighth graders.

Even after those renovations, there was still more to be done. The building’s roof had not been replaced since the late 1980s. There was a need for improvements to athletic facilities, the bathrooms, the floors and more.

Vickers explained the school system used just over $2 million for this particular project to address some of these issues, and improve on the good aspects of the school.

Adding in the original project from a couple years back, the system has spent around $6 million on improvements and renovations.

“This school has great bones, so we are doing these things to build on that foundation and make the facility event better,” he said. “We took time before we initially moved everyone to the old school and improved the foyer and the hallways. However, there was still more to be done.”

One of the most important improvements was a completely new roof for the facility.

Vickers said this replacement was a “big deal.”

Assistant Principal Kelly Smitherman also said the new roof would greatly improve not only the experience of the students, but would help to make his job a lot easier as well.

“Once the roof got done, it probably saves us about two hours every time it rains,” Smitherman said, adding, “That is about how long it takes for us to go around and check for leaks.”

Another big part of this project was making significant improvements to the school’s two gyms.

“We are going through the gyms, which were not in great shape, and doing some renovations,” Vickers said. “We are spending a lot of time on them because P.E. is required at all middle school grade levels and we have all kinds of events here. We have a lot of teams that come in to play on this floor, so we want it to look great.”

The project in the gyms involved replacing the flooring, the bleachers and doing painting to make them more uniform with the school’s colors.

While time constraints won’t allow for all facilities to be renovated, some of the school’s bathrooms are currently receiving improvements.

“While we are hosting events here the bathroom will be used by everyone,” Vickers said. “We are planning on having all new fixtures. We are really talking about changing the entire look of the building. Eventually, our goal is to replace all of the restrooms.”

Vickers explained ACS wanted to ensure the system capitalized on the good structure and foundation of the facility, while also bringing it into a new era, more akin to the look of the high school.

“This school has some perks that many school districts would really be jealous of,” Vickers said. “We have a 640-seat auditorium, along with an 1,800-student gymnasium and a second gym. There are more projects we would like to do here at the middle school, but this is what we could get done over the summer. There is still a lot to do, and we plan on chipping away at those things over the next few years.”

At TIS, the school system spent around $700,000 on projects. These were mainly aimed at improving the flooring and painting the school.

“This is a very nice facility. We converted it from the middle school to the intermediate school. It is perfect for that,” Vickers said. “The main focus here was replacing the flooring and painting the school for consistency with our school colors. Our colors work, and when I find something that works I like to keep using it.”

Even with ongoing construction, a quick walk through the building reveals a stark contrast between the old flooring and the new.

One of the most striking improvements is in the school’s lunchroom area, where new luxury vinyl tile (LVT) flooring is being installed.

“This may not seem like a lot, but just converting the school to our school’s colors makes us look like one system,” Vickers said. “This LVT flooring never has to be replaced. Maintenance is very easy, which will help us save down the road.”

As Vickers mentioned, a lot of the work at TIS is working to improve uniformity among the schools with color scheme.

“What I am really excited about is that you can come here now and look at the difference in colors,” Vickers said. “There is still more to do, but we are taking care of what we can accomplish over the summer months, and we plan to come back and do more later on. Slowly but surely we are getting there.”

Other improvements include restroom design and flooring in other areas of the school to help promote that concept.

Similar projects are underway at Creek View Elementary. It was one of the two buildings to receive a brand-new roof.

“That was a big factor for us,” Vickers said. “Replacing things like that will help us avoid some long-term issues.”

Stonework is underway at the entrance to the facility, which will put it in line with some of the school system’s other buildings.

Vickers said the idea for CVES was to improve on what the school already had, and do some work with color design and flooring.

“We are getting that LVT flooring in here and we are also refreshing the restrooms,” he explained. “They have started painting and carpeting in the library media center. Most of these are the first improvements done to the school since the ‘90s.”

The flooring in the hallways also kept with the school system’s desire to incorporate its school colors throughout most facilities.

“By the time we get through with this part of the project we will have LVT flooring, new panels, new curtains and new carpeting. It is a big refresher for the entire school,” Vickers added. “The restrooms are getting new partitions, sinks, countertops and we will come back and do an epoxy floor at a later time.”

Anyone who has been in the facility might recall the glass hallways at different spots. With this new phase of constructions, the glass was taken out and panel walls were added.

“This makes a big difference because it is a much more secure environment without the glass,” Vickers said. “The glass walls did not offer a lot of security. We really wanted to make a difference with the time we had.”

All of these improvements were designed to make the ACS system a more inviting and welcoming place for students, parents, faculty, staff and visitors at the different facilities.

This phase was done to expand on projects that happened a few years ago, while also looking at sustainable options for the future.

“We are really excited about this,” Vickers said. “We have spent right around $5 million on this, including the two new roofs. The whole point is that we are trying to continue what we started a few years back. We want to upgrade our facilities and make sure every school is prioritized and gets the attention it needs. That will allow all grade levels to feel comfortable in their buildings in a clean and neat environment.”

Vickers thanked McKee and Associates and Volkert, Inc. for their participation in making these projects possible.

“These two groups understand what we like and will make sure it happens for us,” Vickers said. “Both of them have been involved in school projects since the inception of Alabaster City Schools. They are responsible for making this happen in such a constrained time period.”