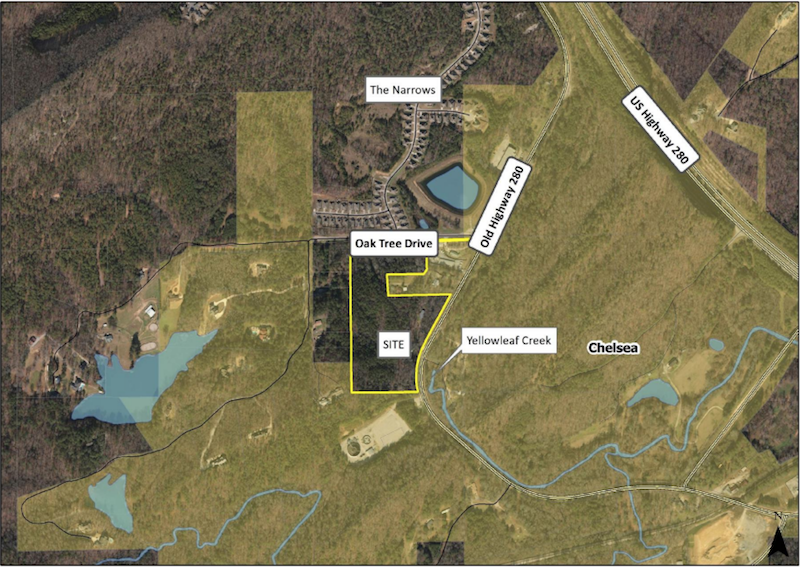 PELHAM – Plans for two new residential developments in the Columbiana and Chelsea areas are moving forward.

The Shelby County Planning Commission on July 19 unanimously approved the master plan for Iron Wood Lakes, a subdivision to be constructed on unzoned property in the Shelby community near Columbiana, and the preliminary plat for Oak Tree Subdivision, which is planned for unzoned property near Chelsea.

Iron Wood Lakes will be a 15-lot subdivision developed on 125 acres of wooded and undeveloped property located off Beaver Creek Road, just south of Columbiana between Shelby County 47 and Shelby County 37, also known as Egg and Butter Road.

The proposed lots range from 5 acres to more than 11 acres with an average lot size of 8.36 acres, or about 0.12 lots per acre.

Several lots will have frontage on the existing lake situated on the southern half of the property.

All lots in the development will be accessed via Beaver Creek Road, a substandard dirt road that will require improvements prior to the recording of the subdivision’s final plat.

“The low development density of the planned development is compatible with transition area and rural landscape development,” reads the applicant’s letter regarding conformance to Shelby County’s comprehensive plan. “Safety improvements to Beaver Creek Cemetery Road will be made as approved by the Shelby County Highway Department.”

The Planning Commission voted 6-1 to approve the preliminary plat for Oak Tree Subdivision, a 55-lot residential development planned for 19.41 acres of property close to the intersection of Old Highway 280 and Oak Tree Drive, near Chelsea.

Lot sizes in the proposed subdivision range from about 5,000 square feet to 14,395 square feet.

The property is located just south of The Narrows, a master planned community also in unincorporated, unzoned Shelby County.

Previously, the applicant, William L. Thornton, had requested a waiver of the minimum one-quarter acre lot area requirement for a development designated as a Tier 1 according to the Land Suitability Analysis.

On April 5, the Planning Commission approved the waiver request after determining the waiver would not be in conflict with the goals and policies of the comprehensive plan.

“My goal (is) to preserve as much of this land as I could and still have a deal, and I believe that’s what this plan does,” Thornton said. “We tried to buffer as many places as we could.”

Several adjoining property owners submitted written comments regarding the request and voiced concerns about the proposed subdivision at the Planning Commission’s July 19 meeting.

Angela Tyler said her main concern is the noise level of the construction because her daughter suffers from a headache disorder, and Tyler and her husband work from home.

“We want to live a quiet and peaceful life,” Tyler said. “The construction alone would spike her head pain all the time.”

Jimmie Brasher said she is worried about the extra traffic the subdivision’s proposed 55 homes would create in the area.

Wally and Jenny Franklin said they are concerned about the number of proposed lots and the size of the buffer area between their property line and the subdivision.

“I think it’s great that things are being developed, but this looks like somebody wants to make a ton of money off a little piece of property,” Jenny Franklin said. “Chelsea is a wonderful place to live. There are beautiful homes there. We’re not even saying don’t develop it, we’re just saying make it where it’s nice.”

Thornton said the lot size in Oak Tree would be the same as that of The Narrows, which he also built.

Commission Member Ken Wilder said while he understood the property owners’ concerns, the developer’s request was legitimate as he had met the requirements of the land use regulations for the unzoned property.