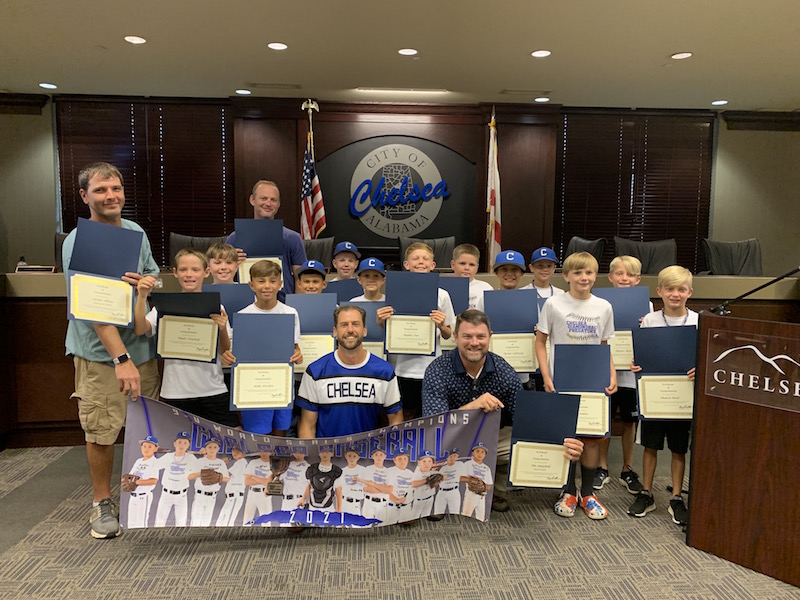 The Chelsea City Council on July 20 recognized the Chelsea 9U baseball team for winning the Tournament of Champions earlier this month. (Reporter Photo/Emily Sparacino)

CHELSEA – The Chelsea City Council approved the purchase of a new fire transport unit and recognized a local youth baseball team for winning a state title at the Council’s July 20 meeting.

Fire Chief Joe Lee said the new transport vehicle will allow him to designate the fire department’s oldest truck as the reserve unit.

“This will be our fourth one,” Lee said. “We have two that are in service all the time.”

During the same time period last year, the department had a total of 891 calls, of which 576 were medical calls and 377 were transports.

“We’re only about 19 transports behind where we were last year,” Lee said. “That’s an average of 2.07 a day. On average every week, 14 people get transported to the hospital from Chelsea. Our goal is to provide the best emergency services to the citizens of this city that we can, so every dime that you invest in us, that’s what it will go to.”

Lee said Chelsea Fire and Rescue is “ahead of the game” since it has its own transport service, unlike other cities in the area.

“It’s not a way to make money, but it is by far the best service you can provide to your citizens,” he said. “We have control from the time we arrive at your home. You will get in the back of a transport with two Chelsea paramedics and go to the hospital. We will be with you the whole time. There is no doubt the transport service is the way of the future that everybody will eventually go to.”

During the mayor’s report, the members of the Chelsea 9U baseball team received congratulatory certificates for earning a World Series title earlier this month.

As one of three teams competing in the Tournament of Champions, Chelsea went 1-1 in pool play and went on to win three consecutive games by two runs or less to claim the title.

“(It was) an interesting year to say the least,” head coach Tim Stanfield said. “These guys grew together about as good as any team I’ve ever seen. I’m proud of them.”