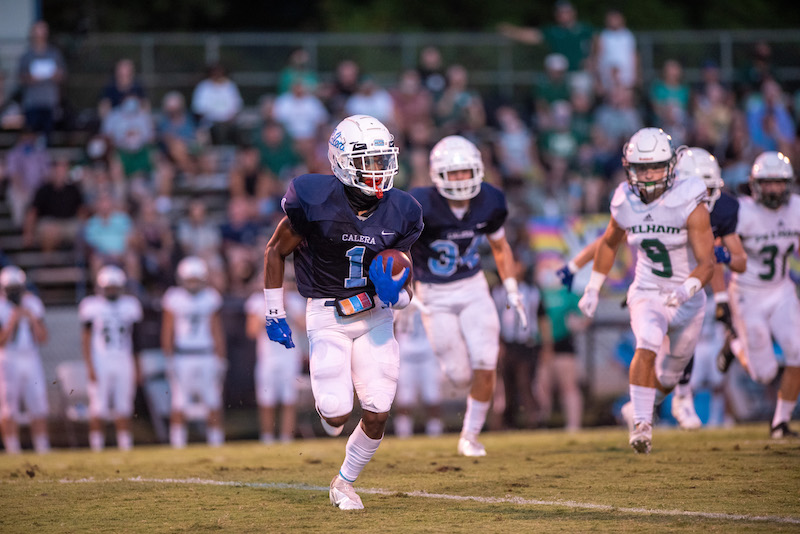 Calera’s Kobe Prentice announced his commitment to play football for the University of Alabama on Tuesday, July 27, following a junior season that featured 17.3 yards per catch. (File)

CALERA – Standout Calera receiver Kobe Prentice has chosen to play college football at the University of Alabama after announcing his commitment on Tuesday, July 27.

The rising-senior for the Eagles is coming off a special junior season in which he totaled 711 yards and nine touchdowns on 41 receptions for an average of 17.3 yards per catch.

His impressive play with a sophomore quarterback and a young team around him led to several Division I offers, including Maryland, Arizona State, Mississippi State, Kansas State, UAB, Washington State and many others.

Prentice originally committed to Maryland on June 30, where he would have joined former Thompson quarterback Taulia Tagovailoa.

But one day later, Nick Saban and the Alabama Crimson Tide extended an offer.

That led to a quick decommitment from Prentice, who needed time to process the new offer in order to make the right decision.

After just less than a month of mulling over the right fit, Prentice, who is a four-star according to 247sports rankings and a three-star in the composite rankings, decided joining the Crimson Tide was the right fit. 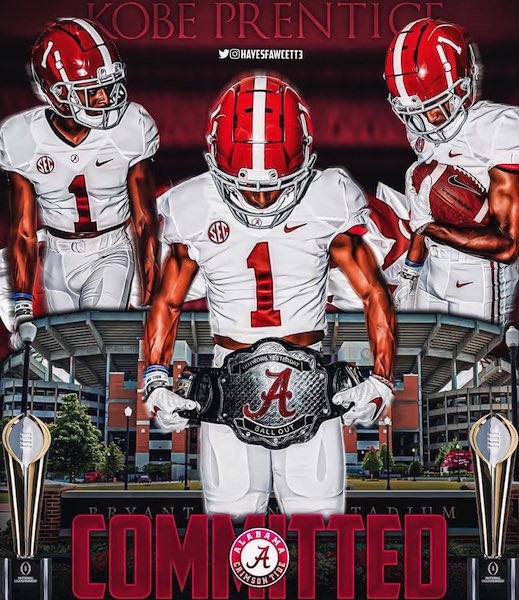 He shared is announcement on Twitter with the words “To God be the glory.”

One reason Alabama fell in love with Prentice wasn’t just his physical and athletic presence, but his speed.

As the top receiver in the state and the 11th best player in the state, the Crimson Tide couldn’t pass on extending him an offer, especially after seeing the 4.3 times he ran during camps this summer.

During the 2020 indoor season, Prentice took his first stab at running track and improved throughout the season in the 60-meter dash.

He went from running the race in 7.30 seconds at the beginning of the season to finishing third in the state meet with a time of 7.07 seconds.

Then, during the indoor season, Prentice showed even more improvement in his speed despite close to a year off due to COVID-19.

He came out and finished first in three of his four events, never finishing below third or running a time slower than 7.13 seconds. In the state championship, he went on to set a personal record with a time of 7.05 seconds to finish second in the event.

And this past spring, he continued to impress by running in both the 200-meter dash and 100-meter dash.

Despite it being the first time competing in each competitively, he finished eighth or better in every event and had 10 top-two finishes, including four victories.

Now, already building more muscle and the team’s top target with great hands, he’s become one of the fastest receivers in the state that defenses struggle with in coverage.

With all of those combined attributes, Prentice should fit in well on an offense that has churned out receivers in recent years such as Jaylen Waddle, DeVonta Smith, Henry Ruggs, Jerry Jeudy as well as others.

Right now, however, his focus remains on leading the Eagles during the 2021 football season.