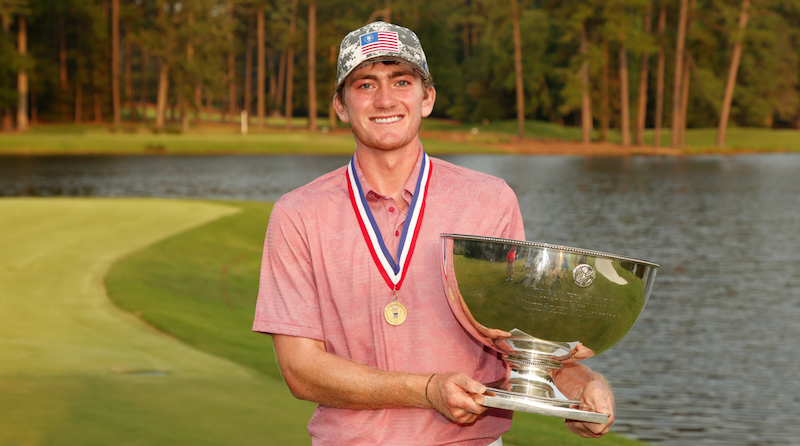 PINEHURST, N.C. – After getting it up and down on the 34th hole of a marathon match in one of golf’s biggest events, Nick Dunlap stepped back and watched with anticipation.

His opponent, Cohen Trolio, sent a put toward the hole needing it to find the bottom of the cup to stay alive in the 73rd U.S. Junior Amateur at the Country Club of North Carolina on Saturday, July 24.

As the putt raced by the hole, Dunlap’s head dropped in disbelief, before embracing in a hug with his caddie after winning golf’s most prestigious junior tournament at the age of 17.

Dunlap, a former Spain Park player and member at Greystone Golf and Country Club, didn’t just win the 36-hole match play event against Trolio, but had to compete in two stroke-play events as well as five additional rounds of match play just to earn a spot into the championship match. 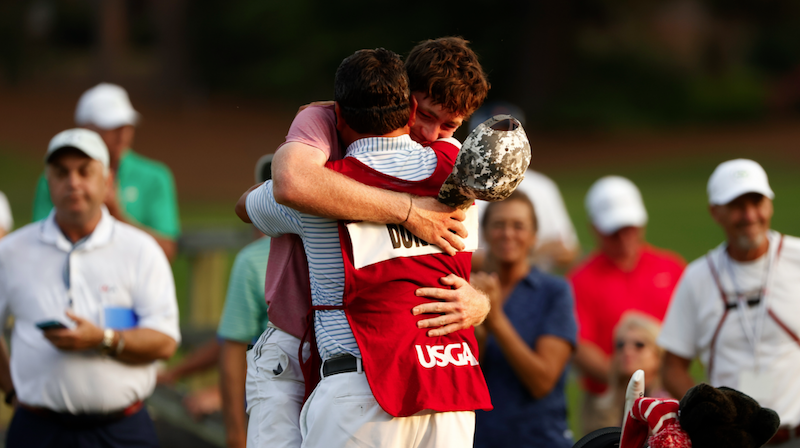 Dunlap gives his caddie a hug after winning the championship to etch his name in history and earn a spot in next year’s U.S. Open. (Chris Keane/USGA)

In the stroke play portion of the tournament, he posted back-to-back rounds of 68 to get to 7-under par, which was good enough for third place, finishing only behind Andrew Goodman at 8-under and Kelly Chinn at 11-under.

With the top 64 players advancing out of the stroke-play portion of the tournament, he easily advanced to take on Jack Turner in the Round of 64.

Dunlap quickly went two up in the first three holes and never trailed. He won five of six holes between the eighth and 13th to go to five up.  Turner responded by winning the 14th and 15th holes, but two pars on the 16th gave Dunlap a 3 and 2 win to advance.

Easy going so far, Dunlap started to face tests in the next three rounds.

In the Round of 32, he fell behind on the second hole, but proceeded to win six holes in a row to take a five-up lead. Hunter Thompson, his opponent, then answered with three wins in a row, before eventually getting to one down with two holes to play.

That’s where he faced his most difficult test of the tournament.

Taking on Matthew Comegys, who finished 14th in the stroke play portion of the tournament, Dunlap took a three-up lead through eight holes.

Comegys, however, bounced back by winning holes 11, 13, 14 and 15 to square the match with three holes to play. Both made pars on 16 and then posted matching birdies on 17 and 18 in clutch fashion.

But after pars from each on the 19th hole, Dunlap drained a birdie putt on the 20th to keep his tournament alive in clutch fashion. The win on the second playoff hole marked his first since the eighth after giving up momentum on the back nine.

Dunlap then faced another nail biter in the quarterfinals.

After winning the first three holes to gain an early lead once again, opponent Robbie Higgins came back with wins on the ninth and 10th holes to get to one down.

From there, however, Dunlap went into protection mode and took risks only when he needed to. He matched Higgins the rest of the way with pars on holes 11-17 and a birdie on the closing par 5 to win the match one up.

In the semifinals, the script flipped for Dunlap, who fell behind through the first nine holes. He went two down and faced adversity going into the back nine for the first time during the tournament.

Yet again, however, he found a way following several tight matches in a row. His confidence seemingly grew on the 10th tee, as he went on to win five of the next seven holes to storm from behind and win the match 3 and 2.

He birdied four of the seven holes played on the back nine to put an exclamation point on a stellar week by earning a spot in the championship match.

In the 36-hole match-play event, the two junior golfers found themselves in a tight back-and-forth battle.

The competitive nature of the match seemed to ease the tension of what was on the line, but neither created much separation.

Dunlap played with at least a one-up advantage for 16 of the first 19 holes and didn’t trail for the first 22 holes of the match.

Trolio, however, bounced back after going two down through 17 when he won holes 18, 20 and 23 to take his first lead of the match at one up.

But after three halved holes in a row, Dunlap flipped a switch.

He made a birdie and four pars in a row to win four of the next five holes and storm back for a three-up lead.

Trolio got one back on the 33rd hole, but Dunlap’s up-and-down par on the 18th ended it when Trolio made a bogey on the 248-yard par-3.

With the win, Dunlap joins names like two-time champion Jordan Spieth and three-time champion Tiger Woods as notable winners of the tournament. Other popular champions include names like Hunter Mahan, Will Zalatoris, Brian Harman and David Duval.

A University of Alabama commit, he will also get an exemption into next year’s U.S. Open at The Country Club in Brookline, Massachusetts, as well as the next two U.S. Amateur tournaments.