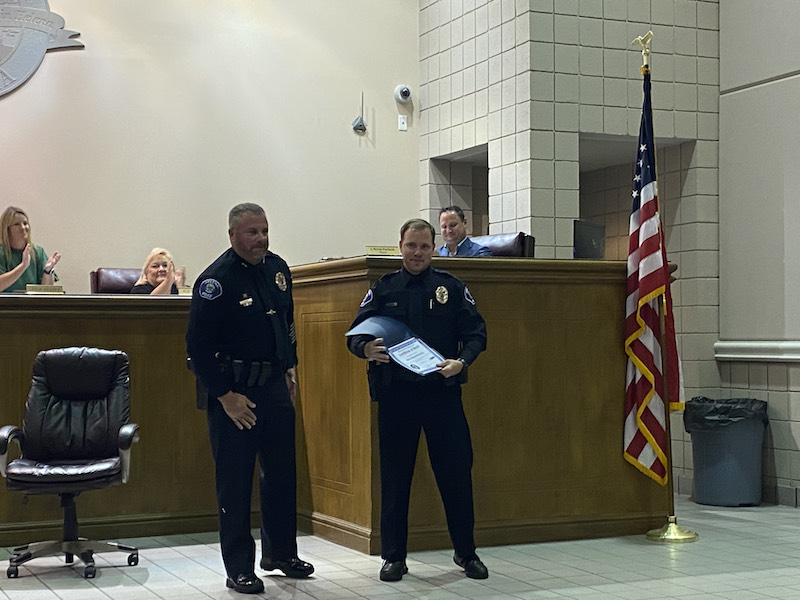 Helena Police Officer Blayne Browning received a Certificate of Merit for his work in working with a person in crisis, and deescalating a potentially fatal situation. (Reporter Photo/Nathan Howell)

HELENA – Helena Police Officer Blayne Browning was recognized during a Helena City Council meeting on July 26 for his work in deescalating what could have been a fatal situation.

Browning was presented with e Certificate of Merit by HPD Chief Brad Flynn and the city of Helena for his work in defusing a stressful situation last month.

“Our patrol shift received a call about a gentleman who was parked in the middle of the roadway. Officer Browning was the first one to show up,” Flynn said. “He was acting irrationally, wasn’t communicating very well, had his music in his car turned up and Officer Browning decided to speak with him more.”

HPD and the City of Helena were recently recognized as the only municipality to achieve 100 percent sensory training compliance. Flynn said this training, and Browning’s character helped to peacefully resolve the situation.

“He was having some severe emotional and psychological problems. Everything had apparently come to the surface that day. A lot of times, the end result in those situations isn’t always the way we want it to be,” Flynn said. “Officer Browning proved to be the exception.”

Browning was not acting only as a response to that training, but also from the heart.

“He saved that man’s life,” Flynn said. “The end result of that situation was the man voluntarily getting into an ambulance and seeking help. It was even to the point where he asked Officer Browning for his number. He gave him his personal cell phone number, not the dispatch number.”

These efforts became even more real for the department after it received a follow up from the man’s wife.

“Later that evening, this man’s wife contacted me,” Flynn said. “She said ‘I just wanted you to know how much we appreciated how your officers interacted with my husband. Previous incidents with law enforcement didn’t end in a positive way.’ She told me that last of which had law enforcement officers pointing their firearms at the man.”

Due to his training and character, Browning was able to find a better way to address a stressful situation. He saw an immediate need and did what he could to fill it.

“I could not be prouder of Officer Blayne Browning,” Flynn said. “He is an asset to this department and the city. In respect and appreciation for what he has done, I am awarding him this Certificate of Merit.”