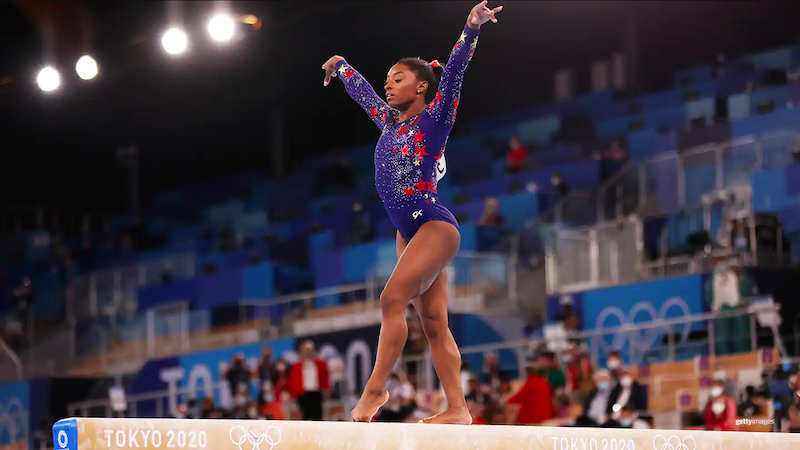 Simone Biles made waves when she decided to step away from the Olympics due to mental health. (Contributed/Team USA)

When Simone Biles decided to step away from the U.S. Gymnastics team, my head went a million different directions.

At first, I couldn’t fathom how an athlete on the biggest stage could simply just step away because she needed a mental break.

This is the Olympics. You’re representing more than yourself, you’re the face of the team, the country. How do you not power through? So many dream of being an Olympian, and she just decided on that day she didn’t mentally feel like competing.

I thought to myself, “Could you imagine Tiger Woods or Michael Jordan or Michael Phelps or Roger Federer saying they just couldn’t handle the mental aspect of competing on the biggest stage?”

It’s what they train for their entire lives, to be mentally strong and win championships or medals at the top of their respective sports.

Why couldn’t Biles just go out and give it her best shot? We would rather see her at least compete at less than 100-percent than give up.

On a daily basis, the majority of us are mentally drained at some point, yet we fight through because if our job doesn’t get done, we get fired.

Then, I sat back and reflected on those thoughts very quickly.

As a society, we place so much importance on getting the job done no matter the cost because we think that is what determines how successful we are in life or how much money we make.

When I reflected on that, I quickly retreated on my original thoughts of Biles and realized our priorities may be misplaced.

Aside from the dangers of competing with a mental block in her sport, which is much different than any of our daily jobs, she realized taking care of herself was more important than performing just to give others what they want.

It’s another reason to look up to Biles as an example to a younger generation and all athletes.

Obviously, we can’t just give up in sport or our job, but if you are dealing with mental challenges, it’s at least something to talk about with your boss, family, coaches, etc.

Anyone with a heart will take the time to help.

Jobs and sports come second to your own life, because the second you leave the job or walk off the field for the last time, the first thing on the minds of the people in charge is how to find a replacement.

It’s a sad reality, but one that should go to show we need to focus on our own mental health before worrying about others.

Some don’t agree with Biles’ decision or the praise she has received from it, saying it matches with a new culture of everyone getting a trophy or praised even when they don’t succeed.

She did welcome the attention by claiming herself as the GOAT and working to become possibly the greatest gymnast ever, but when she decided to call it quits at this year’s Olympic games, she didn’t win.

She gave up on all individual chances to win a medal, that’s how much her brain was impacting her. She didn’t get a participation trophy, she made the conscious choice not to compete.

Clearly she was struggling if she forewent the opportunity to win an Olympic medal.

Imagine the thought process of making the decision. She had to consider the millions of people that would be hurt, she had to think about all of the sponsors and money involved. That had to make her sick to her stomach, yet she still decided to do it. That really tells you all you need to know.

I don’t feel bad that she has the weight of the country on her shoulders because she earned that respect through hard work her entire life.

But I can’t pretend to know what that pressure is like, and neither can any of you.

I was confused at first, but now I applaud Biles for her bold decision. She gave up on a dream she’s worked every day of her life for; the least we can do is support her.