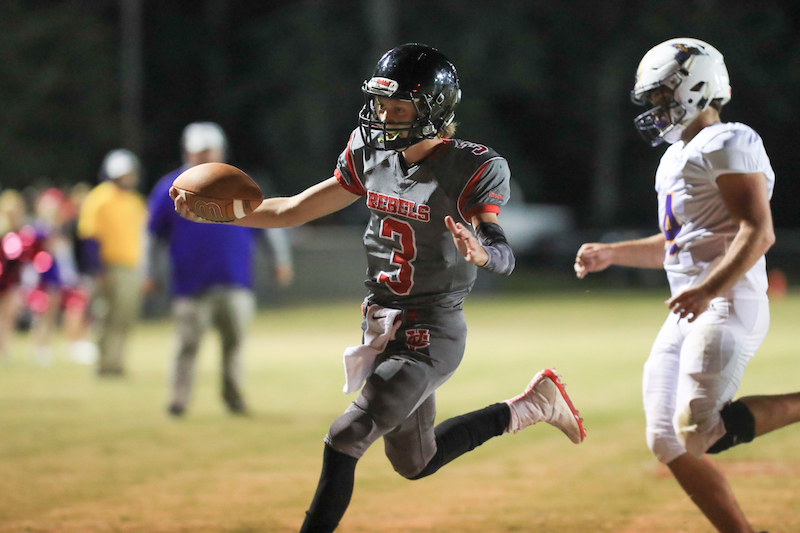 The Coosa Valley Rebels head into the 2021 season rejuvenated under head coach Vince DiLorenzo and hope that leads to wins. (File)

Winless the last two seasons, Coosa Valley has stepped up to the plate with one of the state’s hottest offseason coaching hires when the Rebels brought back Vince DiLorenzo.

DiLorenzo has coached at the highest level in the state and even won a state championship with the Rebels in 2010 before departing to Georgia.

Now, he’s back and he’s got his hands full.

He said he took the job because he owed it to the school after what they did to help his coaching career, and now he wants to take them back to the promise land.

Doing so, however, will mean completely retooling a team that has gone a combined 0-14 the last two seasons and didn’t even play 11-man football two years ago.

DiLorenzo is taking the term retooling seriously too. He knows the Rebels can’t play the same game they have the last several years, especially after averaging 3.3 points per game and giving up 47.3 points per game last season.

He has basically taken his roster and decided to see where each person looks best on the field before assigning any positions.

Going into fall practice, he at least has a feel for where he wants players to start, but he won’t be shy about moving them to where he thinks they may fit better.

That applies to the quarterback position as well, but Canaan Johnson and Konner Steele seem to be the front runners at the position.

Steele got reps at the position last year as a freshman, while Johnson is a senior who looks the part due to his physical presence. Finding the right fit there can make or break the Rebels in year one.

What will help whoever does get that position, however, will be a deep unit of receivers.

The Rebels won’t have a ton of experience at any position, but they will have more depth than they have had each of the last two years combined.

At receiver, seniors Hayden Dooley, Weston Dooley, Hunter Hill and Justin Tarwater will all compete for time, while juniors Lukas Bynum, Austin Griffith and Connor Hebson are juniors who should get looks as well.

The Rebels will also have depth up front, but most will have to play on both sides of the ball.

Nick Shepard will lead the way as a senior, while Carter Gunnells, Jacob McGaha, Levi Ponder, Kale Riddle and Hayden Whitley are expected to play key roles as well.

Perhaps the biggest highlight of the defense will be at linebacker assuming players pan out as expected.

Johnson, Hayden Dooley and Justin Tate are all expected to be leaders at the position, while Bynum, Josh Allen and Bryce Wilson will add three others for depth.

The secondary should be improved as well thanks to more numbers. With several of the receivers moving over to the defensive side of the ball, some of the best athletes on the team will look to fill a position.

Weston Dooley and Hill are two standouts, while Griffith and Hebson should also earn starting time.

Prediction (2-8): I am a believer in what Vince DiLorenzo wants to do at Coosa Valley, but it won’t happen all in one year. Winning two games would be a monumental turn around, and the potential is there for that to happen. First and foremost, however, the Rebels just need to start scoring points. They were shutout in six of nine games last year and scored six or less in all but one game. With the addition of several athletic playmakers and a few returnees, DiLorenzo will get the proper tools in the right place, which I do think will lead to a win for the first time since 2018. But it’s a process that is going to take time, meaning there will still be struggles at times this season.