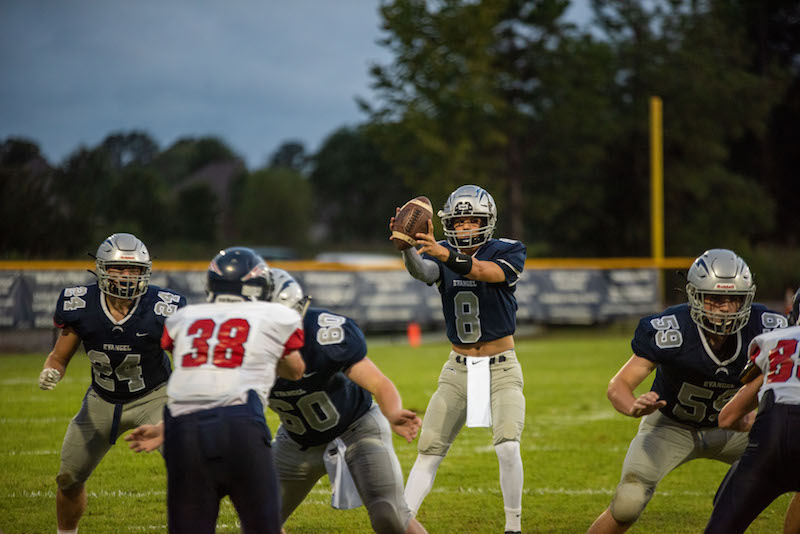 Evangel quarterback Eli Whitfield is one of many players back on this year's team who makes the Lightning a threat for another national championship. (File)

With one of the most difficult 8-man football schedules in the country, the Evangel Lightning will have their work cut out for them in order to win another national championship.

Winners of three consecutive 8-man national titles, however, the Lightning enter this season hungry after falling short of the ACSC State Championship for the first time under head coach Tim Smith.

Smith, however, now enters his fifth year as the leader of the team with one of the largest rosters he’s ever had.

The Lightning will lose a lot of production, especially on the offensive side with the departure of last year’s Player of the Year in Jett Lodge.

Lodge totaled 1,043 yards as the team’s leading receiver last year, while also making an impact defensively for the Lightning.

Helping with is departure, however, will be the return of quarterback Eli Whitfield to lead the offense.

A junior, Whitfield totaled 2,100 yards and 36 touchdowns last season and is poised for an even better season this year.

He’ll be one of the few familiar faces back on the offensive side of the ball with very few catches or carries back at receiver and running back.

That will put a lot on Whitfield’s shoulders, but it’s a task that excites him.

And while there won’t be a ton of returning experience around him, there is a lot of athleticism and plenty of depth.

Tyler Wilson will be the leader at running back after playing in eight games as a sophomore, while Jake Parker is the leading returner at the position thanks to 200 yards last year. Those are two of five players expected to tote the rock this season.

Receiver will have even less back with Harris Black’s six receptions the most of anyone returning this season. However, Black is one of the team’s best athletes and was on the field last year, while Judah Thompson, Connor Nettles, Aidan Lau, Hayden Black and Zion Thompson should add other trustworthy hands for Whitfield to throw to.

Perhaps the biggest positive for the offense will be the return of four offensive linemen. Carson Donavan and Caleb Lumpkin return as starters, while Thomas Koch and Zach Chandler were in the rotation last year.

Their presence should help the Lightning have more patience as some of the new faces get their feet under them early in the season.

Defensively, 8-man football always creates challenges, but the Lightning should be strong on that side of the ball this season.

Up front, they’ll return several of those offensive linemen playing both ways, while Everson Jones will also return as a starter with a frame of 6-foot-1, 278 pounds.

The deep front will also feature Zeke Turner, Riley Mason, Thomas Coach, Chris Le and Grady Watkins. That depth is what will make it one of the most difficult defensive lines to prepare for in 8-man football this season.

Backing them up at the linebacker position will be another welcome sight thanks to the return of Dylan Weathers, who totaled 96 tackles with five tackles for loss as a junior last season.

Sophomore Kyle Jones will also return as a starter, while Kaden Jones and Hunter Atkins will bring back experience to the position.

On the back end, several of the team’s top offensive skill players, including Harris Black, Nettles and Lau, will handle coverage and making tackles in space as leaders in the secondary.

Prediction (10-1): Evangel’s first loss to an 8-man opponent under Smith as the head coach occurred last year against rival Ezekiel, causing the Lightning to miss out on the ACSC State Championship. That has this team motivated. The offense will have some growing pains, but the extra motivation and the return of Whitfield at quarterback should make help them continue to make life difficult for opposing defenses. The schedule definitely isn’t easy with Evangel set to play some of the most difficult 8-man teams in the country. But winners of three national titles in a row, it’s tough to see them losing multiple 8-man games this season with only one in the last four years. A blemish is possible due to the schedule, but the Lightning should return to glory as ACSC State Champs again this year, while also having another opportunity at a national title.