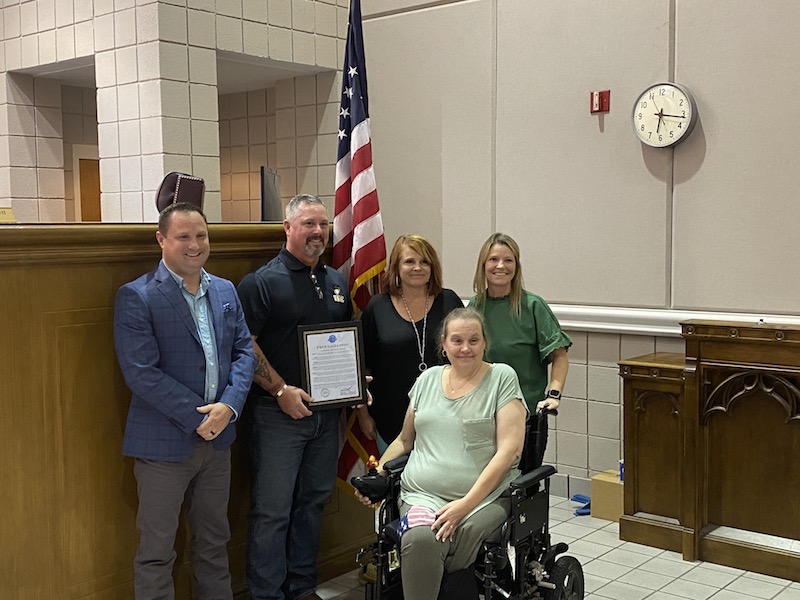 Gold Star Children’s Day was recently recognized by the Alabama Legislature. The resolution was presented to Eric Fort, who led the charge on lobbying for the day, during a ceremony on July 22. (Reporter Photo/Nathan Howell)

Because of his personal connection, Fort helped lead the charge lobbying lawmakers in the state to recognize the day, which honors children who have a parent that lost his or her life in the U.S. Army.

“Gold Star Children go back almost a century to World War I,” Fort said. “When I started reaching out on this issue, I had no idea where this journey would go. It continues the legacy of our loved one. It recognizes the pain and suffering that many children experience each day. This has been a huge milestone for us.”

Fort thanked Sen. Jabo Waggoner, who led the charge in the Alabama Senate to swiftly pass the resolution. He also expressed his optimism for the day to be recognized nationally.

“As of Tuesday, of this week, Sen. (Roger) Wicker of Mississippi and Sen. (Joe) Manchin of West Virginia introduced bipartisan legislation recognizing Aug. 1 nationally as Gold Star Children’s Day,” Fort said. “It is what I like to term ‘conversation to legislation’ in 14 days. I had no idea we would get this recognition this quickly we would get national recognition. We wanted it for years.”

During the ceremony, Alabama House Rep. Kenneth Paschal reflected on his service in the U.S. Army and how important it was for Alabama to achieve this milestone.

“As a 21-year veteran myself, I just want to applaud Eric for carrying the cross for so many,” Paschal said. “That is a true testament as far who you are and what you stand for. The children of our veterans have a task to carry on that legacy. It is great to start here in Alabama, and we hope to see the rest of the country follow.”

During the Helena City Council meeting on July 26 there was further recognition for the holiday when the Council presented a proclamation officially recognizing the day in the city.

“We are not reinventing the wheel with this,” City Councilmember Leigh Hulsey said. “We are taking something that is already in existence and tailoring it to our community. Eric Fort worked very hard and he would not try to take any credit. He defers to all of the Gold Star Children anytime you bring this work up. He is very quick to be humble about that, and defer to himself a representation as that group of individuals. They have suffered significant loss, challenges and made incredible sacrifices to make sure we can do the things we get to do.”