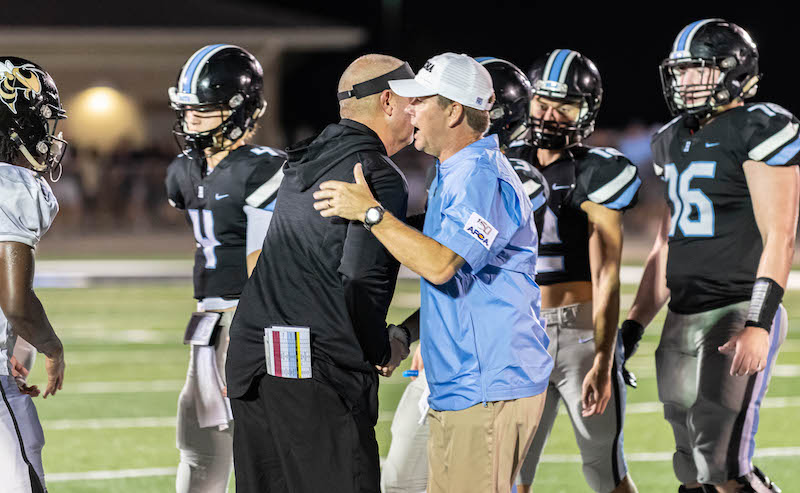 Helena head coach Richie Busby shakes hands with Bart Sessions following a game between the two in 2019. Busby has been named the head coach of the North team in this year’s North-South All-Star game. (File)

HELENA – Richie Busby’s impact at Helena has been felt in his first three years leading the Huskies; now, he’s an All-Star.

Heading into his fourth year as the leader of the Helena football program, Busby was named the head coach of the North-South All-Star game in an announcement from the AHSAA on Thursday, July 29.

When he took over as the head coach of the Huskies ahead of the 2018 season, Busby’s goal was build the program in the weight room and improve from there.

It has quickly paid off.

In three seasons, he has led the team to a combined record of 20-13, including back-to-back winning seasons of 9-2 and 7-5 the last two years. That has also earned the Huskies two consecutive appearances in the playoffs, a region title and a runner-up finish in the region standings.

Busby will lead the North team during the All-Star game, coaching some of the state’s best players when the game kicks off at 7 p.m. on Friday, Dec. 17 at the University of South Alabama’s Hancock Whitney Stadium in Mobile.

During his first season leading the Huskies, Busby quickly helped them see hard work pay off.

After a 0-4 start to the 2018 season, Helena finished 4-2 the rest of the way with one of the losses by six points in overtime.

A year later, Busby helped the Huskies finish the regular season 9-1 with the lone loss coming to Hueytown by eight points. They then went on to fall to Clay-Chalkville 17-0 in the opening round of the playoffs.

Last year, however, might have been his best coaching job to date.

Not only was he forced to get his team ready for a full season on little work due to the COVID-19 pandemic, but Helena was impacted possibly more than any other team.

After a 2-2 start with two losses by six points or less, the Huskies were forced to forfeit the next two games, including a rivalry and region matchup with Pelham to fall to 2-4 on the season and 1-2 in region play.

Then, for the third week in a row, they couldn’t play when Chilton County forfeited a game against Helena.

It gave the Huskies a win and a 3-4 record overall as well as a region win to bring the region record to 2-2, but it also kept them off the field for three consecutive weeks.

The rest seemed to do them well, sparking a four-game win streak to end the regular season. That was good enough to finish second in region play and earn home-field advantage in the opening round of the playoffs.

That home-field advantage paid off when Carver-Montgomery came to town and Helena was able to pick up a 22-19 comeback win to advance to the second round.

The Huskies lost next week to Spanish Fort, who made it all the way to the state championship, but it marked a remarkable turnaround after it seemed as if the season might be lost midway through the schedule.

Busby also went 40-17 in five years at Fultondale, reaching the playoffs each year.

He will now look to make this year the most historic in school history at Helena before taking the honor of being an All-Star coach.