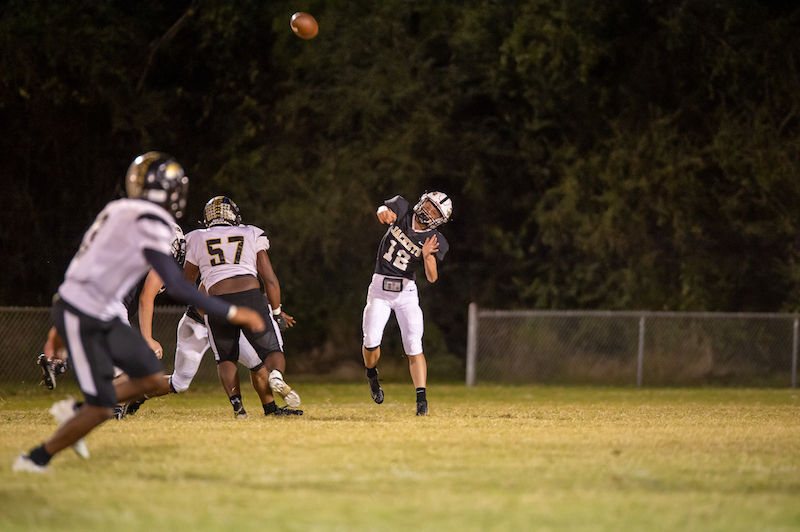 Vincent quarterback Blake Allums, above, is one reason the Yellow Jackets have optimism in putting together one of their best seasons in the last eight years in 2021. (File)

It’s year four for Vincent head coach Lucas Weatherford, and this season seems as good as any for the Yellow Jackets to make a splash.

Vincent hasn’t had a winning record since Zeb Ellison was the coach in 2013, but the Jackets have shown improvements in different aspects of the team each year under Weatherford.

Now, it’s time for them to put it all together in his fourth year, and the talent seems to be there to at least hover around .500 this season.

One of the reasons to feel so optimistic if you are a Vincent fan heading into the season is the offense.

Last season, the Yellow Jackets averaged 25.2 points per game, scoring 35 or more in four of the seven games they played.

That mark should improve even more this season with the return of several key playmakers at every position on the offensive side of the ball.

Blake Allums will return for his junior season as the starting quarterback. Allums split time with Will Harris last year, but ultimately earned time because of his play.

Now, he has taken full control of the offense and is expected to have a big season with several athletes back around him.

One of those key players returning will be Jermarey Lawson at running back.

Vincent will lose all-around athlete Tae McGregor, who totaled more than 2,000 all-purpose yards in his high school playing days, but Lawson will help soften the blow.

Helping open holes and take pressure off the run game will be a strong core of receivers led by returning starter Zac Carlilse. A junior this season, Carlisle only totaled 15 catches last year, but turned them into 238 yards and three touchdowns.

He will also be joined by Tray Youngblood and Aiden Poe, two of the team’s top athletes, which should help the Jackets’ have more options in the pass game than they have had in years.

As exciting as those playmakers are, it’s the offensive line that creates the most hype for the offense.

Replacing Paul Albright will be a tall task, but four returning starters will do wonders this year.

Evan Swain, Jacob Carter, Easton Fields and Ty’Qun Goodman are all back up front this season, weighing at least 210 pounds. Their experience adds a whole new level for what this year’s offense can do.

Up front on the defensive side of the ball, several of those same players will return and play on both sides, while Grayson Gulde will join them. Goodman was one of the leaders at the position last year with 49 tackles, including seven for loss and five sacks.

Some of those athletes, however, will slide back to play linebacker. Goodman will be one of them, while Swain returns as the team’s leading tackler following 100 tackles, including 12 for loss and seven sacks last year.

Rounding out the defense will be one of the most difficult aspects of Weatherford’s job this year. Gone are Harris, Caleb Scott and Cobe McKenzie as starters.

Those departures will leave big holes to fill, but doing so will determine whether or not this year’s defense is improved.

Carlisle, Youngblood and Lawson will all help overcome the losses, but all play on offense as well, making depth key. Behind them, twins Nolan and Gavin Kratz will help, while Poe will also play on both sides.

Improving the defense will likely be the most important task heading into the season, making the jobs of those in the secondary as important as any.

Last year, that side of the ball gave up 41.4 points per game, including 28 or more in every game and 50 or more in three games.

The offense should be as good or better than it was last year, but if the defense doesn’t improve, that won’t matter.

Prediction (5-5): I may be stepping out onto a limb with a .500 prediction for a team that has only done that once in the last seven seasons, but I’m a believer in Weatherford and the direction this program is heading. Had the Jackets played the first three games last year instead of forfeiting each due to COVID, they could have easily won five games. This year, the offensive talent is there to do it, but the defense has to show improvement from giving up more than 40 points per game. If that correction happens early, I wouldn’t be shocked by a 4-1 start. From there, it would all depend on how the Jackets finish, but the culture at Vincent has changed, and the team is starting to believe.