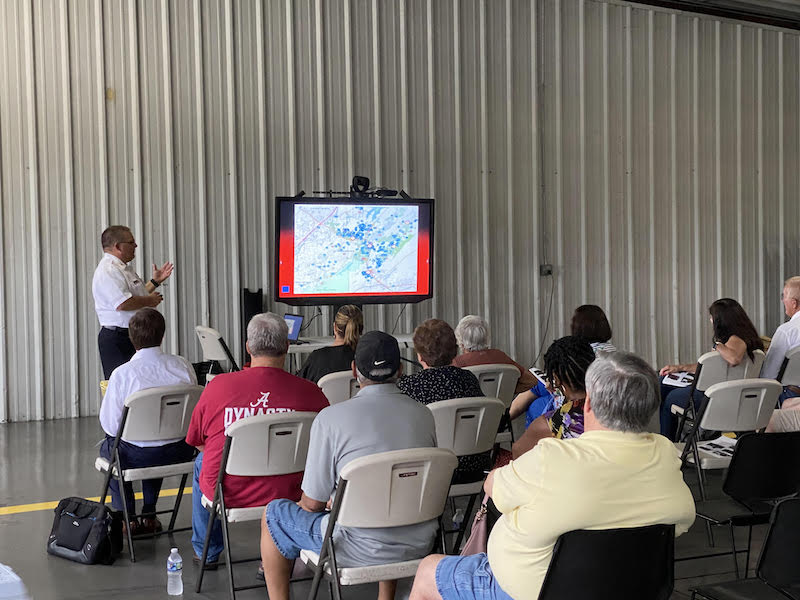 Residents gather at a July 27 Cahaba Valley Fire District meeting to continue an ongoing discussion regarding a proposed increase in dues. (Contributed)

Fire Chief Buddy Wilks said during a community meeting on Tuesday, July 27, that the decision stemmed from concerns over a provision in the plan outlining a possible fire dues increase for several communities in the district.

“When we started this whole proposal, we pushed for a flat rate of $593. We took that to a couple meetings and got feedback as well as concerns,” Wilks said. “So, based on that, we have made a lot of changes, which have come directly from talking to people in the district.”

The proposed dues increase was unveiled earlier this month as part of a multi-million-dollar quality improvement plan aimed at addressing staffing shortages and facility needs at each of the district’s three fire stations.

However, many residents initially expressed opposition to the plan’s restructuring of the department’s dues fee schedule, which would have transitioned from a 12-tier rating scale based on property value to a flat-rate fee tied to the district’s median home value.

The Shelby County Tax Assessor’s Office currently appraises the average home value in Cahaba Valley at approximately $362,000. Applying a percentage assessment based on that standard would have raised fees to about $593.84 a year, or $49.50 a month.

That model would have generated an additional $3 million from residential properties over the next year, increasing the department’s annual fiscal budget to approximately $5.8 million to cover more personnel and operating expenses related to an expansion of services.

During meetings, some residents supported the new fee structure, viewing the dues increase as a necessary and vital cost to maintaining an adequate emergency response force.

Others expressed apprehension at such a steep fee hike so quickly, with the last major change in the district’s fire dues occurring in 1999.

“People that we spoke to want to keep everything based on the home values. The main concern was the equity of increase across the board,” Wilks said. “We now have incorporated some new proposals, but keep in mind our ultimate goal that we want to try to get to is still $5.8 million. That will help us do everything we need to do.”

According to Wilks, some residents specifically felt that the flat-rate fee structure would disproportionately burden community members in lower tiers while at the same time exempt residents with greater home values from any dues increase whatsoever.

Under the previous proposal, fire dues would have remained the same for residential properties with values greater than twice the median home average, which is around $724,200.

Wilks said that decision was initially considered because those homeowners already pay more than $593 per year, and that every proposal that the department recommends aims to be as equitable as possible.

During the meeting Wilks explained that he had initially advocated for the flat-rate model because research indicated that approach would most effectively raise the department’s desired budgetary goals, which are needed to address additional service demands that have been placed upon the department as the district has expanded.

According to Wilks, the district’s ongoing development has resulted in a surge of emergency calls. The fire department currently projects nearly 3,600 calls just this year in the communities that comprise the Cahaba Valley, which encompasses Mt Laurel, the Narrows and Brook Highland.

“What we are trying to do is get ahead of that growth because calls are going up, and we do not want to be in a place where a call comes in and we don’t have somebody to respond. We’re trying to be proactive and plan for the future,” Wilks said.

As of June, the department has received more than 2,000 calls and is expected to exceed call volume projections by the end of the year.

Among Wilks’ most urgent priorities is raising the department’s daily number of staff to 18, which he said would adequately stock both the ambulances and fire engines at the department’s Mt Laurel and Narrows fire stations.

A secondary goal of the fire department is upgrading several of the district’s aging facilities, including replacing its 38-year-old, undersized U.S. 280 fire station with a new one on Brook Highland Parkway. Wilks said Brook Highland currently generates the highest volume of emergency calls in the district.

Based on community feedback, Wilks said he still feels comfortable recommending a fire dues increase as the primary budgetary framework for these improvements, but said the department is now suggesting four alternative fee structures, inspired largely by residential input.

“The point of these meetings has been to bring residents into the process and make them informed about what we’re trying to do and what we want to do, including how much this is going to cost, because this is your choice,” Wilks said. “We have learned a lot so far, and want to be as transparent as possible because the community will be making this decision.”

Each of the four fee structures preserves residential rates based on property value, but maintains the $5.8 million benchmark, with each proposal attempting to achieve that goal eventually.

The first proposal would be a more gradual approach, with dues increasing over a two-year period. If approved, dues would immediately be raised 35 percent this year, with an additional 30-percent hike the following year for a 65-percent total increase.

With this approach, Wilks said the department would be able to raise $4.9 million in the first year and then an additional $800,000 the following year. This amount would be sufficient to begin staff expansions, but would delay any significant facility or service improvements for at least two years.

“We’re going to be starting behind with this model, but by the second year, we would be able to get real close to our number, but we’re going to struggle getting that down payment the first year and building those reserves,” he said.

Proposals two, three and four advocate for dues hikes across the board for all residents, with the second fee structure requesting a 65-percent increase for every resident in the district, which would generate $5.6 million.

Similarly, proposal three would simply raise each resident’s $275 this year.

Proposal four is the cheapest route with just a 40-percent increase for every resident, but would only raise around $5 million, which Wilks said would delay the Brook Highlands fire station by at least four years, and that each proposal would likely postpone the construction of an additional Shoal Creek fire station indefinitely.

The most immediate impact of these facility delays would be longer emergency response times for residents, Wilks said.

“We would like to be able to start building up reserves and buying things now, but there would be a delay, but we would be glad if we could staff the fire truck in the Narrows and the ambulance in Mt Laurel so we can get some things done, but we would have to delay the Brook Highland fire station,” he said.

Residents will have the chance to vote for or against the dues increase next month as part of a special election. Wilks said the Shelby County Probate Court has selected Aug. 31 as the election date, and all registered voters who live in the district are eligible to participate.

Regardless of the outcome, Wilks said the most crucial factor in this conversation is that the district’s residents be the ones to make this important decision.

“We’ll have a vote in the district on whether to approve this, which is why we want to give residents the information about what we’re wanting to do. This is your choice, the citizens of this district, and you will vote whether we do this,” Wilks said.

The fire department is currently disseminating surveys throughout the district to determine which proposal will be selected for a ballot vote.

Any changes made to the district’s fire dues structure would go into effect Oct. 1.