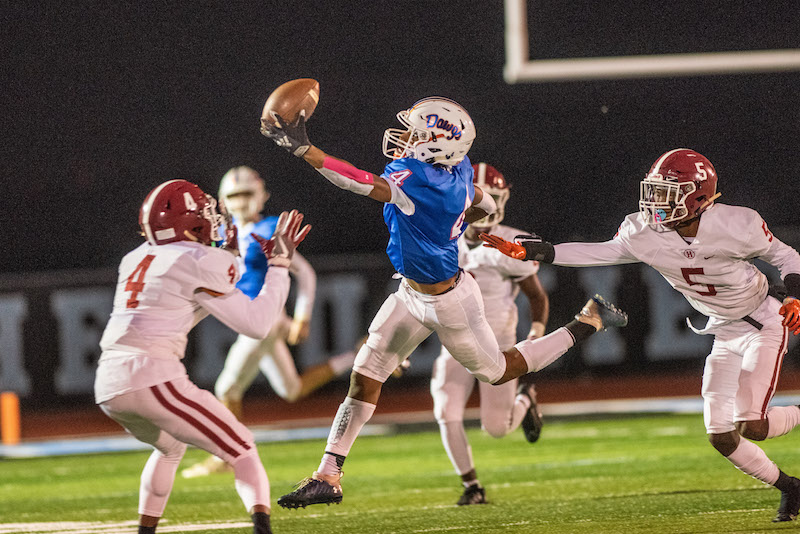 After exceeding expectations last season, the Montevallo Bulldogs return one of the top teams in Shelby County for the 2021 season. (File)

Montevallo exceeded expectations in year one under Blake Boren after finishing third in the region and advancing to the second round of the playoffs.

Now, the Bulldogs feel confident heading into his second year as the head coach.

Predicted to finish 5-5 last year after losing 95 percent of its offensive production, Montevallo put together a 6-6 regular season and then upset St. James 27-21 in the first round of the playoffs.

Heading into the 2021 season, there is plenty of reason for optimism, not only because the team is used to Boren, but because they have back 90 percent of the team.

That, however, will largely depend on how Kial Cottingham handles taking over at quarterback this year.

One of the positions that does need to be filled, Cottingham won’t be an unfamiliar face in the offense—or the team for that matter.

Last season, he totaled 621 yards and five touchdowns receiving, while also putting together six interceptions and 31 tackles on defense to become an All-State player.

As the team’s best athlete, Boren couldn’t have him not touch the ball, and he has developed a passing game to pair with his athleticism that could be lethal.

Taking pressure off of him will be the return of one of the state’s top running backs.

After starting last year and playing in several games as a sophomore, Joseph Anderson will return to the position for his senior season after totaling 1,156 yards and 16 touchdowns on the ground last year as well as 109 yards on 12 receptions.

With he and Cottingham touching the ball on most plays, the Bulldogs should have one of the state’s most dangerous offenses in Class 4A.

But it doesn’t stop there.

Kam’Ron Goins is also back as a flex receiver/running back, who can make big plays due to his 4.5-second speed. Sophomore Javon Rogers adds a taller target, and the coaches expect him to become an elite player this season.

What makes this year’s offense so dangerous, however, is the return of four starters on the offensive line.

Cole Dennis and Dylan Campbell will anchor the line, while Brantley Burk and Jaylon Hudson are both back as starters as well. The Bulldogs will turn to newcomer Jaylen Williams to close out the position, but the unit as a whole completes a scary offense.

The defense could continue to be the main issue for Montevallo this season, as the Bulldogs attempt to build depth with a young roster.

Last season, they gave up an average of 33 points per game, including 28 or more in five of eight games and 20 or more in every head-to-head game last year.

Improving those numbers will be key in determining the postseason success of this year’s team.

A benefit will be the defensive front with Campbell playing a key role as a returnee, while 6-foot-3, 320-pound nose guard Richard Smith will also add a good frame. Jaylen Williams and Dennis could also play on both sides of the ball, while senior defensive end Jayden Head should be a contributor.

The linebacker position was the concerning aspect of last year’s team, and that may be the case again this season.

This year, there is at least a better feel of who will hold down different positions in the unit thanks to Jamion Prentice, EJ Morton and Charlie Adams all expected to be important players.

That said, there is still a lack of experience and depth going into the season that will have to step up to help the team reach its full potential.

Backing them up, however, will be a deep secondary.

Cottingham is a reigning All-State player at the position and will play when needed, but will try to focus on quarterback.

Even without him, Braxton King is probably the team’s fastest player and will handle a key role at cornerback. He’ll be joined by Payton King, Anthony Martin and Peanut Purnell as leaders of an athletic and speedy unit.

Prediction (7-3): Considering the Bulldogs will play traditional top-five teams American Christian and Bibb County early in the season, a 7-3 record isn’t too shabby. Looking at what the Bulldogs did last year, they should be even better this year under Boren in his second season with most of the team’s talent back. How Kial Cottingham handles the quarterback position will be one key, while depth will be the other. The Bulldogs will have a tough start to the season with two games against 5A teams in non-region action and the top two teams in the region to kick off region play. Winning one or two of those games will put them ahead of last year’s 0-4 start, and I think that is a real possibility. Boren has shown what he can do as a coach, while the program as a whole seems to be on the rise. If things pan out properly and the team reaches its full potential, they could be a third-round team this season.

Get to know Athlete of the Week Eleanor De…