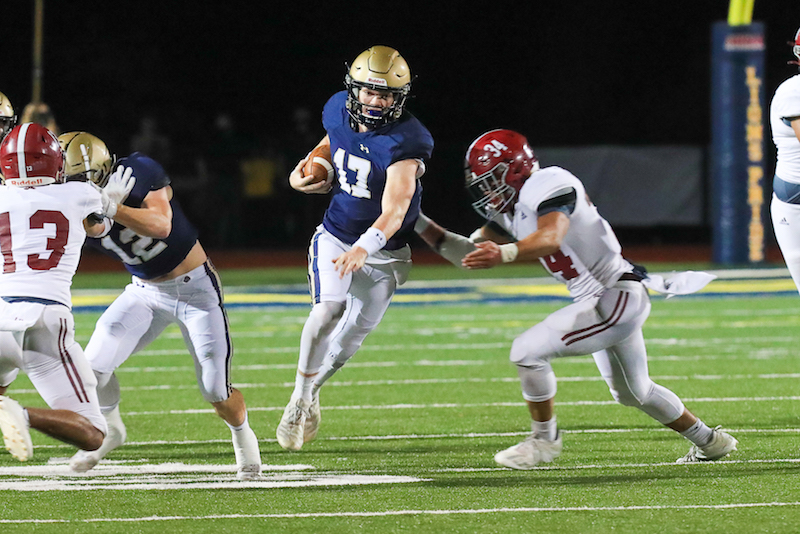 Briarwood quarterback Christopher Vizzina has become one of the hottest recruits in the state of Alabama during the offseason. He'll look to lead the Lions to another impressive season as a junior this year. (File)

After starting the previous two seasons for the Briarwood Lions, Vizzina has emerged this summer as one of the top football players in the country thanks to his performance at different prospect camps as he heads into his third season as a starter.

Going into his freshman season, Vizzina wasn’t entirely sure he would be given a varsity jersey, but that changed quickly, as the fast-paced start to his high school career had just begun.

“I got my first offer to UAB the summer before my freshman year, but my freshman year quickly became crazy because everything happened so quickly,” Vizzina said. “My only goal that season was to dress out on varsity, and then when our quarterback got hurt in the second game of the season, I was thrown in there. That’s when reality set in for me. It was definitely weird walking into that huddle as a 14-year-old telling the play to a bunch of 18-year-olds that I barely knew. I tried to be that leader that they needed in that moment, and once I got through that moment, I continued that leadership through the rest of the season.”

Vizzina continued to improve over the course of his freshman season, leading the Lions to 11 straight victories after losing the game in which he first made an appearance.

Briarwood finished that season 12-2 and lost in the semifinals to Pleasant Grove by only two points. That season got the entire Briarwood community excited for what they would get out of Vizzina over the next three years, but he knew that he wanted to improve.

“When sophomore year came around, I knew that everyone saw what I could do, but I had to take it to another level to become the quarterback I knew I could be,” he said. “I was tall but way too skinny, so I put on a lot of weight and put in a lot of work. This was our first year in 6A, and I think moving up a classification forced me to become stronger mentally and physically; and it was a great experience for me because I had to step up to the challenge.”

In his sophomore season, Vizzina threw for 1,969 yards and 13 touchdowns en route to leading Briarwood to an 8-3 record with a second-round playoff loss to Oxford, who was the reigning 6A State Champion.

Now, looking forward to his junior season, Vizzina thinks that the work that has been put in by everyone this offseason will translate successfully to the field.

“I’m very confident in this team. We’re going to have a really good offense, and even though we lost some key pieces on defense, they’ve been working every day to improve, and I think they’re going to shock a lot of people,” he said.

One of the biggest keys to the team’s success, however, will come at the receiver position.

During his freshman season, Vizzina didn’t find that connection, which forced him to leave the pocket early at times. Last year, he found it with Brooks Donnelly, but it formed later in the season.

This year, forming that connection early with several players could make the Lions one of the best offenses in the state, especially with Luke Reebals back at running back.“A lot of guys are stepping up at receiver. Having that one receiver that you can trust in any situation to throw the ball to is obviously very important, but the thing that excites me the most is that there are a bunch of guys that are emerging as someone that I can always get the ball to,” Vizzina said. “We’ve had some great receivers over the past couple years, and all the guys this year had been sitting behind them, watching them, studying their footwork and releases, and watching what works and what doesn’t. I think that is going to give us a bunch of options out wide.”

Playing football since the fourth grade, he only started playing quarterback in eighth grade, a year before he took over as a starter in high school.

In love with the game already, he quickly found a new passion for it and put work in every day to improve.

“Quarterback is a fun position to play because you always get to have the ball and you always get to be the guy to set the course of the game and have the ability to affect the outcome of the game more than anyone else,” Vizzina said. “It’s also cool when you’re walking around somewhere with a Briarwood shirt on and people recognize you and come up to you. It makes you feel like you’re doing something right. I’m very thankful for the ability I have been given, and everything that the game of football has brought me.”

And getting to play in big games at a young age seemed to take his performance to the next level because of what it did to his confidence.

“Playing in some important games at a young age boosted my confidence in myself, because once you get in big moments later on in the season, you can think back and know that you’ve been in moments like this before, and you’re built to succeed in this moment,” Vizzina said. “You think to yourself, ‘I’ve done this before, I’ve completed this pass before, I’ve made this read before.’”

That led to his game reaching a new high as a sophomore, and the work outside of the season has led to him becoming one of the top quarterbacks in the country.

Competing in camps almost every week this summer, he has taken on some of the best at the position, including the top quarterback in the country in Arch Manning, and he hasn’t backed down from the challenge.

It has earned him offers from the likes of Arkansas, Kentucky, Michigan State, Mississippi State, Duke, Louisville, Oklahoma State and many other major Division I programs.

“It’s been an amazing experience going to all these camps and workouts for teams. I’ve met great coaches and great players. I went to four camps this summer, threw for some colleges and have been constantly working to better myself,” he said. “Going into to these camps, you obviously have that mentality that you’re a special player, and then when you throw alongside players that are just like you, that competitive mentality sets in where you want to prove to these coaches that you’re the best. I want to go to these camps to compete and work and get better, not just to say ‘Oh, this is really cool.’ I got to compete against players like Arch Manning, and I got to battle it out with him. I think that kind of let me and the coaches know that I can hang with the best of them.”

But Vizzina will still be the first to tell you he still has room for improvement.

“The biggest thing I’ve worked on this offseason is consistency. Having consistency in everything you do is so important. Having consistent footwork, the same release on every throw and on different throwing angles,” he said. “Ben Neil at Quarterback Country has helped me with all of that more than I can explain. He’s helped me from the mental side of the position as well. I’ve also been watching more film than I ever have, changing how I watch film, going over coverages, and I think that drive to improve in all aspects of the game is what separates me.”

He also said his relationship with head coach Matthew Forester has helped him feel more and more comfortable each year, which is a major reason he feels confident going into this season.

“I’m looking forward to playing with this group of seniors and doing my part to send them out on a high note. I’m also excited to play with a lot of my best friends that I haven’t really gotten to play with so far in high school because I’ve been on varsity since my freshman year,” Vizzina said. “Even though I became really close with the last two senior classes, this team, this year is something really special because I’m playing with my best friends that I’ve grown up with.”