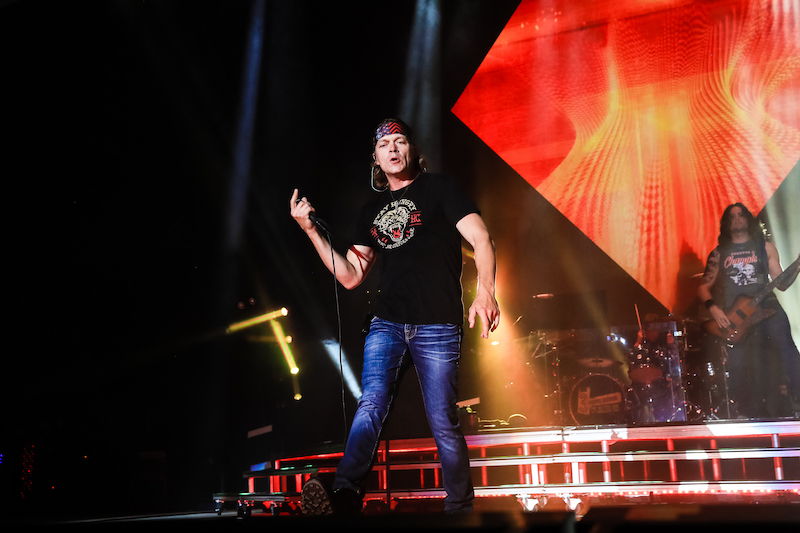 3 Doors Down and Seether played the first major show at Oak Mountain Amphitheater on July 24. (For the Reporter/Dawn Harrison)

Walking into Oak Mountain Amphitheater on July 24 felt like stepping into a time machine.

It had been more than 15 months since a concert was held there, and even more since the last time I personally went to one.

While it was important to do what we could to keep each other safe over the last year, all of us missed having the opportunity to experience something fun like concerts with hundreds or even thousands of other people.

That sort of collective experience is something we have come to take for granted. A digital space can never recreate the blasting of music over loudspeakers, thousands of fans singing their favorite songs at the top of their lungs and the thrill of seeing your favorite acts in person.

For the first time in a long time, that was possible again.

More than 6,000 people came out to Oak Mountain Amphitheater to see 3 Doors Down and Seether that night.

It was also a fitting way to return to live concerts since the two bands have a number of notable hits between them, and offer something for fans of a wide variety of genres.

As the bands played through their sets full of hits for casual fans, and deep cuts for the more hardcore listeners, I began to notice some of the usual suspects.

Anyone who has ever been to concert has likely seen that one guy who gets really drunk and takes his shirt off and screams the whole time for no reason. This show had several of those guys.

While I might usually find that annoying, this time I got it.  I wasn’t going to be that guy by any means, but I could understand the feeling of wanting to let go like that. Because of the familiarity of the situation, it actually added to that theme of returning to normal.

While it was just a concert, it meant a different something to most of the people there. For me, it reminded me of my dad.

We would listen to both of these bands together a lot. Even though he’s been gone for nearly four years, the show sparked that connection and brought back great memories from a different time.

While there were those drunk guys going crazy for their favorite bands, there were also moms and dads bringing their kids out to potentially their first concert. Just taking a look around, you could see those types of connections actively being made.

That’s why live events are important. They are fun, they are entertaining and they are lucrative for the area they happen in, but they also create memories that can last a lifetime.