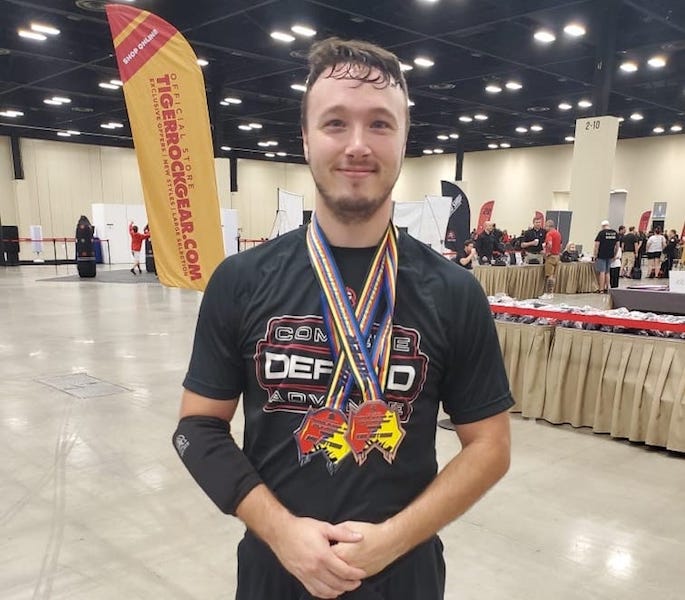 Spates is a sixth-degree blackbelt and the lead instructor and academy manager at Tiger-Rock, according to Crystal Knezek.

This tournament is an annual event that has students and instructors at Tiger-Rock locations across the country come together to compete in a range of events.

“Spates competed in the highest-ranking adult competition, fifth and sixth degree blackbelts, and won his Masters’ Ring Saturday, July 24 to qualify for the Finals Event on Sunday, July 25,” Knezek said. “Despite falling 7-2 in the final two-minute sparring round to Sixth-Degree Master Britt Harrell of Tiger-Rock Martial Arts of Shreveport, LA, the defending Tiger-Rock Sparring World Champion, Spates pushed through the very best and most experienced competitors, topping Sixth-Degree Master Payton Donnell of Tiger-Rock Martial Arts of Olathe KS to earn his spot in his first finals event.”

During the championship, Spates also competed in the forms competition. During this event, he progressed through several rounds before falling in the Masters Ring finals.

“Master Spates’ world tournament results are impressive accolades to add to a busy two-year-stretch that saw him plan and open the brand-new Tiger-Rock Martial Arts Alabaster location in the Fall of 2019 and earn his sixth-degree master’s belt, testing before a panel of Tiger-Rock Grand Masters, in the summer of 2020,” Knezek said. “He has high expectations for himself and for his students because he cares greatly that they reach their goals, whether that is in martial arts or in another area of their lives. His work ethic and passion for the sport can be observed every day while he’s on the mat teaching classes.”

Spates attributes his success in these competitions to his students, who he said pushes him to “improve and maintain a high standard so as to be a good role model.”

Spates achieved this accomplishment after 20 years of martial arts experience and 10 years of instruction experience.