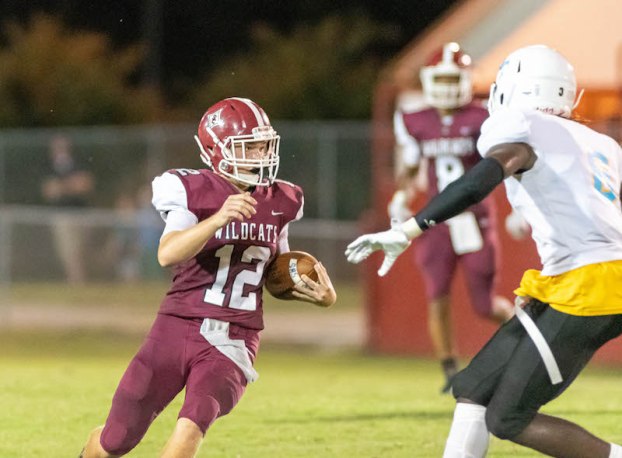 Shelby County’s Connor Aderholt will return as this year’s starting quarterback, hoping to lead the Wildcats to a second playoff berth in a row during the 2021 season under new head coach Zeb Ellison. (File)

The city of Columbiana let out a joyous belt when it was announced that Zeb Ellison would take over as the next Shelby County High School head football coach ahead of the 2021 season.

A graduate and former player for the Wildcats, Ellison has brought new-found excitement to the team with his coaching philosophy, which has added to the buildup for the upcoming year.

Coming off of the first playoff appearance since 2009, Shelby County already had high hopes for what was possible this season, but those hopes have now soared through the roof.

The Wildcats, however, will still have plenty to prove coming off last year’s 6-4 season, especially with the departure of several key playmakers on this year’s roster.

That became the ultimate difference in the team going 6-4 instead of 3-7. Especially when you consider that the offense scored almost 10 less points per game last year.

The defense was actually the difference maker, which is a trend that needs to continue this season.

Offensively, however, the Wildcats will hope to do a 360 and return to the form of 2019’s success.

The return of senior starting quarterback Connor Aderholt should help in that regard.

It’s unknown if Shelby County will continue running the triple option under Ellison, but there will likely be some tweaks to the offense.

Aderholt adds the perfect presence to help lead the team through the transition. A leader for the team, Ellison said he will open up what is possible for the offense.

It also helps that he’ll be joined by returning running back Evan Joiner, as well as other talented backs such as Connor Rigney, Bradley Horton and Jaylen Mayfield.

Joiner totaled 798 yards and 15 touchdowns last year, and is a thumper out of the backfield, while Rigney could emerge as the lead back this season due to his quick first three steps and his athleticism.

That duo, alongside others and Aderholt, should give the Wildcats confidence in the run game.

The receiver position, however, has been neglected for the most part the last several years, and depth will be difficult to build in year one for Ellison.

Going into fall practice, senior Matthew Pearson and junior Noah Reed are the two standing out at the position, but they’ll be learning new roles.

To reach their potential as an offense, the passing game has to emerge, even if you’re a run first team.

Helping the entire offense will be the return of Ryan Woods and Tanner Stogner.

Those two are the only starters back with the Wildcats forced to replace All-State lineman J.T. Pennington as well as Micah Hughes and Kai Barnett.

Woods and Tanner bring a strong frame to the table that should help fill the void. Woods stands at 6-foot-6, 305 pounds, while Stogner is now 6-foot-3, 280 pounds.

If two or three others can separate themselves as starters, the Wildcats’ offense will be in ideal shape.

The defensive line will also return two starters this year thanks to Nathan Lansford and Jessie Carter. The two leaders were key last year, and will look to be leaders for a unit hoping to build off last year’s success.

Montana Wages will join them as a nose guard, while Kevin Arteaga and Landen Sheffield should earn time as well.

At linebacker, there seems to be a few question marks, but Will Price and Bradley Horton look to be the leaders with playing time last year. Beyond that, others have yet to separate themselves.

On the back end of the defense, Reed and Pearson will be two-way athletes in the secondary as experienced leaders, while sophomores Coby Moore and Micah Swain should also have big seasons to help create a strong unit.

Prediction (7-3): Only four of Shelby County’s nine opponents had a winning record a season ago, and just two of those were in region play. The Wildcats gained a lot of confidence with last year’s winning record and playoff berth. Now, they have an extra spark with a new head coach who is community oriented and will do everything he can to put together a successful group. The Wildcats return plenty on offense and should be improved on that side of the ball as long as the offensive line can find the right pieces and the offense as a whole can handle any changes. Defensively, the Wildcats had a remarkable turnaround last year and have one of the best defensive coaches in the area as their head coach. That should help Shelby County put together another strong year on that side of the ball. If that happens, it’s tough to see the Wildcats doing any worse than last year’s 6-4 record, which would mean a second-consecutive playoff berth.